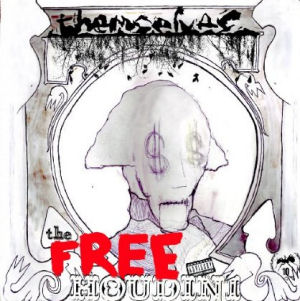 It is difficult to determine Themselves’ target audience. On the one hand, their atypical style is a deliberate critique of traditional rap. As such, it is near impossible to appreciate Doseone and Jel, the MC and producer comprising Themselves, unless one has a deep appreciation for rap in the first place. On the other hand, if one truly loves rap for what it is, then something this far outside of the norm loses its appeal. Thus, this Anticon duo fills a strange niche; to consider Themselves innovative, you can’t appreciate their innovations.

So how to deal with this apparent paradox? Despite the fact that theFREEHoudini has no obvious potential listeners, the mixtape basically succeeds. How can this be accounted for? Themselves’ own answer would be: who fucking cares if anyone likes us? As Dose and fellow ClouDdead MC Yoni Wolf proclaim on “Rapping 4 Money” — ironically perhaps the most accessible track on the tape, with its jazz-heavy beat and intricate meta-rap wordplay — “I ain’t rapping for money/locusts, God and honey.” As Anticon founder Sole rambles through grinding distortion on “1 for No Money,” “This isn’t a mix tape; it’s an I don’t give a fuck tape.” Dose’s voice is more a growl than anything near a typical flow. Jel’s beats constantly diverge from the normal boom-bap, influenced as much by Trent Reznor as Jam Mater Jay. In short, part of the album’s appeal is its unabashed iconoclasm.

Still, Dose’s constant need to be different can get in the way as much as it can provoke interest. One’s voice, while intriguing, is far from pleasant, sometimes bordering on unlistenable. On “Swarm of Beeii,” for example, his abrasive, guttural rantings seem almost sadistic in their harshness. When he tends towards more traditional stylings, such as on the battle-formatted “Rappers Are Interns,” he can feel out-of-place. While Jel usually hits his mark, save a few unnecessary growling sounds on “Long Time Coming” following the refreshingly familiar verse of Lionesque, I could not listen to a whole album of Dose rapping.

Fortunately, Themselves compensate for this shortcoming, intentionally or not, with an array of much-needed guest appearances, who tend to be much more accessible than Themselves’ frontman. Aesop Rock spits “strictly shark tank shit” in rapid fire over Jel’s brilliant three-chord electric guitar progression and busy drums on “Know That To Know This.” Sole gives us a healthy dose of his unique brand of intelligent angst on “1 for No Money.” Busdriver’s sing-songy delivery provides much needed light-heartedness on “Party Rap Sucks,” and Serengeti’s patient pontifications provide a nice juxtaposition with One’s manic approach on “Keys to Ignition.” Part of what saves this album is Doseone’s own humility in allowing others to take center stage.

Moreover, while they would never admit it, Themselves are not entirely without pop sensibilities. Jel’s beats, while busy and dissonant, are far from arrhythmic. Dose, while not a good singer in any traditional sense, has a good sense of melody and an even better sense of how to use his strange muffled soprano. I could hardly believe my ears when I realized that there is a catchy melody lurking somewhere below the buzzings and static of “Roman is as Roman Does.”

Perhaps, then, Themselves do have a niche. They are not for rap purists; they are not for hip-hop newcomers. But they are for faithful listeners, sick of what they’ve been hearing, but not ready to give up entirely.