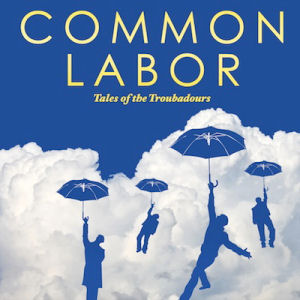 Common Labor :: Tales of the Troubadours

Analyrical rated the praise of “a promising debut” from Patrick Taylor on “First Date” back in 2010. Since then the Minnesotan emcee has linked up with producer/emcee Phingazto form Common Labor. An’s label Background Noise Crew describes this tandem in a way some readers may initially find off-putting: “Common Labor isn’t another Hip-Hop act; they are barely a Hip-Hop act at all.”

Don’t get it twisted from the hyperbole. Record labels are often overly anxious to make their album stand out, particularly these days in an overly crowded marketplace, where half of what’s being marketed comes with a “name your own price (or free)” that’s hard to beat. Thankfully this album is NOT in the “not rap” rap category. This isn’tThe Jet Age of Tomorrow or 3:33, where producers expand their minds (and presumably yours) sans rhymes. Lyrics are very much part of the package and delivered intensely on funky grooves like “Here For You Too (Dreamer of Dreams)” – a tribute to the late great Eyedea:

“I dream of many things, most that I learned from you
I’m on a mental sting, hopin to find the truth
I heard your voice and let the words crash against me
Advice and sacrifice but the tank is never empty
I know you held it high – the way you kill the rhyme
The way you made it, create it like it was built to shine
I hung my head upon, everything you said
and it was stuck inside my brain and even every single step
But I LEAPT! And I trusted all your insight
The way that you led me and taught me its always been right
I hold your music as a muse to my own
And you influence the student to go and choose the microphone
And no regrets, we progress with this artform
We take it to the max, living sounding hardcore
And I can see it in the words that you speak
Yes Mikey, you were the dreamer of dreams”

The Common Labor team could be called “progressive” and would probably be comfortable with that, but also come from a long tradition of rap artists who break the wheel just so they can reinvent it. That’s precisely what’s going on with “Burn Down the Old School,” which is not an attack on their lyrical predecessors, but a metaphor for how everything gets upgraded and how obsolences is built into our daily lives. The song could be said to do that itself given it’s built on a quirky folsky instrumental, complete with shimmering tamborine, that’s not like anything youUSUALLY blast out your stereo:

“You live day to day on a private farm
But now they pick fruit with bionic arms
I’m lazy as hell, no doubt about it
Was never satisfied with my allowance
We drink that air where the water’s clean
Break old habits, start a new routine
Forget about all those trend machines
cause he already on to the next thing!”

It is perhaps unfair to stereotype Minnesota rappers as embracing the experimental and cutting edge side of hip-hop, and yet as the ancestral home of Rhymesayers Entertainment it’s a hard image to shake off. Common Labor isn’t even trying to. They’re perfectly happy keeping it totally different from everybody else. “Pull Me” is an instrumental built almost entirely around clapping claves, and the singing between raps is just as integral to the song as the other way around. “It’s too hard to suck out the poison/it’s too hard to trust in you/but all this hurt I’ve been avoiding/I grabbed on and busted through.” They do exactly that – bust through – from the dirty amplifier boom bap of “Running Away” to the almost Toto-esque “Dust Storm.” In fact if Common Labor decided to sample “Africa” in a song and rap over it, I’d probably dig it, but they eschew familiar samples in favor of creating something others probably WILL sample in the future. Now can you dig that? It’s not your father’s or your grandfather’s rap, but it’s something new worth listening to.