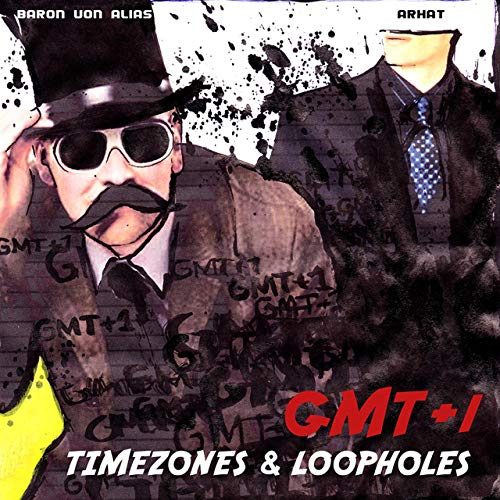 What time is it?!? That was a question posed in 1982 by Morris Day & The Time. Moving forward, we’ve had Public Enemy’s Flavor Flav with his ever-present clock, the now re-emerging O.C. who once proclaimed that “Time’s Up” and a cast of others that have worked a time-based theme. Even Baron Von Alias himself has visited the concept on his previous release, “Timepiece”. This time around, Alias aligns himself with his long-time partner in crime, Arhat. The last collaborative effort between these two, “The 13th Hour”, was released in 2007. Keeping with the time element, this release is called “GMT+1-Timezones & Loopholes”.

For awhile, GMT was more like WTF to me. I’d see it when registering for a forum or something, but rarely gave a thought to what it actually stood for. As time went on, I just applied my now memorized setting of GMT-5 and kept it moving. Officially, GMT stands for Greenwich Mean Time and is the basis of world time. Baron and many of the guest emcees on the album hail from Newcastle which is in GMT+0. So why name the project “GMT+1”? Well, Arhat is from the Netherlands which is in the GMT+1 zone, but I think the bigger idea was to live in the future.

The album opens with “Timezones & Loopholes” and “State Of Fury”. The former confirms my aforementioned theory as Baron mentions being “an hour in the future”, “sampling time” and “repeating it over and over”. The beat serves as an exceptional introduction to the production of Arhat, as many of the songs are built on the same deep drum kicks and snares. “Echoes” effectively utilizes the sample from the classic Shuggie Otis song, “Aht Uh Mi Hed” while Lims and Spuggy Fits lend verses to “Curse Of The Missed Opportunities”. The big band feel of “Ahead Of Myself” helps to make it one of the standout tracks on the album.

There are a few songs on “GMT+1” that feature some (or in one case, all) lyrics in a foreign language. Thanks to the handy dandy Google Translate website, I determined that the language was Dutch and the titles of “Hartstikke Dood”, “Het Wakend Oog Ziet” and “Het Oog von de Storm” translate to “Awfully Dead”, “The Waking (or Watching) Eye Behold” and “Eye Of The Storm”. I really hope I’m not completely off with those translations, as I’m sure I’d get a few emails about it. “Suspended Animation” and “Time Keeping” get back on the English-speaking side of things and once again revisit the time element.

“Start Again”, “Vicious Circle” and “Underground” bring the album to a close. In either a stroke of genius or just a glitch in the downloaded track, the beat to “Start Again” begins and abruptly stops for a brief moment before picking back up. The song itself features an emcee named Fear and focuses on leaving the past in the past and learning to grow. “Underground” is one of the faster paced songs on the album and poses a question about who actually decides on what gets labeled as “underground” and what doesn’t.

On a whole, I feel that when BVA focuses on delivering a tight flow, he is at his best. That’s not to say that the other portions of the album are inferior, because they aren’t. But at times the message can be lost on the listener. Arhat’s production is solid and head-nod inducing for the most part and still comes off pleasing when he decides to venture outside of what seems to be his comfort zone. As a new listener to both Baron and Arhat, it was a pleasurable trip. As I mentioned before, I live in GMT-5, which is on the other side of the big pond, but this album has enough going for it that it should garner a listen or two from heads in every time zone.