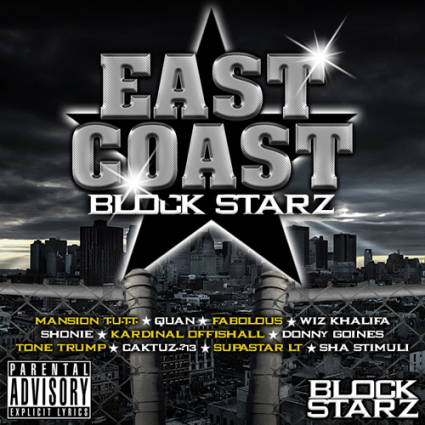 From what I understand Block Starz Music offers various services to musicians along the lines of promotion and distribution, specifically tailored to the digital age. “East Coast Block Starz” is a compilation that isn’t given away for free like so many mixtapes these days but instead promises to deliver your money’s worth. Ten months ago RapReviews writer DJ Complejo was hoping for an East Coast edition while reviewing the “West Coast Block Starz,” and here it is, 17 single tracks of contemporary East Coast rap.

While most mixtapes these days focus on one style, genre, artist, or camp (and often purposely act as if that’s all there is), “East Coast Block Starz” offers a comparatively wide range of talent, some of the newcomers even getting assistance from established acts such as Fabolous, Kardinal Offishall and DJ Revolution. Not all of them have a Wiki entry or Twitter account yet, but with one exception they’re all present on the web.

It is tempting to put “East Coast Block Starz” in the juicer to extract the essence of today’s East Coast rap. But there simply is no essence. From Harlem’s Donny Goines arguing that New York doesn’t need to be brought back but brought forward (“Bring it Forward”), to Philly rapper Tone Trump relying on cutting keyboards and an Akon-stand-in singer, this sampler confirms that the East Coast is still disorientated. He’s recorded with Sticky Fingaz and Nas, but the streets demand his talents as well, at least that’s what Quan tells us in “Streetz Keep Callin’.” Sound familiar? Da Bronx’ Goldo Da Beast gives his best bedroom interpretation of Atlanta trap rap on “Saturday Night Live.” You want more homemade? Check Wordspit’s “Poet’s Haiku,” which creatively has its moments but puts a dent in the credibility of a label that offers to professionalize your efforts. North Carolina’s Caktuz..?13 mashes high voltage guitars with dirty south drawl on “Suphabaad!” I’d suggest a signing with Tech N9ne’s Strange Music if Brooklyn’s spastic spitters A2uce didn’t deserve it more with their self-titled track’s sluggish future funk.

On the other end of the spectrum we have R&B-driven songs, notably non-offending. The origins of singer Shonie, signed to Slip-N-Slide, are unknown, but guest Fabolos displays the usual finesse on “Can’t Let Go.” Representing Richmond, VA, C. Gillie makes us believe that his object of obsession “Got it Got It” (with singer Francoise providing the song with a nice metaphorical slant), while Dramills and Raheem DeVaughn extend Charles Hamilton’s “Brooklyn Girls” to “New York Girls.”

SupaStar LT decides to play it safe with the bubblegum crunk of “I Love My City.” The Dallas native has a right to sound a little bit southern, but if you spend your formative years in Boston and decide to write a song called “I Love My City,” one would expect to learn from the song’s content which city actually gets the dedication. Leave it to vet Kardinal Offishall to rep his city correctly, while the track’s other guest, Red Cafe, seems to have his mind anywhere but in Brooklyn. Still he’ll probably subscribe to the sentiment of St. Laz and Valdon’s heartfelt “Bury Me in Brooklyn.”

“Had a session in the Stu with some young rapper dudes
with Range Rovers and Benzes and flashy-ass jewels
and bottles inside the booth
They doin’ better than you, Stimuli!
But when they rapped, they were trash
paid me bread for a verse, and I was gased
I could see the hustler in ’em, they throwin’ cash
like it’s nothin’, I was buggin’, I gotta get off my ass
I need to get back to the streets, I was ponderin’
I’m here attackin’ the beast, these cats squanderin’
money inside the clubs
Should I quit and sell drugs?
Risk prison or just keep on spittin’?
I need to get it
Right now”

Maybe he needs one of these gimmicky self-fulfilling-prophecy songs like Throwback and Wiz Khalifa’s “Was It,” which ponders what exactly out of the many amazing things about them attracts all the attention. A low point is reached with the mundane “All-Star Dough” by Trenton’s Money First. (What would Wise Intelligent say?) The Philly trio of Mansion TUTT, Oschino and D-Slim coast on the soulful beat that carries “Been Hustla, Been Gangsta.” If their hustler gab sums up to elaborate nonsense, fellow Philadelphian (and Freeway lookalike) Tone Trump relies on solid penmanship and a semi-conscience over the glossy thug thump of “How I’m Livin’.”

I can’t say I’m impressed. “East Coast Block Starz” offers a little bit more than the pop thugs that rotate through the digital mixtape circuit, but it is in every way generic, right down to Bekay’s “I Am,” which turns out okay (and it should when you have DJ Rev and ALC on your side), but whose definition of hip-hop is still very New York-centric. Someone needs to put the East Coast out of its identity crisis. My bet is it’s not going to be anyone on this compilation, but I’ll still keep an eye out for Donny Goines, Tone Trump, St. Laz and A2uce.