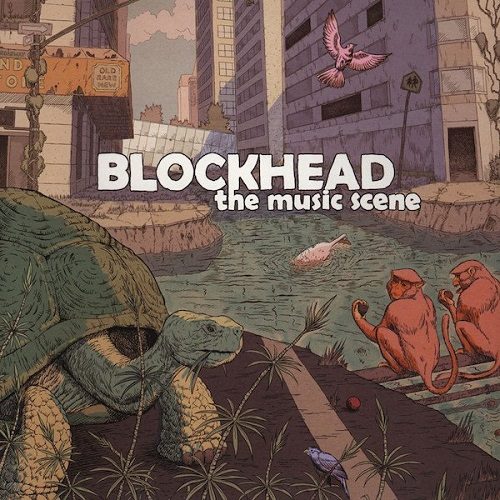 “It’s Raining Clouds,” the opening track on NY beatmaker Blockhead’s new album, starts off with booming drums, a melancholy mood, and scratched-in samples.  It sounds like the kind of beat DJ Shadow was making before he changed trajectory after “Endtroducing…” So does the majority of “The Music Scene,” Blockhead’s fourth album of instrumental hip hop. Although best known as Aesop Rock’s go-to beatsmith, Blockhead has been releasing solo work since 2004, almost all on London’s Ninja Tune label.

Ninja Tune is a good indication of where this album’s head is at. They are known for downtempo and electronic music, although they do dabble in hip hop. The label comes from an electronic music background, and as a result “The Music Scene” feels as much like an electronic album as a hip hop beat record. I’ve gotten used to the Stones Throw model of instrumental hip hop albums, in which the tracks are more sketches than fully fleshed out songs. None of the songs on any of Oh No or Madlib or Dilla’s beat albums on Stones Throw are longer than two minutes. By contrast, nothing on “The Music Scene” is shorter than four minutes, and several songs clear the six-minute mark.

The benefit of these longer track times is that the listener has more time to spend with the song, and Blockhead has more room to build a mood. And that’s precisely what he does over the album’s sixty minute run time. There is a mellow, sad quality to the songs on “The Music Scene.” They are almost all midtempo or downtempo, with the programmed drums chugging along at a leisurely pace while Blockhead piles on samples. The downside is that I can’t see any rappers mining “The Music Scene” for beats to rap over. You probably aren’t going to hear Mos Def or DOOM or even Aesop Rock rhyming over “Attack the Doctor” anytime soon.

The title track perhaps says it best, opening with a song that goes “The music scene has got me down/’cause I don’t want to be a clown.” There’s a bass line, percussion, thwapping drums, into which he layers synth flourishes, a piano line, and various other samples. Like most of the songs on the album, it seems straight forward at first, but reveals depth on repeated listens. All of the different sounds are deliberate, and you get the sense that if you listen closely enough, you’ll discover the ideas and emotions that Blockhead is trying to express in his songs.

“Tricky Turtle” is the funkiest song on the album, with it’s horns, disco drums, and sample of African singing. “The Prettiest Sea Slug” has a bossa nova feel, while “Which One of You Jerks Drank My Arnold Palmer” mixes psychedelic guitar, booming drums, and blaring horns into a headnodding concoction.  “The Daily Routine” features a metal bass line, which is contrasted with classical guitar, a downtempo house beat,  and samples of a couple fighting. It’s a menacing song, and I found myself hitting the skip button whenever it came on.”Four Walls” sounds like Portishead with a screwed and chopped T-Pain doing vocals, with a ripping guitar solo straight out of Steve Vai at the end. It all ends with the jazzy shuffle of “Farewell Spacemen.”

At the end of the day, “The Music Scene” is a good album, but one that is hard to get excited about. It’s a downtempo instrumental hip hop album that sounds like, well, a downtempo instrumental hip hop album. It doesn’t blaze any new territory and it doesn’t throw any curveballs. It just sorta chugs along in it’s mellow, melancholy way. It’s not game-changing, but it is a pleasant distraction, and nice background music for a rainy winter day. Fans of “Entroducing…” should check this out, and while you’re at it, take at look at his blog, Phat Friend.