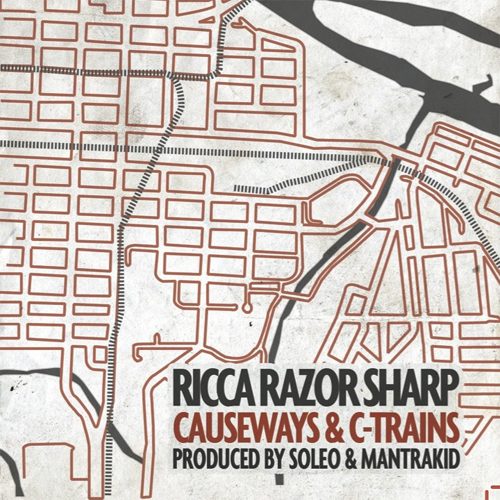 From the land of the Hart Family Dungeon and the Calgary Flames comes Ricca Razor Sharp, who also goes by the government name Jonathan Stoddart. Stoddart owns 50% of Neferiu Records, which not coincidentally is the label releasing his album “Causeways & C-Trains.” Skeptics among the readership will have already written Ricca off at this point, but those who know about the Canadian rap scene realize many of its best artists are self-produced or distributed. In Ricca’s case only the latter is true as he has called in outside artists to put his album together musically – Calgary’s own SoLeo and Vancouver Island’s producer du jour Mantrakid. In a sense this could be considered to be an all-star underground Canadian collaboration, especially given that Ricca may be Calgary by association but originally hails from Clarks Harbour, Nova Scotia.

Despite that entirely Canadian lineup, Ricca Razor Sharp doesn’t have any of the frozen tundra stereotypes of a ruggedly independent self-distributed rapper from the Great White North. In fact if you were given “Causeways & C-Trains” without a press kit or any background on the man behind it, you might think Ricca was a California suburbanite who alternates between hanging out with Asher Roth, the Kottonmouth Kings and Linkin Park. That’s not meant as a knock. While each of those artists has their fans and their detractors, the one thing they’ve all got in common is a cult following and some degree of commercial success. Ricca would have no problem opening for any of these artists on tour or appealing to their same fanbase, as he has a serious lyrical presentation clearly informed by a middle class lifestyle. When rappers try to be apologetic about that background they undermine the validity of their very presentation, and Ricca makes no apologies for his white boy sound or Canadian heritage on “Rampage”:

“Here it is fresh frozen
Guerilla webcam, causing a commotion
From the prairie plains to the ocean
Y’all get busy with this dizzy Nova Scotian
Now a Maritime ex-pat’
Calgary, Alberta you can check that
I’ve been in the Wild Rose son
since the year of the Y2K, minus one
In the meantime, rocked mad crews
Made mad moves and I paid mad dues
…
Put work on the underground scene
Which means, there ain’t a whole lot I never seen
I’m not seen on the cover of magazines
But people on the scene steady recognizin me”

Incidentally Wild Rose is a microbrewery in Calgary that describes their product as “the wildest microbrewed beer around.” Wild would be a pretty apt description of Ricca Razor as well, an artist who is never soft spoken or lacking ego about his abilities. When he cranks up his flow to the maximum on “Dassay” he proves he can hang with the speediest and most loquacious of lyricists:

“Well my lyrical agility thrills your sensibilities
Tranquility is killed by my lyrical artillery
My TNT combined with ability kills, so why you grillin me?
You know your rhymes ain’t worth a hill of beans
Silly me, it’s a matter of moxie
I’m foxy, another rapper can’t stop me
Props G, you buy my disc at a swap meet
or flea market, K*Mart or Target or Zellers
I’m fatter than a portabella”

No matter how white and American he might seem to be on a surface listen, Ricca’s cultural references like Zellers keep him firmly planted on Canadian soil. That’s fine because the local audience he plays to will appreciate the references, while the larger audience he’s aiming for with “Causeways & C-Trains” won’t notice them or won’t mind. That audience is going to be largely rap rock, as the best of his songs are heavy on guitars and drums as opposed to R&B and funk, and again this suits Ricca perfectly. Exceptions include “Raise Ya Glass Up” featuring SoLeo with an echoing spaced out instrumental suitable for Saafir or Ras Kass, “Where You Came From” featuring The EquAzn with a throwback Bomb Squad style backdrop and the understated electronics of “You Can Have It” that sound like a parody of Lonely Island.

Nearing the end of “Causeways & C-Trains,” the title track of the album comes in and sums up Ricca’s style nicely by funking up the guitar backdrop and linking his verses together with solo riffs. “Back in Calgary you must understand/the train’s packed up like a sardine can/with the wonderful, wild and the weird on board/’til the day that I leave and I go on tour.” That’s Ricca Razor for you – wild and a little bit weird but with an album that’s definitely packed tight with entertainment. Not every listener will be down with an album that borders on being Canada’s version of frat rock hip-hop, but for the open-minded rap listener or those who are already a fan of this fusion style, “Causeways & C-Trains” will be right up your alley – or should I say right down your bridge.