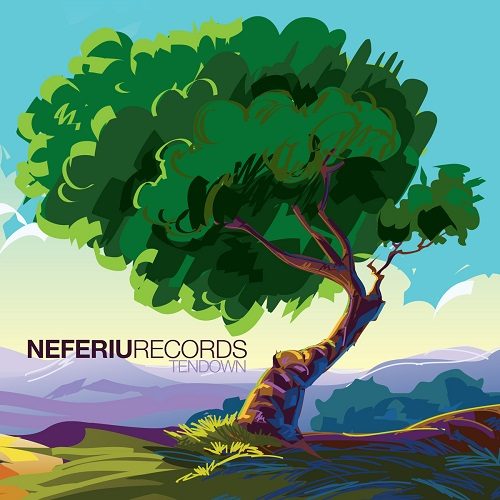 In the recent years Neferiu Records has slowly morphed from obscure DIY Canadian record label I had never heard of… to obscure DIY Canadian record label I had. I keed, I keed. In all seriousness this British Columbia based label has a lot of good things going for it and a ten year track record of releasing albums based more on their artistic merit than their commercial marketability. Some would argue that’s a surefire formula for bankruptcy, and yet the heads at Neferiu have not only carved out a niche, it appears to be a very successful one. On a short list of things the NR collective do right that hundreds of DIY labels that solicit our attention don’t I’d include the following: a slick website that works right and has no broken links, professionally mastered and packaged CD’s with custom artwork (no clip art or pop culture parodies), and most importantly a collective of artists who spend more time making interesting music than whining about how uncreative mainstream rap is and how they don’t have any money. Kudos.

“Tendown” is both the title of their compilation and the start of an unfinished sentence. Perhaps it’s “ten down, ten more years to go.” Perhaps ninety more. Or perhaps it’s a first down – these days people on both sides of the parallel are starting to get football on the brain. Once you get ten down, you have to do it again. You have to keep doing it again until you reach your goal and succeed. What is Neferiu’s goal though? Their mission statement is ambitiously broad: “electronic and hip hop music (with a) tendency towards experimental-ism and the individual musician’s influence.” For me that draws comparison to labels like Bomb Hip-Hop and Ninja Tune, although “Tendown” is a compilation cut from a uniquely Canadian cloth. The gnarly tree sitting on a lonely hill on the album’s cover doesn’t bleed maple syrup, but you definitely can taste it in the aural flavor – there’s no Rice-a-Roni or bangers n’ mash in this sonic smash. Profound Sound may be the closest thing to an underground NY rap artist and his “Fresh Breath” is the opener. It’s not just a metaphor about dopeness – he’s humorously taking people to task who will “never get to first base” because of how awful their mouth must taste. At the end he brings it back to rap though with the words that it’s “hand in hand with bad rapping, they’re one in the same” noting that “permanently stankin herbs definitely need Listerine.”

At just over two minutes long, P.S. is done almost before he’s begun, and the album seamlessly transitions into the Cinister Cee produced “You Know What” by Impirical. While the Slick Rick sample may be predictable, the minimalistic and airy instrumental and gruff lyrical delivery are anything but. There’s never any clear delineation between songs unless you specifically select a track – otherwise the whole hour goes by like one long DJ set at your favorite underground hip-hop watering hole. A majority of these artists are new to me, but occasionally a familiar face like Ricca Razor Sharp wanders into the mix. Despite the smooth overlapping blend, some songs stick out more than others. Lord Marbury sounds like the Canadian version of R.A. the Rugged Man on “Break Master Cee.” Touch & Nato could trade places with K-Otix or Cunninlynguists and be accepted by fans of either on “Reloaded.” Stilz’ “Look Away” reminds me of a K-Murdock anime inspired instrumental. And speaking of anime, Miranda Lee’s “Here” finds her hiding in the folds of an electronic techno beat from Lee and Mantrakid that’s pure Ghost in the Shell.

“Tendown” does take turns down weird paths at times, ones which less adventurous rap fans fed a steady diet of pop radio rap would probably not take. Wyzaker’s “Heel to the Spade” can’t quite decide whether it wants to be a rap song, spoken word poetry or a sing-song story – and I’m fine with the mixture. Others might not be. Sub definitely lives up to his name and title of “Subsonit” – the entire track is one giant subwoofer adventure that changes pace and direction at his discretion. Mantrakid might be better served as producer than rapper. I understand the creative choice to whisper his entire rap on “I Really Should Call My Dad,” but he’s even harder to understand than LL was on “Phenomenon.” With due respect to the label there are times that “Tendown” is just too eclectic for me, although taken as a whole (as it’s probably meant to be) I can get through it all. It’s probably slightly unfair to say this is a whiter shade of pale than most hip-hop label compilations, but as I noted when reviewing Razor Sharp’s last CD it’s also to their credit that they don’t apologize for it even when it’s noticeable. I have the utmost respect for their artistic integrity, though at the day’s end I find “Tendown” is more of a sampler for me than a whole CD. It’s packaged to stand alone but ultimately will make you want to hear from specific people on it more.