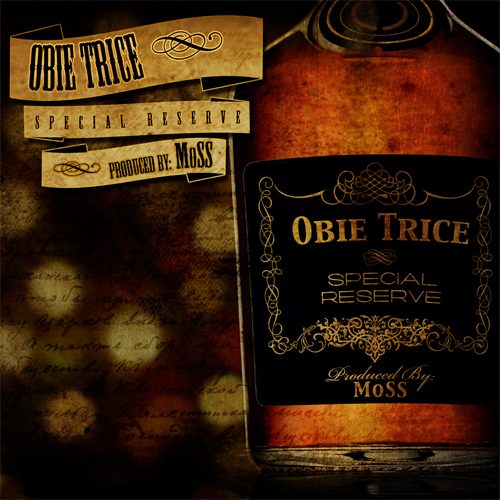 On a rainy summer night back in 2006 there were six twenty-something year olds sitting around a small, circular kitchen table playing Texas Hold ‘Em while passing around a bottle of Jose Cuervo. I don’t remember that night all that well. From what I’ve been told not only did I lose about thirty dollars and everything I had eaten in the twelve hours previous to the gathering, I also blacked out in the middle of the street on my way home. However, one thing I remember from that night in sufficient enough detail to talk about it was during the intermission from our poker game, we turned the television on and got to see a quick glance of Obie Trice and Akon on CSI: Miami, performing “Snitch” from Obie’s sophomore release “Second Round’s On Me.” I proclaimed: “oh shit! That’s Obie Trice!”, but my enthusiasm was not quite understood. Four of us six members of the game had no clue who Obie Trice was. So I, and my one friend who already was an Obie Trice fan brought everyone up to speed by spinning his debut album “Cheers” for the rest of the night. As the summer progressed Obie’s August 2006 release ‘Second Rounds On Me’ became the default album to place in the head unit whenever we went out clubbing or to the bars.

Less than two years later Obie Trice divorced himself from Shady Records, and it would be more than three years before he would release his third album “Special Reserve” which wears the tagline “Produced by: MoSS” on the album cover. MoSS has some SERIOUS skills, why else would he be a member of DJ Premier’s Works of Mart? From what I understand this album was almost entirely written and recorded between 1997 and 2000, and it will serve as the preface to his tentative next album “Bottom’s Up.” An album comprised of entirely of never before released music being made available for purchase years after the original recording process can be either a wonderful or terrible thing. Nas did it right on “The Lost Tapes,” Canibus did it wayyyy wrong on “Mind Control” and I have yet to make it through an entire posthumous Tupac album post “Better Dayz” without being revolted. So is “Special Reserve” a special release?

The opening track “Welcome” could’ve been done without. The same definitely cannot be said for the snapping “Got Hungry” though, because Obie Trice beats the mic up something fierce. On the militant “You’ve Been Slain” that follows, Obie Trice more or less explains the process of death as a result of homicide to a victim who “caught a couple”. Nothing mind blowing, but the beat does not degrade with repeated listens and at only 2:02 long the song is neither too short, or too long. The two best songs on ‘Special Reserve’ follow, the first of which being “On and On”. THIS is a hot track. In my opinion the hottest beat on the album and Obie’s gritty approach to the track compliments the beat beautifully. If you listen to this album in it’s entirety you should get a sense of consistency, and theme in “Special Reserve.” So how’s Obie Trice spit game, considering it’s impossible to determine exactly how old the lyrics are? Well, on “I Am” Obie tells you how he thinks he sounds:

“Obie Trice, the big lipped, slim nigga
I got the antidote that’ll heat the fuckin’ winter
I’m too nice for emcees to wanna fight with this
I’m more like Christ when I recite my shit
So come and Meet Joe Black
’cause I’m the voice that you hear
when you’re havin’ a heart attack and I appear
Obie Trice the ill nigga, Hilfiger
…
I’m like Iron Mike when that nigga first appeared
I’m like Michael Jordan at the prime in his career
I’m like Nasty Nas down memory lane
Sittin in the park after dark slingin’ my ‘cane
I’m Obie Trice”

Yo. The following three tracks “Roughnecks”, “4 Stories”, and “Cool Cats” keep the album rolling at a cool 55 MPH (comfortable but still going somewhere). Although they don’t do much to improve on the songs before them, they don’t fall short of them either. “What You Want” is my third favorite track just because the beat sounds like it was pulled from Stephen King’s “It”. It’s hypnotic, unsettling, and Obie Trice’s snotty delivery coupled with the unorthodox chorus make for a pretty interesting song. The traditional Obie Trice humor comes through in spades on “Jack My Dick”, and he closes the album out strongly on “Dope, Jobs, Homeless”. With only ten full length songs he does sustain your interest in the album, you do appreciate the lyricism and you probably can listen through it in it’s entirety a few times before the album loses some steam. What he may lack in terms of multi-syllabic, bravado lyricism, he compensates for them in personality, persona, and entertainment value. While this album is consistent in a good way, it is also a bit too consistent in another. If you are not into gritty, surreal beats and the type of lyrics you usually hear on those songs, this album may either be downright depressing or simply uninteresting. If you prefer Obie Trice’s singles over the majority of his other songs this album may not be for you. However, I enjoyed this album and I feel it to be a worthy addiction to his discography. Whether “Special Reserve” is an acquired taste to the average Obie Trice fan is up to your palate.