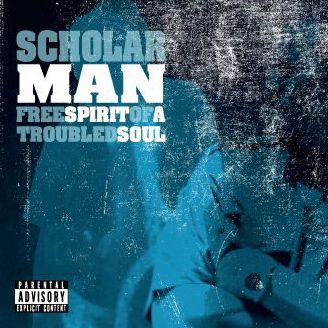 Although he is known for socially consious and soulful music, Maryland-based artist and producer, ScholarMan, refuses to be boxed in a specific sub-genre of hip-hop. His message and lyrical style have conjured up comparison to the likes of Common, Masta Ace and Chuck D, while his production has been compared to that of Hi-Tek, DJ Premier and the late J Dilla. Pretty good company there, but instead of resting his hat on those laurels, ScholarMan is intent on getting better. Considering himself a student of hip-hop and an advocate of the culture, this emcee shares his beliefs and views through his music. After several local releases, his first international album, “Candy Medicine”, was released in 2007. Due to the response by the fans of that release, SM now religiously drops an album annually. In 2008, he released “Soul Purpose” and 2009 saw “GameShift: The Movement”. This time around the Soganic Music revolutionary is exploring the “Free Spirit of a Troubled Soul.”

The album kicks off with the introductory “Just Me”, which essentially takes the story of who ScholarMan is and where he comes from and truncates it down to three minutes and thirty-seven seconds. He flows effortlessly over the beat, and the cuts do in fact remind me of the aforementioned Premier. He does seem to have a slight obsession with the 2007 movie, “Superbad”, as he references it in the album’s first two songs. K-Mynez makes an appearance on the call and response anthem that is “I Love Hip Hop Music”. Both “Set Above” and “Reap, Sow” feature strong production and the latter showcases more well placed cuts.

Scholar flips the script on “Babydoll”, at least lyrically, as we find him courting a lucky young lady. The track features a Curtis Mayfield sample from his song of the same name. The tempo picks up a bit on “Hold Me Back”. This is followed by one of the album’s standout tracks, “Hood Stories Vol. 4”. I would assume that there were previous “Hood Stories” installments on his previous releases, but this time around, Scholar tells a story similar to the 1995 film, “Dead Presidents”. The song actually starts off with a clip of dialogue from the movie before going in-depth about the despair of a disillusioned war veteran, as he raps:

“Fresh off the plane, he’s hopin’ to get some sanity
His country tricked him, said he fought for humanity
Like you can guess, he got post-traumatic stress
Hard for him to breathe, lost a lung through his chest
Plus he drinks now, slowly, killin’ his liver
Bad dreams, just to wake up to a shiver
His daughter scared of him, and his shorty’s worried
Can he maintain with the strife that he carries
Before he left, he was far from a mess
Church every week, that’s his fam, they got the best
Now he can hardly hold a job cause he’s Kirkin out
Seein’ things, weird words that he’s blurtin’ out
So that means bills are stacked, then they stack more
He wishes he was dead, what he come back for
All he think ’bout is ‘Damn, I’m a veteran
Iraq..two tours, I deserve better than
Uncle Sam owes me, I’m gon’ take it
Guarantee I’m gon’ make it, rob this muthafucka naked'”

The album starts to wind down with “Hopes & Dreams” and “Love Potion”. The closer, “Remember When” features the vocals of Teisha Marie. Bearing a vocal resemblance to Chrisette Michelle, she provides the perfect compliment to Scholar’s flows about lost and would’ve-been loves. Overall, I think that ScholarMan does well enough to avoid being aimlessly tossed into any particular sub-genre. Being that he does his own production, he has the ability to craft and rock beats that best suit his style of rhyming. It’s not difficult to tell that he’s studied hard, and it probably won’t be too much longer before he’s getting A’s across the board.