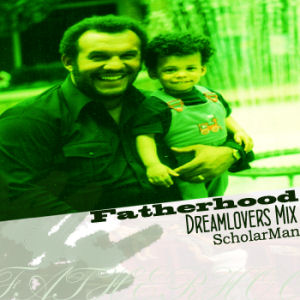 Since this review comes ten days after the EP’s intended release date, I’m going to take the unusual step of including a paragraph from the press release that accompanied it on June 19th:

“We present you with something fresh to ride to this weekend. Check out the ‘Fatherhood Dreamlovers Mix’ EP by ScholarMan. On this project, ScholarMan pays tribute to dedicated fathers by presenting a handful of tracks that are fatherhood inspired. With samples borrowed from The Dreamlovers, this EP features artists Anonamas and Silent War.”

Belatedly we offer this brief review in recognition of this brief EP, given away free by ScholarMan for Father’s Day 2010 in recognition of fatherhood everywhere. This one plays more to ScholarMan’s strengths as a producer than as a rapper, and in fact the longest song “Heartbeat” features no vocal performances at all other than in the form of samples. Still this suits the theme of the EP well as it’s entirely possible your father (certainly mine) just isn’t that into hip-hop, but might feel a good beat you could cruise to. Speaking of samples on “Heartbeat” though, they’re all about what it means to BE a father, from a variety of different voices of different backgrounds, all talking about fatherhood from their own perspective.

As for the songs that two have featured performances, there are only two – “In His Image” with Anonamas and “Seed” with Silent War. The former is more of a spoken word performance a la Ursula Rucker, while the latter is the same but from the male side of things – think Saul Williams. Either way all of the songs on this EP are held together by two things – ScholarMan’s solid but subtle production and a love for strong male role models who shaped and molded yesterday’s generation for today and will do the same with today’s generation for tomorrow. It’s a noble effort offered freely and enjoyed in the same manner.