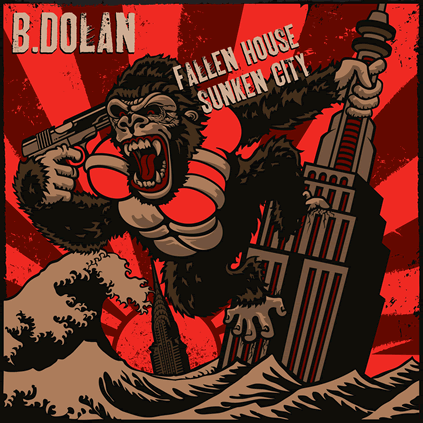 B. Dolan’s Alias-produced “Fallen House, Sunken City” is a difficult album. Within the wonderful world of hip-hop criticism, this characterization is not necessarily an insult, and, coming from someonone as snobbish as myself, it is likely a compliment. I would describe some of my favorite rap albums as difficult. Saul Williams’ self-titled is “difficult” because it is intellectually challenging. Clipse’s “We Got It 4 Cheap, Vol. II” mixtape is â€œdifficultâ€ in its disturbing amorality. El-P’s “Fantastic Damages” is a â€œdifficultâ€ listen because of its innovative, dissonant, and dense production style. Indeed, to call an album “difficult” is often to label that album “iconoclastic,” “emotive,” or “critical.” But when I call “Fallen House” “difficult,â€ I mean, first and foremost, that it is exhausting.

This is not to say that Dolan lacks potential. His voice — gritty, intense, and bassy — enables him to truly murder a track, as he did in all of his guest verses on Sage Francis’ 2009 mixtape, “Sick of Wasting . . .” When he properly utilizes this natural gift, like on â€œFH,SCâ€™sâ€ opener “Leaving New York,” he rides the beat with an engaging sense of imminence.

He also has some gifts as a wordsmith (“We need more medicine/less cough suppressant/Settled on a coffin fetish in worship of solid objects/It’s good to be hard/But it’s hard to be honest”). He can tell a coherent story, such as that featured in the stellar “Body of Work,” the LP’s standout track. And he is certainly invested in his work, intellectually and emotionally. I’ve seen clips of B.D. live, and his intensity is contagious.

These virtues, however, fail to translate into a solid record. While his gritty delivery can captivate, Dolan’s failure to vary his tone renders his constant intensity draining. I quickly grew tired of B.’s indigence, his guttural ramblings sounding more and more like angry barks. A large part of the problem is that, if an MC is going to present his thoughts in such a serious tone, he better be dropping some profound-ass knowledge.

To be sure our Strange Famer tackles nothing but serious subjects, but, all too often, he sounds less legitimately concerned and more mentally ill. On “The Reptillan Agenda,” for example, amidst a generally anti-status quo polemic, he screams ferociously against lipstick and Listerine; not sure why, with all of the world’s problems, he thought mouthwash deserved a mention. He then elaborates on a conspiracy theory which, I think, involves China destroying New Orleans. Tough to say.

On the next track, “The Hunter,” he growls cryptically that “I am a vampire hunter, a bounty killer . . . .” I think “vampires” are supposed to be a metaphor for something, using them perhaps as Atmosphere does in its anti-police allegory, “Vampires” of off â€œGod Loves Ugly,â€ but Dolan never reveals the referent of his metaphor and just ends up sounding nuts. The problem though, all in all, is not that the individual songs are terrible, but that Dolan’s unrelenting heavy-handedness grows tiresome quickly, and B.D. never thinks to let his audience rest.

Alias’ production adds to the problem. To his credit, Alias, most famously associated with the Anticon collective, certainly diverges from the mainstream. Divergence, however, is not itself a virtue unless its heading off to somewhere worthwhile. There are certainly some quality moments. The glitchy video-game hook on “Economy of Words (Bail Me Out)” finds a good balance between industrial-influenced electronica and hook-driven boom-bap. The Latin-horns backing the call-and-response chorus on “Border Crossing” are brilliantly macabre. On “Body of Work,” with a minor piano melody under heavy distortion, he finds the intersection of beauty and sadness the record is constantly grasping at but rarely achieving.

Overall, however, Alias’s production merely compounds the record’s dense and oppressive aesthetic. The tracks tend to bleed into each other musically, one grainy backing indistinguishable from the next. Like the vocals, the music provides the listener with little room to breathe or enjoy. The production feels like intensity for intensity’s sake, without conveying the love-of-the-art so obvious in the work of Alias’s presumed influences, like Jel, El-P, and Portishead.

Indeed, “Fallen House, Sunken City,” is what you get when you take a gifted MC and a gifted producer both of whom take themselves much too seriously. Instead of setting out to make a well-rounded album, B. Dolan and Alias set out to make a difficult one, and that’s exactly what they achieved.