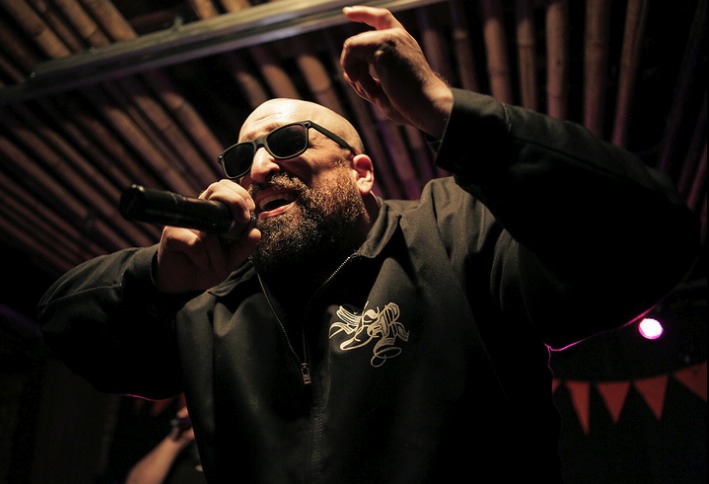 Great hip-hop artists can be incredibly multifaceted individuals. In fact, they have to be.

B. Dolan released his latest album, Kill the Wolf

, this summer, and it features a host of musical influences.

When most hip-hop artists discuss their influences, it ends up the usual gang of suspects; emcees, and soul artists, whose names come up so frequently it becomes an exercise in repetitiveness. With that in mind, RapReviews sat down with B. Dolan to dig a little deeper, asking him whose music he’s been influenced by that falls outside the box of what we might expect.

Below are five artists that B. Dolan counts as being a part of his musical roots, along with stories of how each has influenced him, and the latest from the man himself.

“When I was old enough to hitch a ride with friends to the local mall, and later when I started driving there, the music, and book, stores there were my first real window to the larger world. The two styles of music I immediately began buying were rap, and blues music. Rap, because I’d heard a Scarface tape from an older cousin. Blues, because … I have no fucking idea why. A friend in elementary school had showed me his dad’s Led Zeppelin records, and all I can figure is I somehow figured out ‘I like this because it’s blues music.’

Anyway, the first blues musician I really fell in love with was John Lee Hooker, and he’s remained a constant source of inspiration. JLH, as well as Muddy Waters, Howlin’ Wolf, and a few others, are never far from my personal rotation.”

“Tracing the roots of blues music even further back, I found out about this guy. When I was living in New York I heard a record Toumani made with Taj Mahal, called Kulanjan, at a Virgin Records listening station. That album might be my ‘desert island’ record, particularly their version of ‘Catfish Blues.’ I’ve been in awe of Toumani Diabete ever since, and was extremely jealous when Bjork later worked with him. I’m still holding on to the hope that our paths will cross one of these days.”

“When I dropped out of school, and started pursuing my career full time, I was living with a Rasta named Kaya Sorhaindo, who put me on to Sizzla. At the time I was first stepping on stages, and figuring out how I wanted my music to sound, I was inspired by how amazing Sizzla’s range was. From a song like ‘No Pain in Jah Love,’ to his style on ‘Pump Up Her Pum Pum,’ you wouldn’t even know it was the same artist you were hearing. The intensity he spit with also really inspired me. Sizzla comes from that Rasta tradition of sounding like a goddamn lion when you speak. I learned from that.

Also, I once heard Tony Matterhorn play a dub Sizzla made of ‘Dem a Wonder’ over Nas’ ‘Hate Me Now’ instrumental that was the most incredible thing ever made. I’ve never found a full version of it, but if one exists I’d give my left arm to hear that record in it’s entirety. Just putting that out there.” (Editor’s note: If you have the full version, please don’t make B. Dolan give up his entire left arm to hear it)

“When I was a very little kid, like three or four (years old), my grandmother would put me on her kitchen table with a spoon in my hand, pretending it was a mic. Apparently I was really into singing Billy Joel songs. ‘For the Longest Time,’ ‘Uptown Girl,’ and ‘Keeping the Faith,’ were some favorites. I still ride for Billy Joel. I’ve read some articles where he’s apparently very down on himself, but chin the fuck up, Billy Joel, these cats can never fuck with your sword, your pen, your darts.”

“Another joint I played constantly while living in NYC, and have revisited at least once a year for over a decade, is this guy’s song ‘Hasty Boom Alert.’ What’s incredible is that I still cannot conceive of how much fucking work went into that song, or how certain things were done on it. Long before cats like Flying Lotus, dudes like μ-Ziq, Squarepusher, and Aphex Twin were pioneering that complex jazzy wonky electronica shit. The ambitious approach of that kind of production definitely inspired me back in the day.”

All of those influences, and more, come together on B. Dolan’s recent release, Kill the Wolf

. The latest single off of the album is “Safety Theater,” the video for which features children in the role of TSA agents, as B. Dolan questions some of the extreme safety precautions people take, and the unspoken meaning behind many of those precautions.

The sound, and the message, are indicative of an album that ranks as one of the year’s best.