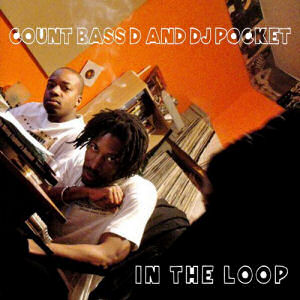 Count Bass D and DJ Pocket’s motto for twenty-ten is “activity,” and “In the Pocket” is the first product of this motto. It’s also my first encounter with the underground legend Count Bass D, a deficiency I was in need of correcting for some time. His previous releases have all earned high marks from other RapReviewers, and I’ve been meaning to check out  his work for a minute.

This album is a collab between the Count and his friend DJ Pocket, a DJ who is expanding into MCing. I’m basing my review on a download, so I’m not sure if the Count or DJ Pocket are handling production, or if they trade off, Jaylib style. They trade off on the mic, or at least I think they do: they sound so similar that it’s hard to tell them apart. Count Bass D’s voice is a little deeper, and his rhymes are more out there, but it’s easy to get them mixed up. As unpromising as the “producer-turnt-rapper” tag can be, both hold their own on the mic. Count Bass D has already proven himself as a rapper during his decade-plus career, and DJ Pocket shows that turning the knobs is not his only talent. Their style on the mic and the boards is laid back almost to a fault. They spit out rhymes in a steady, deliberate monotone, never rushing things or getting too excited. It’s the same with the production; most of the tracks are midtempo, built around 80s R&B, and not trying too hard to be banging.

The production reminded me of DOOM, in both a positive and negative way. I love how DOOM can flip an offbeat AM radio sample, and Count Bass D and DJ Pocket do the same thing here, taking cheesy 80s R&B and turning it into hip hop gold. However, DOOM never seems to exactly stretch himself musically, and the Count and Pocket aren’t reaching on “In the Loop,” either. It sounds like they found some dusty 80s album, put a drumbeat behind it and called it done. It’s all part of their “activity” motto, which seems to imply that “good enough” is good enough. There’s a low key charm to the beats, but they are also a little underwhelming.

Their other motto, “C.O.D.” or “Cash On Delivery,” is repeated over and over again during the course of the album. They even bring some Biggie samples to back up their claims. Their point is that if you want them to perform for you or spit a verse for you or produce a track for you, you better pay them up front. They’ve both been in the business long enough to know that promises and good intentions don’t pay the bills, and they’ve developed a more proactive payment structure for their artistic endeavors. That’s fair enough, but they didn’t need to say it seven hundred times during their album. Once or twice would have gotten the point across.

“In the Loop” has a quirky, mellow vibe. The Count’s skills as an MC are unassailable, DJ Pocket keeps up, and the vibe is right throughout the album. On the downside, it feels tossed-off, more the product of two friends playing around in the studio than a thoroughly planned out and executed artistic statement. Given that the mantra of most rappers these days seems to be quantity over quality, Pocket and the Count are probably going in the right direction, career-wise at least. At any rate, it’s not the only Count Bass D product that will be available in 2010. He’s got a solo record on deck, as well as some other projects in the works, and DJ Pocket has an album with guest rapper H20 coming out soon. In the meantime, “In the Loop” is a pleasant diversion, sixteen tracks of underground hip hop that is solid if not awe-inspiring.