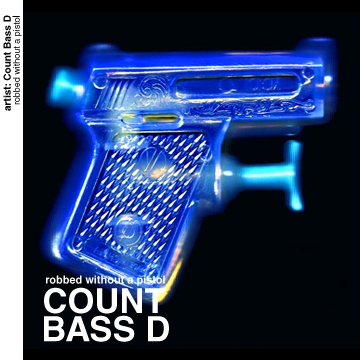 I remember when Dwight Farrell first served me a sandwich. Actually, it was a whole GANG of “Sandwiches.” He swore they were the best in creation – so good they could turn anyone out. I was skeptical at first. The ingredients seemed a little weird. D was from Nashville, his erstwhile label owners were Pete Nice and Bobbito the Barber up in New York, and his album was conceptually a “Pre-Life Crisis.” To this day I’m not entirely sure how you can have a crisis before you’re even born, but once I stopped analyzing the ingredients and took a bite I found that D’s music was incredibly tasty. Before long I was right in D’s groove, feeling his beats and rhymes, wondering if “T-Boz Tried to Talk to Me” too.

That was 1995. D must at times wonder where the time went in the last 13 years, even though Count Bass D has always been popular in the hardcore hip-hop scene. Albums like 2002’s “Dwight Spitz” and 2006’s “Act Your Waist Size” cemented his legacy as an underground rapper and producer who always served up tasty treats, yet the mainstream has never quite gotten the flavor down. Persistence and tenacity are to D’s advantage though, as he keeps on working hard and grinding away at getting ahead day by day. Taking another chance at reaching a wider audience, D has released an entire 30 minute instrumental album titled “Robbed Without a Pistol” FOR FREE through his own website. Even someone who doesn’t think they’ll like the taste of D’s “Sandwiches” can hardly refuse an offer like that.

It’s fair to say though that Dwight gave these songs a very strong and pungent flavor. RR writer Andrew Matson once likened D’s production style to J Dilla. Listening to the opening track “No More Arguing” I’d go one step further – he’s J DILLA REINCARNATED. It’s not just that the song is an instrumental less than 90 seconds long. It’s not just that D seems to be a fan of airy, organic keyboards that breathe in and out over beats. It’s not just that D takes breakdowns at unusual times or fades samples in and out only to jump back to them when you least expect it. It’sALL OF THESE THINGS. It’s that very left-of-center production style that made J Dilla so revered by a certain section of hip-hop fans, and so overlooked by a group that only wanted big booming beats and trunk thumpers. D’s production style on “Robbed Without a Pistol” follows so closely in Jay Dee’s footsteps you can’t help but think the title may somehow reference him. We were certainly robbed when illness and disease took Dilla’s life at a time when he was hitting his musical and creative peak, no gun required.

For those willing to go on a creative journey through beats and life sans rhymes, “Robbed Without a Pistol” has plenty of great flavors to savor. “Get Busy” has a fat bottom beat and soulful guitars that wail. “You’re Better Than All the Rest” could easily be a 1980’s crossover R&B song, from the whistling melody to the soulful saxophone stabs. At 2:32 it’s STILL over too soon, and it’s one of the longer songs found here. “Hurry” lives up to the title, a pulse-quickening track focused almost entirely on the frantic drumbeat. “I’m Still Paranoid” is one of those really pungent flavors, a combination of boom bap beatboxing and oddly syncopated samples with instruments that never really come into focus over the odd melody strong beat. All of the elements are wrong individually, yet in D’s hands they work together perfectly. That’s often the case on “Robbed Without a Pistol,” from short tracks like “All Shook Up” that reinvent Mobb Deep in a way their fans would never expect to longer dusty funk joints like “Down to Get It.” You really can’t go wrong with any album from Count Bass D, and one given away entirely for free it’s twice as nice, but first time listeners may still find his beats an acquired taste. Just like he said 13 years ago though, once you try his sandwiches, I’ve got a feeling you’ll get turned out without a doubt.