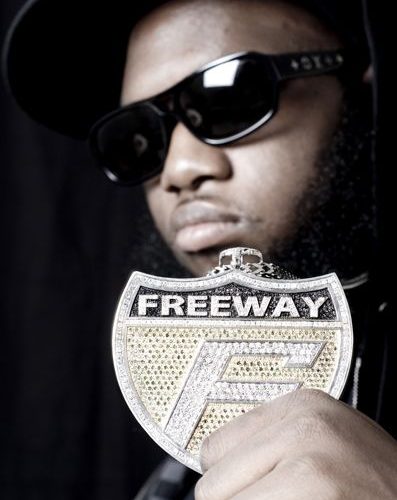 Not a lot of artists could make the jump from the world of mainstream hip-hop to one of the most respected homes of indie scene, but that’s exactly what Freeway did when he went from Rocafella Records to Rhymesayers. Freeway’s always been a thoroughly respected emcee, which is why it wasn’t too much of a shock to hear his name associated with the label that’s home to Atmosphere, P.O.S. and Brother Ali. Heck, were it not for the fact that he isn’t from Minnesota it would seem downright natural to hear him shout out Rhymesayers in his trademark gravelly growl.

, has the hip-hop world in a frenzy and this week RapReviews caught up with him to find out a little bit more about the project. During our conversation Freeway also opened up about some of the other things he’s been working on, what he feels the public’s perception of him is, and why he’s still good with Kanye West.

Adam Bernard: Your new album with Jake One, The Stimulus Package

, is getting rave reviews. Actually, most of your work gets rave reviews. Do you feel the public perception of Freeway matches the critical one?
Freeway: I’m not sure. I don’t think it does. That’s why I’m working so hard, so I can bring it to the forefront and people can see that. It might just take a minute to drill em in they head.

AB: From Just Blaze, to Kanye West, to Jake One, you get to rhyme over some killer tracks. Why do you think it is that so many great producers like working with you?
FW: Probably cuz I’m different and I’m willing to work. I’m open minded, I’m easy to work with, and I respect people. I’m not one of them stuck up ass niggas that think I’m the shit that you hear in the club. I’m pretty level headed and I’m willing to work and I bring something to the table.

AB: You said you feel you’re different. Why do you feel you’re different?
FW: Because don’t nobody rap like me. {laughs} Actually it’s not nothin special that I do, it’s just the way that it comes out. Since I was young and I was beginning rapping I had always felt as though I had a different flow and a different style from everybody and it came to fruition. Some people love it, some people can’t stand it.

AB: Obviously a lot of people love it since you’re among the last group of artists who’ve had some real staying power. Why is it that so many of the new artists don’t stick around? What do you think they’re doing wrong and what can they do to have a little longevity?
FW: I think they should concentrate on the music more. I’m a fan of hip-hop and I like to buy albums that I can feel, that I can pop in, listen to, and see what the artist was thinkin when they were doing it. Nowadays it’s just a lot of party songs and dance songs and stuff like that. There ain’t nothin wrong that, people need to party and dance, but I think when it comes to an album, people want to hear an album that they can rock out to, like when BIG was doing his albums. You could pop em in and listen all the way through and everything coincides.

AB: Your first album, Philadelphia Freeway, was around 75% Just Blaze beats, and your latest is 100% Jake One beats. You’ve released a few projects in-between, but what do you feel is gained when you work with one producer, or mostly one producer, for an album?
FW: I just think the chemistry is there. With me and Jake we got a good chemistry and the same thing with me and Just. When you got a chemistry it’s just good, everything comes together perfect. The songs were coming out beautiful and they just feel good.

AB: Did it take time to develop that chemistry?
FW: Actually he just was sending me folders of beats and I was knockin songs out and sendin em back. For the most part everything was coming out crazy, so we came up with the concept of us doing an album together and took it from there.

AB: Speaking of songs, you released a song titled “Freeway’s Beard” last year that I thought was absolutely brilliant. Where did you come up with the concept?
FW: Eminem did a freestyle on Tim Westwood and he was like “I disappeared, I was hiding in Freeway’s beard,” so me being the marketing genius that I am I’m like I’ma grab that. I got my in-house producer, Phoe Notes, to make that joint a hook and put a beat behind it and I just went in and it came out crazy. People loved it. It sparked the mixtape that I just dropped like a week before the album that’s called The Freelapse. It’s me over a bunch of Eminem beats and it’s hosted by DJ Wonder.

AB: Another project you recently released is the Best of Both Beards mixtape with Jakk Frost. Tell me a little bit about that collaboration.
FW: Me and Jakk Frost have worked together for years. He’s a close friend of mine. He was signed to Sony when I was on Rocafella. The Best of Both Beards is a CD that we put together with songs that we had from ’97 all the way till now, and we got another joint coming called Free Money: Defense, Offense. That should be coming real soon.

AB: You mentioned Rocafella. The Roc kind of fell apart when Jay went on to his temporary stint as Def Jam prez. What happened to you and the other Rocafella artists when that transition was going on? How come it took a while before we heard from you again?
FW: Cuz of the business side of things. It was confusion. Everybody was confused. We didn’t really know what was going on until the last minute, but if a machine is runnin and then the head of the machine shuts down then naturally the machine is gonna shut down.

AB: How did you deal with that situation?
FW: Man, at first, you know, it was crazy. Naturally, if you’re accustomed to having something one way you’re used to it, so I was like damn, how am I gonna overcome this, no more Rocafella? Me and Jay are still good, but it ain’t like how it was. I can’t call on him for every little thing. But I basically just shook it. I stood on my own two and was like it’s time for me to let the people see I can do it on my own, and that’s when I really started goin in and droppin joints. That’s when I did My Return, that’s when I did 32 songs in 31 days, and ain’t been no lookin back ever since.

AB: What are some of the key differences between your first album and what you’re doing right now in terms of the way you work and the music you’re releasing?
FW: This album is more like my first album to me as far as the comfort level, and I just felt like going into the album, I felt free, like I was doing me, I didn’t have no interruptions or no nothing. When I did the first album I felt as though Rocafella and Def Jam really cared about the project and with this album I feel as though Rhymesayers really cares about the project and they’re behind it. When I did Free At Last that’s when all that BS was going on, so naturally it was like I didn’t really have the support of the building and all that. But as far as the difference between a major and an independent, it’s just more hands on. I feel as though they got more love for the project and I feel as though you get out of it what you put into it, so it makes me want to work hard and get a good result.

AB: You had a one album deal with Rhymesayers, but do you feel there’s a future for you there?
FW: We’ve definitely talked of us moving on in the future.

AB: Have you had a chance to collaborate with any of their other artists?
FW: Yeah, me and Brother Ali are real good friends. We’re about to work on a project together. Atmosphere is cool. We did a couple joints. We did Soundset (the Soundset Music Festival) together, so I got to meet a lot of their artists. We definitely want to do some collaborations in the future.

AB: You’d be a rarity, a non-Minnesota artist on the label.
FW: I know, that’s crazy, but I like breaking the mold, I like doing things that people don’t expect.

AB: Keeping with the theme of collaborations, I want to ask a quick question about someone else you’ve worked with – Kanye West. When you see some of his antics outside of music do you laugh them off and say “that’s ‘Ye,” or do you shake your head and say “damnit ‘Ye, again!?!”
FW: I just laugh it off like “that’s ‘Ye.” He conquered a lot of adversity. When we were at the label and he was trying to do his rap thing wasn’t nobody trying to hear it. I think Dame was the one who listened. I don’t discriminate, I was on his first album. When he was putting that shit together and ain’t nobody care about that shit I jumped on that joint. We’re good.

AB: Finally, and you can be completely honest with me, other than religious reasons, why is having a beard awesome?
FW: Because it’s manly! And it’s different. It has a lot of significance, religion is first and foremost. When I was first trying to get on, I was like “damn, I got a beard. Ain’t no rappers out with beards. This is gonna be crazy.” I was thinking it might be hard because I had a beard, but people adjusted. Just like with my voice, people were saying “I don’t know if you’re gonna be able to do a whole album cuz of your voice, people can’t listen to a whole album with your voice,” and they loved it.