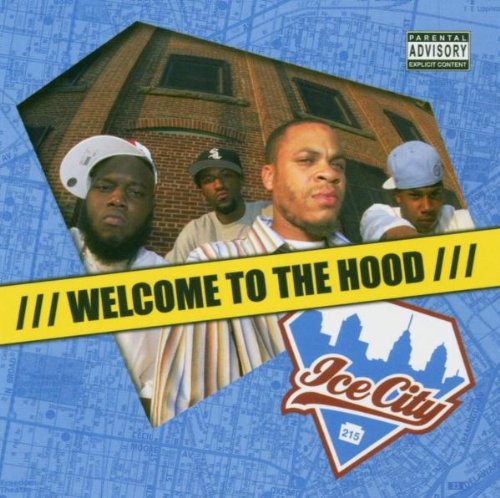 While most are familiar with the Bible’s 10 Commandments, there is an elusive, lesser known 11th commandment snuggled in the back of every would-be rapper’s cerebellum: “When thou blowest up, thou shalt go back and put your “mans-and-’em” on next, so sayeth the Lord.” Like a page out the Book of Roc-A-Fella: Jay-Z begot Beanie Sigel, who in turn begot Freeway, and now the heavily bearded one presents us with his very own Philadelphia posse, Ice City. Named after their neighborhood stomping grounds in north Philly, Ice City is Face Money, Bars, Hydro and Freeway himself. “Welcome to the Hood” is their debut album. Sure Shot Recordings is the label. But enough with the formalities, let’s get to the music, shall we?

Ice City’s lead single “Lock it Down” explodes with a barrage of hi-hats, a spicy Salsa-like rhythm, and a thumping bass that’ll have car-speakers rattling uncontrollably. Obviously the album’s intended party track, the lyrics are pretty straightforward (“We came to lock this shit down, pop a few rounds, spark up an ounce / If you didn’t come to party? Then bounce”), but it’s the infectious percussions that will catch listeners’ attention.

The summer smooth “They Ain’t Ride’n” is a ballad of viola strings and gritty bass loop reminiscent to a long-forgotten Alchemist concoction. While the song’s theme is pretty basic â€“ Ice City is riding and everyone else is not, apparently â€“ there are a few violent highlights courtesy of a gruff-voiced Hydro:

“Muh’fuckers biting my back out
But when it’s on, they the same dudes who back out …
Yeah, I’m the kid they ask ’bout
Your album? I housed yours, you put trash out
You don’t want me to snap out and spaz out
Smack you with the Gat till you pass out
I’ll smack you with a bat till you black out
Fuck shots, I throw a rock through your glasshouse”

Now on to the album’s likely candidate for illest track: “Ride Up.” A nostalgic Joe Budden stops by and recalls his grinding heydays (“I remember me as a young-buck tryna put work in / Same pants for two weeks but I would iron the dirt in, it’s real”). Yeah, yeah, whatever. Not to dismiss Mr. Budden, but the song’s main attraction clearly lies in its instrumental backdrop â€“ so much so that Joe could’ve rhymed about lilies and daffodils, and it would still come across ill. Sounding like a live nightclub band rather than a beatmaker’s studio equipment, “Ride Up” is packed with electric guitar riffs, funk-induced bridges, and a booming bass line that tops it all off. Truly a must-hear, and I rarely ever use that phrase.

Recently released Peedi Crack comes out just in time to drop a verse on the rowdy “I’ll Take Ya Lady,” while fellow Roc affiliate Oschino makes a flippant cameo on “Philly Niggas” (“Still selling crack to keep my kids with groceries / I don’t gotta take pussy, nigga I’m not Kobe”).

Now while he appears on only a handful of tracks, Freeway is clearly the shining star of the Philly quartet, unintentionally outshining his rhyming counterparts in every instance. Take “I Want You Back,” for example, the album’s lovey-dovey track equipped with everything from a hi-speed vocal sample to a female crooner on the hook. While the others drop tolerable verses about the finer sex, Free spits with the hunger of a new-jack â€“ weaving in-and-out of the 4-bar standard and rhyming words on his own terms:

“Second album: more money, more problems
Miss, I admit I still stroll the strip, I know you sick of me wilding …
And them haters can’t stand it ’cause you branded in
Louis Vuitton, Roc-A-Wear, and Donna Karen
And when I’m on tour, you ain’t there but you’re on my mi-i-i-ind, sister
I’m on my grind, like the 5’s brought the squad with me
Because I know you got like four sisters
We be moving like the movers move, have it like the havers have it
Tell your girls that I’m with ‘cha”

Essentially, Ice City prove to be only as good as their instrumental backing. While they pack a wallop on hyper tracks (“Lock it Down” and “I’ll Take Ya Lady”), conversely they aren’t as entertaining without an amped beat behind them (“The Hood Is Crazy” and “Da Boyz”). While toting guns, peddling white powder, and chasing after the American Dream are common themes in rap music, what clearly sets apart the best from the rest is not necessarily what you say, but how you say it. With that said, although full of charisma, Ice City aren’t saying anything new.