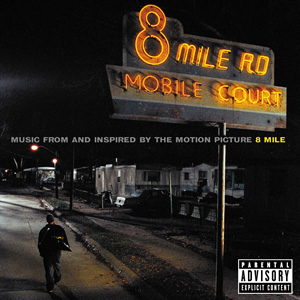 “All roads lead to Rome.” A historically well known saying of ancient times that was both simple and profound. It didn’t just literally mean that every road constructed lead in and out of Rome, it implied that the point of having roads WAS to get to Rome. Where else would you go? What possible reason could you have to go anywhere else?

It’s no small coincidence that Detroit is known by the nickname “Motor City,” nor that Eastern Michigan has some of the highest per capita of automotive vehicles on the planet. Just as in ancient times, the names of the roads leading to Rome was not so important as the fact that they WENT THERE. So why, in the planning of major thoroughfares that lead in and out of a Motor City, would you even bother to give them names? Better instead to simply name them by how long they are, since as long as they get you to Rome/Detroit it really doesn’t matter. For people who grew up in the suburbs and ghettoes in and around Motor City, these nameless roads became more than their name. They became symbols of turf wars, of lines you do and don’t cross, and in some cases of the long journey ahead to rise from misery and poverty to fame and fortune.

For Marshall Mathers, b/k/a Eminem, “8 Mile” became just such a road. It doesn’t serve our purpose here to recount his entire autobiography, since the movie this soundtrack is spawned from will do just that – no doubt with some parts made slightly fictional or more sensational for dramatic effect. As long as the basic premise of his life’s story remains true though, so does the “8 Mile Soundtrack” – a collaboration of various artists who follow all roads to a hip-hop Rome and end up travelling Eminem’s way to get there. And as all great journeys begin with a single step, so too does Eminem with this album’s opening song AND lead single entitled “Lose Yourself”:

“And these times are so hard, and it’s gettin even harder
Tryin to feed and water my seed plus, teeter-totter
Caught up between bein a father and a primadonna
Baby momma drama screamin on her too much for me to wanna
stay in one spot, another day of monotony
has gotten me to the point, I’m like a snail I’ve got
to formulate a plot, or end up in jail or shot
Success is my only motherfuckin option, failure’s not
Mom I love you but this trailer’s got to go
I cannot grow old in Salem’s Lot
So here I go it’s my shot, feet fail me not
This may be the only opportunity that I got”

Eminem doesn’t always produce stellar tracks for himself (always competent if occasionally bland) but on “Lose Yourself” he strikes a perfect balance with the assistance of Jeff Bass. Guitar riffs gradually build up the intensity during each verse, which thunders to a symphonic height in each chorus as it crashes into hard licks and tinkling pianoes. Eminem screams dire warnings in these breaks to all up-and-coming rap artists out there: “You only get one shot, do not miss your chance to blow; this opportunity comes once in a lifetime.” Indeed, that’s what Marshall’s life story and the movie based on it are supposed to be about – making sure to take that shot.

Obie Trice is also taking advantage of his opportunity on the following track “Love Me” featuring Eminem and 50 Cent. This track works on a technical level due to the charisma of the three MC’s, but on a musical level it doesn’t have the fire or passion of Eminem’s previous production. He does gain a little momentum back though on his solo song “8 Mile,” which features a stuttering beat that sounds like a mixture of Dr. Dre and the Neptunes. The rap here shows Eminem’s pre-superstar concerns about being able to make it big without falling on his face:

“I’m walkin these train tracks, tryin to regain back
the spirit I had ‘fore I go back to the same crap
To the same plant, and the same pants
Tryin to chase rap, gotta move ASAP
And get a new plan, momma’s got a new man
Poor little baby sister, she don’t understand
Sits in front of the TV, buries her nose in the pad
And just colors until the crayon gets dull in her hand
While she colors her big brother and mother and dad
Ain’t no tellin what really goes on in her little head
Wish I could be the daddy that neither one of us had
But I keep runnin from somethin I never wanted so bad!”

Obie Trice gets his own time to shine solo on the next cut “Adrenaline Rush” but one wonders if he realizes that Twista used that concept several years back. On top of that, the plodding and menacing beat by Spyda may be hard as hell, but doesn’t seem to have anything in common with adrenaline at all. 50 Cent is only slightly better served by Eminem’s beat on “Places to Go.” He’s a worthy addition to the Shady Records imprint, but he needs to be laced with some hot beats worthy of his hot mixtape reputation. D-12 fares somewhat better on their song “Rap Game” though:

“Now put that in your little pipe and wipe down
Think for a minute cause the hype had died down
That I won’t go up in the Oval Office right now
And clip whatever ain’t tied down upside down
I’m all for America, fuck the government
Tell that C. Delores Tucker slut to suck a dick”

As usual, Eminem’s not afraid to generate controversy, but his crew of Detroit homeboys still prove themselves to be worthy to hang with him on the mic lyrically. A change of pace from the Shady Records focus finally comes in the form of “8 Miles and Runnin'” featuring Jay-Z and Freeway. Eminem is still doing the music here, and it’s beginning to get a bit redundant to say he is not making hot beats all the time – but the sheer charisma of Jigga gets this track over where other rappers wouldn’t:

Thankfully the change in sound continues with the Denaun Porter produced Xzibit track “Spit Shine” and the Dante Ross produced Macy Gray song “Time of My Life.” This saves the soundtrack from hitting an unfortunate low in audio quality, despite the talent of those who appeared on it thus far. The trend continues on the self-produced Nas cut “U Wanna Be Me,” which features the kind of insightful material found on his recently released “Lost Tapes” LP:

“Now slowly, thinkin of all the things that oppose me
I think of kings who died and rappers out to dethrone me
For they crown they head is cut off, bodies is laid
Dead in the street, it’s so fuckin pitiful
First they love me, could be the bitch that even live with you
Mad at your riches, now she switched, turned miserable
Cause she wanna dress like Bonnie, Robin and Crystal do
But Crystal’s single, Bonnie’s broke and her niggaz too!”

The simplicity of Nasir’s track allows the lyrics to come to the forefront over a bare bones piano track and tapped drum loop; the kind of refreshing style of “back to the basics” more rappers should try instead of relying on the next Kayne West or Alchemist track to save their weak shit. There’s nothing wrong with pairing a good rapper with a good beat though when he doesn’t rely on it as a crutch, as both 50 Cent and Rakim prove on “Wanksta” and “R.A.K.I.M.” respectively. Of the latter, it’s good to finally hear The R back on a track after such a long hiatus. Not surprisingly the God still has his commanding voice and impeccable flow in full effect:

“Seminars and tracks cause comas and cardiacs
Broads and cats screamin OH MY GOD, he’s back
Just imagine, I hit the lab and get it crackin
A thousand styles in one verse, rhythms that switch patterns
Chicks get stabbed in the back ’til they get spasms Known to spit a magnum, or split a atom..”

The album closes on successively stronger notes, starting with the decent Young Zee track “That’s My Nigga,” stepping up to a higher level with the GangStarr track “Battle” (produced by Primo of course) and closing with Eminem’s only other superbly produced track besides the lead single: “Rabbit Run”:

“The pen explodes and bust, ink spills my guts
You think all I do is stand here and feel my nuts?
Well I’ma show you what, you gon’ feel my rush
You don’t feel it then it must be too real to touch
Peal the dutch, I’m about to tear shit up
Goosebumps yeah, I’ma make your hair sit up
Yeah sit up, I’ma tell you who I be
I’ma make you hate me, cause you ain’t me”

Overall this is one of the better rap related soundtracks to be released in a long time, although it drags a bit by the over-reliance on Shady Records stars (also featured on a bonus sampler in some copies) and on Eminem’s beats in particular. As a representative view of MC’s who’ve travelled the long road, from relative newcomers like 50 Cent and Obie to veterans like Jay-Z and Guru to old school like Rakim, this soundtrack covers the diaspora of East coast hip-hop from past to present very effectively. They may have taken different journeys to get here, but they all ended up on “8 Mile” and gave us the best they had to offer. It’s worth a trip down the road yourself to the record store to check this out.