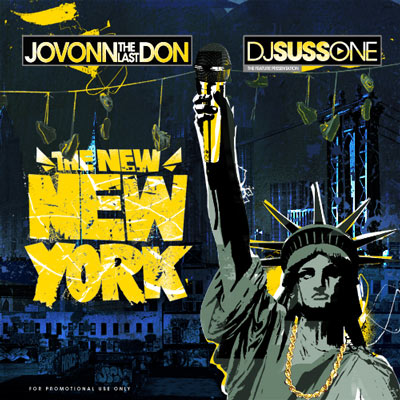 Those within range of New York FM signals are already familiar with Jovonn the Last Don, who hosts Power 105.1’s “The New N.Y.” local show. On his 2010 mix “The New New York” he teams up with DJ Suss One to supply an hour’s worth of tracks from various undiscovered rap artists from the five boroughs.

Most of the mix features gritty street rappers rhyming over simple, minimalist mixtape beats, although a few more established names roll through with appearances. Jadakiss aids Mysonne on the grimy opener “Try Your Luck,” Red Cafe abets Bravo on “I’m On,” and Sha Stimuli has his own track, the rugged “Follow the Leader.” Early highlights include “Go Hard,” where Sweet Peezy smoothly rhymes over a mean horn-laced beat, and Sikai’s mellow “Like a Star.” After a series of banal autotune-heavy tracks, Shinobi brings some energy on “Do It Like.” Karnell and A.P. come strong on their respective late songs “Calm Before the Storm” and “Sometimes I (Wonder).” A few R&B tracks are thrown in at the end for good measure: Trey Songz soundalike Nathan offers a decent ballad in “Superwoman,” and Lenisha closes the mix with her apologetic “Feel My Sorry.”

If Jovonn and Suss One’s mix does indeed portray ‘The New New York,’ then it’s safe to say that “The New New York” sounds a whole lot like the old oneâ€”most of these tracks could just as easily have appeared on a D-Block, DipSet, G-Unit, or Ruff Ryders tape from five years ago. Sean Shyst’s cash-cars-clothes shtick on “That’s All We Know” sounds like a poor man’s Jim Jones, and Fred the Godson does his best Lil Wayne imitation over a blippy beat on “Stripper.” The volume of songs relying on autotune is overwhelming; Euro’s “Easy” is painful. It also doesn’t help that a few of the tracks are labeled “Artist Unknown”â€”if this is supposed to introduce unsigned artists, well, good luck fellas.

“The New New York” doesn’t offer anything out of the ordinaryâ€”it’s 67 minutes of derivative, flossy gangsta rap that New Yorkers are already well used to hearing on Power 105’s local mixshows. As the title suggests, the songs all have a distinct New York sound and the rappers each boast an unmistakable New York swagger. Jovonn promises that this is the first of a series, so if he follows through then he’ll continue to release material from his playlist on mixtapes. These tapes always have a market among folks looking for unknown artists and something new to bump, but it’s really just a very conventional mixtape with simplistic production and middling rhymes.