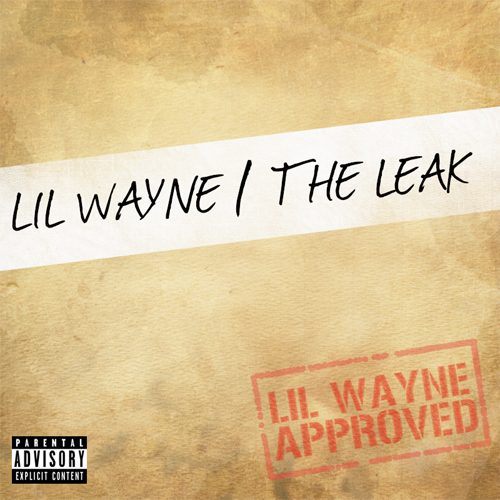 I’ll be honest – this CD confuses me. It’s in a slim jewel case with no information about who released it. The cover has a picture of Lil’ Wayne with “The Carter III” written on it, but when I put the disc in my computer, itunes called it “The Leak” (not to be confused with the EP of the same name released electronically in December). It isn’t a mixtape, per se â€“ where’s the loud cover? Where are the DJ shout-outs? Where’s Young Money’s commentary? From what I can gather from the Internet, this is a collection of leaked material from the “Carter III” sessions that Wayne decided to release as a mixtape. What really confuses me is how this fits in with Wayne’s other mixtape releases this year, or how these mixtapes work with his business plan in general. Who pays for his studio time? Who pays the producer? How do you make money when you pay Kanye for a beat and then release it on a mixtape? Most importantly, how does Universal, his record label, feel about all of this?

There is no question that Wayne is on the roll of a lifetime. He is going through an insanely prolific creative streak, even by hip hop’s album-a-year standards. He has recorded and released a bajillion songs in 2007, and almost as many mixtapes. He has also been on practically every album released last year, offering his croaky voice to artists as diverse as Jay-Z and Little Brother. After labeling himself the Best Rapper Alive a few years ago, he is on a mission to prove it, and he has definitely built up a solid body of work to prove his claim.

Lil’ Wayne reminds of the late writer Charles Bukowski. Both men produced mountains of work, and both men seemed to believe that almost anything they put down was worth publishing. Bukowski put out a million books and books of poetry that were all pretty much about him being a drunken asshole; Weezy, by comparison, has laid down hours of music in which he raps about money, jewels, weed, and bitches. From what I understand, he never writes his raps down, and instead free associates his rhymes while the tape is rolling. In the hands of a lesser talent, the end result wouldn’t any good, but Wayne makes it work. He manages to make even the most dubious rhyme schemes and lyrics sound good. On “Kush” he raps:

“You can’t find me ’cause I’m lost in the music
I’m runnin’ this and I can jump the hurdles
I feel like I’m racing a bunch of little turtles
Keep a bandana like the Ninja Turtles
I’m like a turtle, when I sip the purple”

If any other rapper tried to rhyme “turtle” three times in a row it would irritate the hell out of me. With Wayne, it sounds right. While his subject matter may not push the limits, his rhyming does. Lil’ Wayne is the master of one-liners and clever twists of phrase, which means that even when he’s rapping about nothing it still sounds brilliant.

The centerpiece of the album is the psychedelic drug opus “I Feel Like Dying.” The beat is an agonizingly slow reworking of indie-folk singer Karma’s “Once,” flipping her tale of addiction and codependence into a chorus of “Only when the drugs are gone/I feel like dying.” Wayne is at his tripped-out best, croaking lines like:

“I can mingle with the stars & throw a party on Mars
I am a prisoner locked up behind Xanax bars
I have just boarded a plane without a pilot
And violets are blue
Roses are red
Daisies are yellow
The flowers are dead
Wish I can give you this feeling that I feel like buying
And if my dealer don’t have no more, then (I feel like dying)”

Out of the 23 tracks on this disc, only a couple are less than stellar. By and large the beats are amazing, and Wayne is totally on point with his lyrics. “Diamonds and Girls” is an ode to jewelry built around a Prince sample; “Did It Before” features a soulful Kanye beat; “Money Ova Here” is pure Houston; and “Zoo” has a sparse and sinister beat, with Mack Maine and Wayne declaring “We just two niggas from the same hood/Fell from the same tree/Cut from the same wool/He the young lion and I’m the young bull/ Welcome to the zoo.” Unlike most mixtapes, there is no DJ shouting bullshit over the tracks, and as near as I can tell the beats are almost all original. Because of this, “The Leak” is not only one of the best mixtapes of 2007, it is also one of the best ALBUMS of 2007. If these are Wayne’s throw-aways, I can’t wait to hear what makes it onto the official “Carter III.”