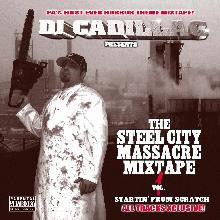 My wife pointed out to me the other day that it’s strange rap heads still call compilations of songs with scratching and blends “mixtapes” when most of them are released and distributed on CD, not cassette. I thought about it for a while and realized that she’s right, but that’s the funny thing about how slanguage evolves. While “mix” and “tape” may have at one time been seperate words in the 1980’s, when everybody from turntable wizard blenders to bedroom ghetto blaster dubbers all ran through ten packs of blank 90 minute joints, the words merged and the meaning took on a life of it’s own. These days the word “mixtape” doesn’t mean a physical cassette any more – it’s simply a word used to invoke the mental image of a DJ’s effort to bring you his top selections. Some simply offer the best “as is” with no enhancement, some are more about the ego of the DJ than the artists (the guys who shout themselves out 100 times on every song know who they are), some are meant to show off a producer’s beats as different MC’s flow to the shit, and some are meant to showcase one MC flowing with a lot of different beats and rappers. Mixtapes can be thematic, part of a series, or stand on their own. Mixtapes can feature seamless blends, Technics 1200 tricks, mashing up lyrics and instrumentals to make all new compositions, or any combination of the above. It’s amazing with all these different attributes, we can simply say the word “mixtape” and imply one type of hip-hop experience.

The visceral experience of forking out hard earned cash to the local DJ, street corner hustler, or mom & pop hip-hop store and getting a hard plastic case with a long stream of magnetic media stuffed inside is fading day by day. It’s good to know though that while the format and means of distribution for the “mixtape” may have changed, there are still DJ’s out there true to the spirit of the kings I grew up considering legends – Ron G, Kid Capri, and DJ Premier just to name a few. DJ Cadillac’s “Steel City Massacre Mixtape Vol. 1” shows that Pittsburgh may be an untapped mecca of hip-hop that’s getting slept on as people jump straight from Philadelphia to Chicago on their coast to coast map of rap. It’s been a long time since I’ve enjoyed a mixtape experience this much. These days too many mixtapes are full of indolent MC’s and unpleasant cliches, offering uninteresting fare presented in ways that do nothing to enhance the quality of the artists or say the DJ making it is anything special. Cadillac on the other hand seems to “get it” at a level that says he grew up on those same classic tapes, and that hip-hop runs as deep in his veins as plasma. The “Massacre” name is not just offered as a joke either. Cadillac actually offers an opening with snippets of dialogue from horror movies, and smoothly blends this into a sampling of his ability to sample and scratch. Let me make this short and sweet – son is NICEwith his. Everything from Tony Montana to “Eye of the Tiger” all become part of a jaw-dropping exercise that probably took mad hours to perfect and record, but breezes by you in what seems like seconds. Cadillac may be showing off, but I don’t mind. A good mixtape should make you want to listen twice just cause dude who put it together left you smiling and shaking (and/or nodding) your head at what the man behind the boards pulls off, and “Startin’ From Scratch” Cadillac is no exception.

As the mix moves on through more horror inspired dialogue, we get an introduction from “Flash” of Wiseguy Entertainment. Hey now! Well I guess I can’t complain, after all I got my handle from being a fan of the original Grandmaster Flash. And guess what? Flash is good on the mic:

“I just, snap like a Vietnam vet
Have niggaz runnin for they life like a bomb threat
I got a heavy fan base, and I ain’t really on yet
Still in the top spot – sucka I ain’t gone yet
Flash like Gordon, take over the rap game
retire then come back like Mike Jordan
You’ll be beggin for the Lord when my vocal chords release
My thoughts straight from the bottom of the heart of the streets”

More rappers I can only assume are local Pittsburgh talent get their time to shine, like Legend on “1000 Words or Less.” If you weren’t paying close attention, you might mistake him for Skillz, both vocally and lyrically. Cadillac gets his own on “You Can’t Do Me,” keeping the horror theme alive and flexing hot cuts and beats. Throughout the rest of the mixtape, Cadillac flips back and forth between the under-appreciated underground MC’s and local talent getting their shine on. Kamachi and Guru wreck “The Best.” Shogun Assassin offers a “Killarmy Exclusive.” Nina Capone jumps in the mix to prove she’s “The Arsonist” of female MC’s, seemingly taking the best parts of Lil’ Kim and Foxy Brown and making them her own. Minithin’s “Respect Mine” is a personal favorite, just because of the heavily thugged out intro and the squeaky violins that make up his beat, along with lines like “I got a Ph.D, intellect smart to haunt ya/ up down left right B A select start like Contra” that leave me wide open. If you’ve heard a new MC who sampled from Biggie (who himself sampled from “King of New York”) and called himself Frank White, his “Godfather Remix” can be found here, followed by an all-star Wu familia song featuring Hell Razah, Killah Priest and Beretta 9 called “How Gangstas Do.” Cadillac keeps on bringing the gothic theme to life throughout with skits like “The Terror Continues” that mix chainsaw sounds with Ice Cube snippets saying “take that motherfucker!” Damn, I dig it, almost as much as I dig him slicing up Slick Rick saying “there is no competition” before Legend’s track “Get Ur Party On.”

Things are wound up nicely towards the end of this album with the Lone Catalysts wrecking “Southern Lady,” Sam Sneed getting down with some “Lady Ecstasy,” The Foundation wrecking “All I Wanna Do” and Kamachi coming tight on “Nubian Queen.” While some artists I recognized on this mixtape and quite a few I didn’t, the quality throughout was surprisingly consistant and tight, making repeated listening a pleasure and sparking my interest to find out more about many undoubtedly dope Pittsburgh MC’s who just haven’t gotten their break nationally. Check out PittsburghHipHop.com if you want to find out more about Cadillac or any artists on “Steel City Massacre Mixtape Vol. 1.” You can also peep DJCadillac.net which I know I’ll do, because I’m already looking forward to “Massacre Mixtape Vol. 2.”