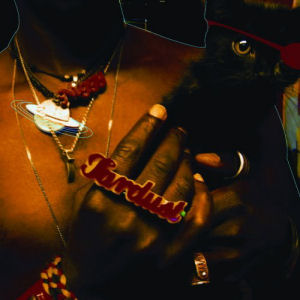 Saul Williams :: The Inevitable Rise and Liberation of Niggy Tardust

Saul Williams is perhaps the world’s most acclaimed spoken word poet. With his incredible talent, it should be easy for him to make a good album. He needs three simple ingredients: 1. his voice; 2. his words; and 3. beats he can play with. His lyrics are so profound and his investment in his message so apparent that he can effortlessly challenge his listeners. He just needs to talk.

On “The Inevitable Rise and Liberation of Niggy Tardust,” produced largely by Nine Inch Nails mastermind Trent Reznor and released for free in 2007 at NiggyTardust.com, when Saul Williams just talks, he is brilliant. But there is far too little talking and far too much singing, edgy production, and general gimmickry for the album to properly zero-in on Williams’ incredible talents as a poet. Put otherwise, instead of synthesizing their natural gifts, Saul and Trent try to do much too much. The result is a highly unfocused record which teases the listener with moments of bliss but ultimately never delivers.

“Skin of a Drum,” for example, begins with our slam poet’s complex spoken pontifications about his relationship with his father over Reznor’s effectively simple crate drums. This opening finds S.W. exactly in his element, his unadulterated mastery of language and speech taking center stage. He then starts to talk-sing, but remains in his comfort zone. Soon, though, the we get a jolting transition to a melodic chorus which feels mismatched with the verse. Over the course of the rest of the track, Williams treat us to a bit more spoken word, but also to a lot of out-of-place singing, including a forced neo-soul bridge well outside of the MC’s range. If “Skin of a Drum” were pure spoken word, it would be a standout. Hell, if the track were a clip of Williams debating politics with his uncle at Christmas it would be engaging. But, as it stands, the track is, at best, a tease. The farther the song deviates from Williams talking over a beat, the more distracting the song becomes.

Similarly, on the album’s opener, “Black History Month,” the listener has to wade through flat singing and awkward baritone for two-thirds of the track before arriving at its satisfying spoken word conclusion. On “DNA,” Williams’ otherwise engaging flow is slowed down to an unpleasant bass for the majority of the song so at to make it virtually unlistenable. If stripped down to Saul’s unproduced spoken word, each of these tracks would captivate, but the overproduction and overindulgence are too strong a distraction for the songs to succeed.

Reznor’s beats are what one would expect – busy drums and harsh melodies interspersed with scaled back dissonance and percussive minimalism. The NIN frontman hits his mark plenty. The low-fi electronica backing Saul’s rendition of the U2 classic “Sunday Bloody Sunday” gives the track a claustrophobic feel absent from the original. The dynamic build of “WTF” largely makes up for Williams’ lackluster singing. Indeed, the tone of the production matches that of the MC’s frantic aesthetic and dense delivery.

Still, while the beats are similar in mood to the vocals, the two are too often musically dissonant, resulting in production which too often pulls focus from Williams. The raucus drums and distorted guitar loop on “Convict Colony,” for example, feel hapharzard under Saul’s attempt at song. The heavy metal chorus on “Break” is a jolting interruption for the traditional spoken-word verses.

What is so frustrating about “Niggy Tardust” is that, despite the record’s tremendous flaws, the lyrical content is up to par. Williams engages in the abstract racialism, cosmic spirituality, and intimate indignance that made him his name. The problem with “The Inevitable Rise and Liberation of Niggy Tardust,” though, is everything else.