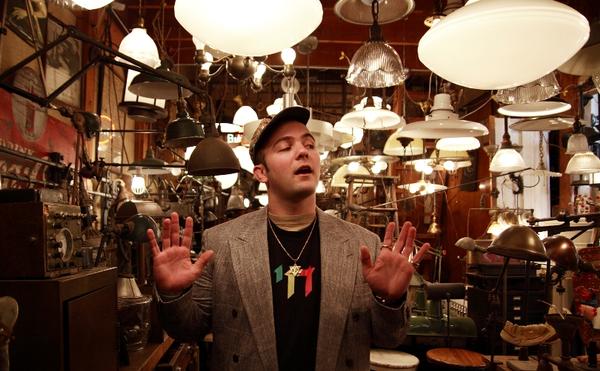 I’ve known Kosha Dillz for a few years now, and everywhere I go I see at least one of his “Oy Vey All Day” stickers posted up. The man is a promotional machine. He’s also pretty nice when it comes to putting lyrics to beats. His most recent release Beverly Dillz

was a bit of a departure for him, but people seem to have connected nicely with it as ever since it hit stores he’s been experiencing departures of a different variety – from airports. Kosha Dillz has been touring non-stop over the past handful of months, but RapReviews caught up with him to find out more about his hectic schedule, including how his tour with Matisyahu went. He also discussed his thoughts on hip-hop’s relationship with religion, and why Beverly Dillz has a bit of a party vibe.

Adam Bernard: Every time I hear from you you’re traveling to, or from, another interesting place. Tell everybody about some of your recent travels and what they’ve entailed.

Kosha Dillz: Oh wow. It’s so awesome to travel. Traveling has helped me expand into new frontiers. I recently rolled into London for the first time with just a suitcase and all my shows cancelled. A Raekwon show that had RZA on it, with RZA canceling the tour after my flights were booked, was still rocking, so I went on in there and told them I was the opener. I had nowhere to stay and there was mass confusion. I had to leave, but spoke with Rae. Somehow someway I pushed myself on stage for a nice 15 minute set, sold merch, and found some really cool people to stay with. I ended up on some Akil dates and basically bussed around the rest of the time. I even slept at a Rabbi’s in Wimbledon for a few days. Then I flew to Berlin to tour with Matisyahu.

AB: The Matisyahu tour was huge. Your music is nothing like his, though. Aside from having a shared religion, how did you connect with his audience?

KD: Well me and Matis had a really cool freestyle session that worked with the crowd. It brought an element to his show that combined hip-hop, rock and reggae into one moment of spontaneous explosion. For five to ten minutes every night the crowd would be hit with improv. They just loved the energy, and with 1,000+ people each time, you understood the necessity for the explosion.

AB: What have you learned from all this time on the road?

KD: Talent is useless and unappreciated if it only stays in its backyard. Artists need to be on the road in order to succeed and inspire themselves.

AB: Obviously you are Jewish. Do you make it a point to discuss your religion in your work, or do you prefer to keep that a private matter?

KD: Kosha Dillz says it all. I have lots of pride in my family, heritage, homeland, and religion. Just look at my name! It’s funky, fresh, and stereotype bending all in one.

But I concentrate on performing amazing songs. Once the impact is made from them, people become more open to ask me questions, rather than me trying to push anything on them. The only thing I push is enjoyment and awesomeness.

AB: Those are great things to push. Staying on the topic of religion; everyone thanks God in their liner notes, but in your opinion, what place does religion have in hip-hop?

KD: I think it has its place. Many people wear diamond crosses, and gold ones, as well. Many people celebrate holidays. Many people rap about the church and even Judaism. There are songs about being a Mormon, too. Hip-Hop is universal, and has a place in all areas of life.

. The album surprised me a bit because there are some party songs on it. Am I crazy, or is this something a little different for you?

KD: We wanted it to be a fun record and bring out a side that was more crossover. People want to have fun and I do, too. I want to preserve the heritage, but I also make sure my fans can dance suitable to my high energy show.

AB: With your work on Beverly Dillz, and your concept album with C-Rayz Walz (Freestyle vs. Written), you’re constantly switching things up with your work. What inspires you to experiment so much?

KD: ADD and traveling. I see that people want to come out and enjoy their time, rather than think too much, which is why I focused a lot on the energy and then let the lyrics come. With Belief producing the album, it gave me a new experience and something great for the listeners.

AB: Do you have any ideas regarding what your next musical endeavor might entail?

KD: All I have is ideas! I am planning on being on of the first Israeli/American citizens to play the WAGA Fest in Burkina Faso this October, thanks to the Trinity International Hip Hop festival. I also have a show with Snoop Dogg in Amsterdam and some Warped Tour fun, as well. On a different angle, I’m currently performing for some communities’ alcohol awareness for teens programs and doing freestyle workshops for middle schoolers and high school students. I’m also adding a live band element that has been successful in NYC and SXSW. I’m going to approach a multi faceted producer with an interesting sound for my next LP, and also continue to expand my experimental sounds in more languages, including Spanish and Hebrew. I’m also working on expanding on my PR and touring businesses. Currently, I do everything from assisting people with hardcore guerilla marketing, to helping “start up” artists get tour dates and generate buzz. I help people who others don’t think are worth it and push them to the limit. Then I watch them land on MTV and more.

AB: Damn, you’re a busy man. Before you have to go, hit people with three non-hip-hop related things about Kosha Dillz that you want people to know.

2) I wrestled since I was eight till I turned 20 with two years of Division I wrestling at Rutgers University.

3) It took me seven years, multiple felonies, and lots of jail time, to finish college. I finished with a degree in English, minor economics, and concentration in creative writing.

I also once sung Christmas carols at someone’s door for money.

KD: I’d like to thank everyone who read this. Please come to a show, and tell a friend. Word of mouth is our quickest form of promo. Peace to the Alive and Well Tour, Pig Pen, Pat Maine, Flex Mathews, Israel, New Jersey, Shemspeed, Diamond Music Group, Peter Oasis, Homeboy Sandman, and the Kosha Dillz video squad – Ally, Robbie, and Cage Free.