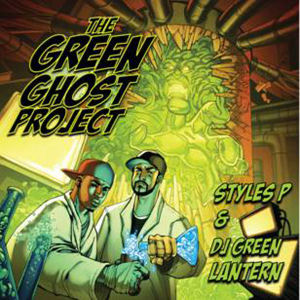 While the Yonkers, NY trio, The Lox haven’t officially released an album since 2000’s “We Are The Streets”, each member has remained busy and relevant through mixtapes and solo work. Last year, Jadakiss dropped his third album, “The Last Kiss” and Sheek Louch quietly released “Life on D-Block.” Back in 2002, Styles P landed a smash hit with his ode to cannabis setiva with his Freda Payne-sampling “I Get High” from his debut album, “A Gangster & A Gentleman”. He followed that up with 2006’s “Time Is Money” and “Super Gangster (Extraordinary Gentleman)” in 2007. In addition to those, the rapper affectionately known as Paniro has also dropped a fair amount of mixtapes including “Ghost In The Shell”, “Ghost In The Machine” and “The Phantom Menace”. His most recent project is a collaborative effort with DJ Green Lantern, entitled “The Green Ghost Project”. The album features production from not only Green Lantern, but also Dame Grease, Alchemist, Buckwild and Statik Selektah among others. Guest appearances include Jadakiss, Sheek Louch, N.O.R.E., Raekwon and M.O.P., along with a handful of others.

The “Project” kicks off with “Nothing To Lose” and “Double Trouble”. Both tracks are backed with frantic beats from Green Lantern. The latter features scratched in samples of Chuck D and also a verse from Sheek Louch. “Callin Me” contains a hook from Tre Williams and Styles raps about how the streets seem to be calling for him to make a triumphant return to them for one reason or another. Showcasing his willingness to take it on the chin, Styles tells his people that if he happens to get locked up, he won’t be constantly calling or asking people for money. Instead, he simply asks them to “Send A Kite” and send a little love. Junior Reid and Jadakiss make an appearance on “Invasion” but the Reid hook is rather simple and borders on being annoying. “Pablo Doe” features N.O.R.E. and Uncle Murda. The Green Lantern beat fits the flow of the three emcees well, but Murda and N.O.R.E. steal the show. Things get metaphorical with Styles confessing his love for his microphone, his pistol and his weed sack, as he raps:

“You my main chick
You was always there for me, going through this pain shit
Helped with my rhymes, helped me flip cocaine shit
You know my (pretty young thing) maintains shit
Yeah I know everybody hit her, but it’s different when I’m with her
‘Cause she knows imma split her
And she like it when I rhyme to her
Pull her real close to me, say a couple lines to her
I know some will do a dime witcha’, maybe even twenty
But S.P. will die witcha’
You know, go out with a toe tag
You didn’t know, my (pretty little thing), that’s my smoke bag”

“Shadows” and “Legal Money” both boast some nasty production from Statik Selektah and Vinny Idol respectively, but one of the biggest treats on the album is “Bang Time” which features M.O.P. and another beat from Green Lantern as the crew from Brownsville bring just the right amount of energy and aggression to the track. Styles manages to hold his own with Lil Fame and Billy Danze, but the Mash Out Posse ends up outshining the Ghost by the slimmest of margins. As things come to a close, some will say that all Styles ever raps about is getting high and committing crimes. While that’s not completely true, I understand the point that they’d like to make. There are a hell of a lot of rappers that hinge on the same topics. I suppose what sets Paniro apart from many of the others is his voice and conviction in his lyrics. With that said, Styles more than likely will not attract any new fans with this release, but I don’t think there’s any danger of him losing any either. Perhaps this “Project” was successful after all.