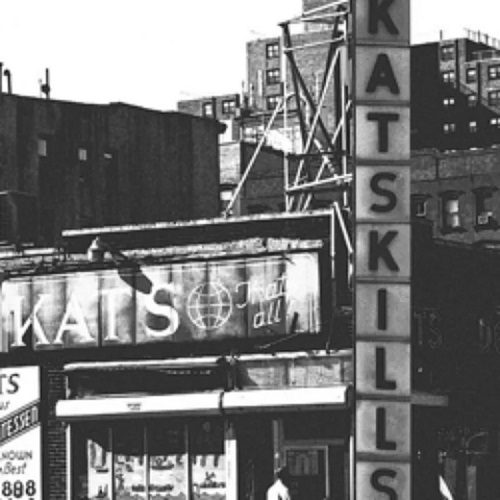 Kats is an underground emcee hailing from Brooklyn and down with underground rapper/producer Domer. Domer made waves a few months back with a contest where he invited fans to produce music to his vocals and then released the most popular tracks for free. It was a novel idea that reflected the creativity and openness that can be found in the underground rap scene. “Katskills” embodies that same creativity, both musically and lyrically. Kats lets his rapid fire flow loose over 13 tracks that range from conventional hip-hop to unique samples. As can be the case with underground rap, “Katskills” is both an acquired taste and universally good. When Kats sticks to the more conventional rap he can drop music that I’d consider universally good. When he lets his creativity shine I wouldn’t call his music bad, but it does become an acquired taste.

Things start off on the good side with the intro as Kats lets us know what he’s all about:

“I’m the get it on credit and the regret type
Better yet the type to bet it and let it ride
I put my life in these verses so now I’m dead inside
Get it right, Kats not the type to just let it slide
Vendetta type, long memory elephant like
I set them up with the left and got a hell of a right
They never see it coming like it’s in the dead of the night
It’s no embellishment, I tell I excel on the mic
Now I’m getting you hype, like Kats is sick
He can spit, man I’m telling you, right
If he could ever get his Benjamins or melanin right
He’d be alright in my book, look he’s shredding the mic
Competitors get ready to fight
I’m ready to sever your head and your forgettable life”

Things become much more creative and experimental on “Let’s Go” and this is when Kats becomes an acquired taste. The hype beat and techno influence synths are certainly not bad and Kats has every right to try to make his version of a party track, but the song lacks the universal appeal necessary for it to work. The hook is just loud, guttural yelling and Kats verses don’t do much to move the crowd. Kats gets back to the more conventional rap on “Breathe Inâ€¦ Breathe Out” where he is provided a sweet soul sample, but uses the smooth instrumental as an opportunity to vent:

“I hate when little wannabes want to be real rappers
I hate when real rappers want to be singers and actors
I hate when actors want to be politically active
I hate when politicians lie and try to mix in acting
I hate the way that rap is marketed to children
I hate a conscious rapper even more, shit ain’t real man
Talk is cheap, ain’t even worth a dollar
So spare me the knowledge of a phony fucking scholar
But you don’t want to be involved
Like the FDA issuing a be free call
I hate golf, I hate it when it rains in December
Probably hate my childhood, but I hate to remember”

Kats gets whiny on the track, but he has one or two funny lines that save the track. The most interesting thing to me is how he complains about “wannabe” rappers and conscious rappers as he would probably considered both by the general hip-hop population. The album maintains and up and down pattern throughout with the mixture of tracks. “Say Something” is a dope track full of clever battle raps, but it is then followed by “Summertime” which features a beat that you’ll either consider genius or corny.

Overall, Kats lies somewhere in between universally good rap and niche rap. I’m not sure of its his somewhat irritating voice or the fact that the man can come off as a little corny, but at times Kats reminds me a bit of MC Paul Barman and that’s not a good thing. I’d say some of his verses are solid and clever, but his flow and voice holds him back. The beats are dope for the most part, if a little out there at times, but I won’t knock him for getting some creative producers. In the end, if you can be open about your rap music then Kats may appeal to you, but if flow and swagger are important to you Kats will likely come off sounding wack.