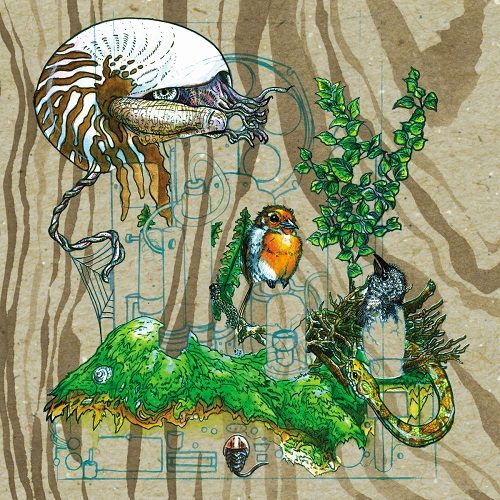 “A Miraculous Kind of Machine” is the third album by Brooklyn duo Junk Science. Their last album, 2007’s “Gran’Dad’s Nerve Tonic,” was released through Def Jux. Given that label’s indefinite hiatus, their new record is wisely being released on rapper Baje One’s label, Modern Shark.

The Def Jux connection is pretty apparent in Baje One’s rapping. He sounds like El-P’s younger, happy-go-lucky brother. Their voices sound similar, and on Baje One’s more intense moments, like “Running Shoes,” he could be mistaking for El Producto himself. However, where El-P seems weighted down by the weight of the world, Baje One is more positive and upbeat. He even went out of his way to make sure there was no cursing on the album.

Baje One’s partner in crime is DJ Snafu, who handles all the production on the album. He describes his style as lo-fi, which is pretty dead on. His beats feature an acoustic drum sound and a lot of left-field samples, and the resulting sound is like a less melancholy DJ Shadow, or the Roots reimagined as a sixties garage band. Things start off with “The Syllabus,” which combines horns, banging drums, and a delicate guitar riff that sounds like Coldplay. The album’s highlight comes early, with the burst of energy that is “Fire Drill.” Snafu works a short vocal sample over a sloppy, driving drum beat, and Baje One works some serious verbal calisthenics. They slow things down for “Clark Kent,” which feels like “Odelay”-era Beck, which sees Baje One dropping gems like:

“If you don’t jump high enough they say that they’re gonna fire you
How fly are you?
Why’d you think we hired you?
Your only option: jump a little higher dude
That’s not an option like swinging when the cops come
Sure, you can do it, but you’re stupid, they got shotguns”

Baje One is able on the mic, laid back and generally good-natured. Along with El-P, you could compare him to Atmosphere, who also has a casual rapping style and tendency to rap about real life concerns over battle rhymes or party anthems. He’s not as good a rapper as either of them, which is obvious on “Really, Man,” and “Monty Flython.” Both songs see him trying to get deep without succeeding. Snafu’s featherweight jazz beat on “Really, Man” and repetitive organs on “Monty Flython,” make those tracks the low points of “A Miraculous Kind of Machine.”

Things get better on “Sailing,” which has a sinister, glitchy synthesizer beat, and sees Baje One railing against corporations. “If you can’t relate to what I say/Don’t like the way I say it/Then it’s probably safe to say that you don’t like me as a rapper,” he raps, doing his best Aesop Rock impersonation with lines like “I could rap my shopping plans/Like two quarts of milk/Celery, eggs/Newports and Kale/Ketamine, steaks.” Cool Calm Pete turns up on “Millins,” flossing while Baje One criticizes consumer culture. Tone Tank makes a hilarious cameo on “Words From the Prez,” asking, “Have you ever saw a cornblower lesbian Puerto Rican dwarf?” Cavalier and Ghost Baby Zero offer verses on the trip-hop “Steel Will,” and “First Snow” rides an 8-bit Nintendo beat, to good effect.

At the end of the day, “A Miraculous Kind of Machine” offers enough high points to make it worth a listen for fans of left-of-center hip hop. On their finer moments, like “Running Shoes” and “Fire Drill,” they offer a winning combination of unique beats and clever wordplay, all with a focus on the positive.