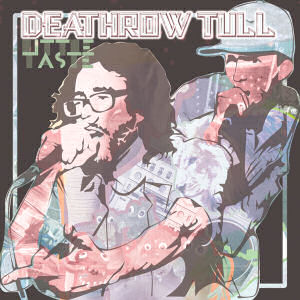 Twelve years ago underground rapper Dyalekt met RR stafferAdam B. Three years ago Dyalekt debuted his one-man hip-hopTHEATER show called “Square Peg Syndrome.” As fascinating as his concept was, the RR audience wasn’t quite ready for what D had to offer yet (or vice versa) and B had already turned in three interviews that month SO his feature on Dyalekt became an Adam’s World exclusive. Time has passed, Dyalekt’s sound has advanced, and now he’s got a partner by the name of brokeMC to help him bring his vision to the masses. Still what’s an up-and-coming rapper who can’t get a CD onto retail shelves at Best Buy and Target to do? Well if you’re a long-time reader of this website, you already know the answer…

… YOU GIVE IT AWAY FOR FREE.

That’s right – brokeMC and Dyalekt decided to give the public a “Little Taste” of what they’re doing entirely gratis under the name ofDeathrow Tull. There are two possible puns their band name has – one would only be recognized by history buffs and the other (and more likely) reference pays homage to a British rock band. Making a comparison to a band seems somewhat apt as Deathrow Tull can be best described as “arthouse rap,” and although that term would have negative connotations to some none is intended here. Perhaps the words of “Ain’t” will help clarify:

“Gather ’round everybody, join in
Let’s all smoke a joint then I’ll tell you somethin poignant
Truthfully, how could I make any cheese at Mickey D’s
I’ll probably be a brokeMC like my homey
BrokeMC, it’s amazin the money you get
from changin my Dyalekt
But fuck that shit, I got a record to break
So I’ll set it straight, and tell y’all what it is and what it ain’t
A pound of pain and an ounce of intelligence
to recognize an emcee’s irrelevance, in the game today
But I didn’t come here to complain today”

At times the raps on the song can be hard to discern as they are subsumed by the uptempo and noisy layers of the musical backdrop, but thankfully you are rewarded for paying more attention by the fact the artists have something interesting to say. It’s worth noting though that the title track is as close as this group comes to making a commercially viable song, vaguely reminiscent of the kind of tune Asher Roth would drop minus the carefree frat boy repertoire. Deathrow Tull seem to revel in this type of contradiction, declaring on “Friday Night” that they are both “your enemy” and “your guiding light.” That makes them arthouse rap – unconventional, interesting and intellectually stimulating but quite frankly inaccessible to 98% of rap’s audience. Even fans of Project Blowed, Hiero or El-Producto might listen to Deathrow Tull and go “I don’t get it.”

It is perhaps bad timing to hear this after Dark Time Sunshine’s album, which aims for a similar audience but whose production and guest stars were easier to digest. It’s hard to rag too much given this album is given away for nothing though, but it serves as fair warning to say this EP just isn’t for everyone.