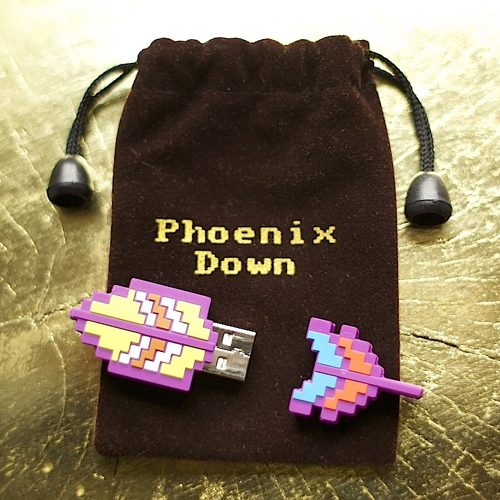 UP UP DOWN DOWN LEFT RIGHT LEFT RIGHT B A… yes, it’s the Konami code!

As a throwback to classic video games, Junk Science lets loose on a new label with a definitely new sound in “Phoenix Down.” With Def Jux going on “hiatus,” Baje One of Junk Science started his own label, Modern Shark, and thus creating new projects with an original sound. As they stray away from the classic Def Jux sound, Junk Science (Baje One and DJ Snafu) teams up with producer Scott Thorough from Nuclear family and pays homage to video game instrumentals. Scott Throrough’s production takes advantage of the use of 8-bit synthesizers to authenticate the classic sounds that resonate throughout the album as Junk Science says, “Phoenix Down” isn’t ABOUT video games per se, it’s more like games are the backdrop, the influence behind the music.”

“Phoenix Down” commences with “Box Art,” an introduction to the steadily growing world of technology. The minute you hear the track, there is no doubt that the sounds are reminiscent of your childhood days sitting in front of the television with a game controller in hand. With sounds similar to Junk Science’s track “First Snow” in their previous album, “A Miraculous Kind of Machine”, their new track, “Pixelated” relates to the future as being pixilated and blurry as Baje One says:

For those of you who remember, using the Konami code in the “Contra” title screen gave you thirty lives and with this in mind, Junk Science ties it all together in “30 Lives.” They actually sing the Konami code for the two-player version in an amusing track that takes you back to your youth. In a poignant way, Junk Science connects through their music and deciphers how life would be if we all had thirty lives. Baja One puts in into perspective as he says:

“You can say that it has no effect
Because the ending’s always the same
But sometimes the ending changes
Depending on how you play the game
So if you had the option to hit reset
And do it all again who would you be next?
Would you be the same self or a little better
Same type of story, switch a few letters
Waterproof skin to provide for the weather
Bulletproof heart underneath that sweater
Would you change race, switch class?”

Emcee Homeboy Sandman joins Junk Science in the upbeat “You Could Have That” and shows their competition that they can have everything else but their music. Although the group maintains an entertaining character, the track lacks in lyrical strength as the singing in the chorus remains pitchy at times.

“Phoenix Down” was engaging to say the least, as it brought me back to my childhood and made me remember my more youthful days. Their use of the 8-bit synthesizers was spot on to the sounds we all once heard in classic video games. The nostalgia throughout the album was endless, but unfortunately the lyrics fell short. I can see how difficult it is to pair lyrics with these instrumentals, but in many tracks, the lyrics didn’t make sense or attempted to take you on a metaphorical journey that was too difficult to comprehend. It’s apparent that Junk Science does not lack creativity and originality; they are truly in their own category. They are definite risk takers and take their passion for video games to another level. For this they should be applauded.