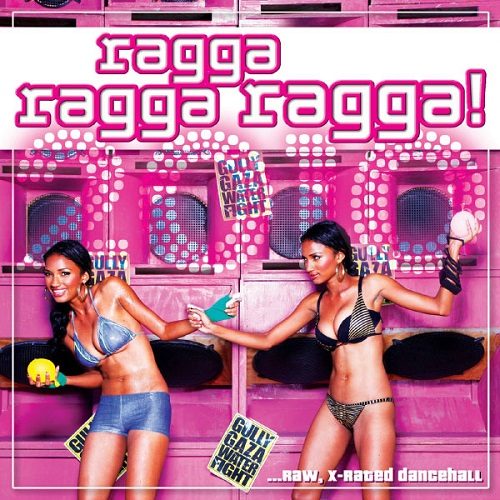 To be honest, I went years buying the “Ragga Ragga Ragga!” series without ever really researching what exactly differentiates ragga from regular dancehall. All I knew was that “Ragga” CDs tended to have harder, more hip-hop oriented dancehall tracks, while traditional dancehall albums mixed both modern and more conventional dancehall sounds. As Greensleeves hit us up with their latest “Ragga Ragga Ragga!” CD I decided to do some wiki research and found out raggamuffin (ragga for short) music was the term used for dancehall with electronic music and chatting/rapping deejays. Ragga doesn’t mirror hip-hop strictly on a musical level, as ragga artists also tend to touch upon the same topics rap artists enjoy. “Ragga Ragga Ragga! 2010” is a prime example of the similarities. The CD is bursting with 18 hard core ragga tracks that range from gangsta, conscious, to club songs.

Featured prominently on this compilation is Mavado, a dancehall artist that recently caused some controversy for his cameo in Drake’s “Find Your Love” video. In the video, Mavado portrays a ruthless Jamaican gangsta ready to kill Drake for sleeping with one of his women. The Jamaican tourism department is understandably upset with such a harsh portrayal of the country in mainstream media. The reality is Jamaica is very much a crime ridden country and dancehall artists from Bounty Killer to Degree and Spragga Benz have always reflected as much in their music. Mavado’s music carries a similar theme. “War Is In the Air” is a haunting, ruthless account of life in Jamaica. “Gal Ova Gun” and “She Beat Him” take a more “mainstream” approach to the music with Mavado addressing male/female relationships in both songs. Bounty Killer shows up dropping another gem in the form “Social Responsibility,” pleading for the government and society in general to take some responsibility for the conditions in Jamaica. Other familiar names include Vybz Kartel and Gyptian. Vybz Kartel shows up for three tracks, all of which are very different from each other. “Neva Scared” is a hardcore anthem meant to get the crowd rowdy. “Go Go Club” is a raunchy club song promoting unbridled sexuality. “Love Dem” contradicts that message with an emotional plea for forgiveness after being caught cheating. Gyptian contributes a catchy song with “Hold You,” though the song also exudes a raunchy, sexual message. Out of the newcomers, Erup stands out with his rock inspired “How We Ride” where he interpolates “Five to One” by The Doors with success. Gappy Ranks also shines with “Controversy Sells” where he evokes the spirit of Bounty Killer and the smooth flow of Mavado. The combination works quite well.

Overall, “Ragga Ragga Ragga! 2010” serves as a good introduction to and recap of ragga music. If you are new to this genre and you dig hardcore/social raps with club friendly beats you might want to give this a shot. You will likely not like all of the music on here as they cover the full spectrum, from pop oriented ragga to street inspired ragga. The thick Jamaican accent and fact that technically the artists are speaking Patois, a dialect of English, may make the music hard to enjoy for some. Personally, I got hooked into dancehall when I first heard Buju Banton’s “Til Shiloh” and have been a fan since. It took a while to adjust to the dialect, but once you understand what they say, the music and the lyrics definitely make ragga as enjoyable as hip-hop.