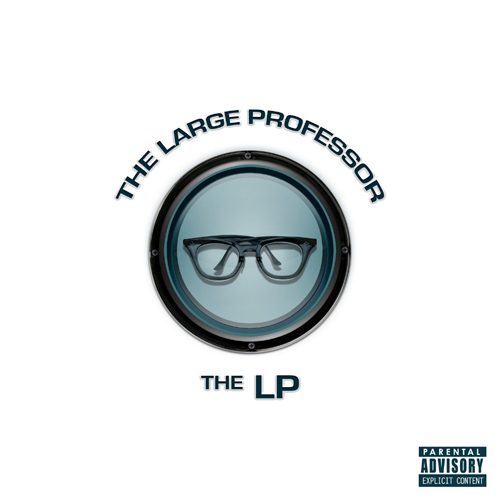 In the entertainment biz, video games that are developed but never finished and/or released are described as “prototypes.” Video games that are promoted but never released are referred to as “vaporware.” Large Professor’s “The LP” exhibits both of these qualities. This album has never officially appeared on retail store shelves anywhere, although it may be one of the most bootlegged “prototype” CD’s of all time. Large Pro was at one time signed to Geffen Records in the 1990’s, which heavily advertised his “forthcoming album” even though they never released one; so it’s definitely “vaporware” too. This promotional copy, distributed for free by some online retailers with orders of his “1st Class” album, came with no gem case or liner notes whatsoever – just a plain CD in a white envelope with this tracklisting stamped on it:

A few of these tracks did see limited release through Geffen. “Get Off That Bullshit” made the rounds at underground and hip-hop oriented radio stations, so it was probably cut as a promo. “IJUSWANNACHILL” and “The Mad Scientist” were both available as singles for a short amount of time. On the strength of the stellar production of these three cuts alone and Large Pro’s more than serviceable rhymes (highly reminiscent of his Main Source era) this album should never have disappeared into hip-hop rumor and legend. Just peep these lines from “Get Off That Bullshit” for a little taste:

“When opportunity knocks you got to answer nowadays
To make power plays we must change our ways
And use all the resources that life has to offer
Strong will survive, weak will get softer
So get offa, the bullshit is the name of the poem
To the metronome, take it one time to the dome
As the right type of hype kid, you know I’m legit
With my new funk hit, get off the bullshit”

Many people have also heard “One Plus One,” a duet with Nas that probably got saved by some wise intern who realised how classic this song was even if the short-sighted executives at his label didn’t. Usually Extra P ends up providing magic for Nas behind the boards, but this duet between them is what fans of both have always wanted: Pro on a Nas track behind AND in front of the boards. Neither one dissapoints:

“The greatest lesson ever learned, has yet to be taught
Niggaz running outta court like – what the fuck they thought?
It made me somber, my mans I just can’t picture bein locked up
They used to bein mad fly, 850 I style
Cherokee, letters read Nas they could never bury me
but through me, my nigga you free
Truly, reppin QB, my life is like a movie
The credits at the end and the film plays again
The script is every rhyme I ever said off the gin
Bloodshot Hennessy eyes, Infinity drives
without a sound, Queens bound…” – Nas

“The stages and phases that we go through
in a lifetime, may be more than a few
Cause one day you’re A and the next you may
have a brand new topic and see a new way
Like history, while it’s repeatin I’m beating
the drum on the dumb and blurry don’t worry
The least bit, about shit when the weak split
The raw brain remain, long reign
This is possible, I know, and charge like a rhino bro
I gotta let this music go…” – Extra P

This quasi-bootleg is packed with the king of musical madness that “1st Class” should have had but failed to deliver. It’s got one classic rap track after another: the jazzy atmospherics of “Spacey,” the mellow relaxed vibes of “For My People,” and a track titled “Hungry” that accurately describes LP’s flow throughout this LP called “LP.” He says it best himself:

“To all the critics that keep criticizin; y’all don’t know about shit!
I’m strictly large core without intermission I’ll split
Your whole rap staff in half, then laugh
Cause I done mastered the art and the craft”

It’s a shame that music industry politics and a lack of niche for a hardcore underground rap album by a legendary hip-hop rapper and producer. It’s a shame many of the people who bought his new album looking for the bomb who ended up being dissapointed didn’t get this one instead. Too many great rap albums have been lost over the years for this reason, but maybe some day Large Pro will be able to do a Nas style “Lost Tapes” and give this one the proper release it truly deserves. If you can find (dare I say, even DOWNLOAD) a copy of “The LP” by Large Professor, don’t miss the chance to cop it. Even if you’re not a Main Source fan or don’t know about the Prof other than the stellar rap tracks he produces for East coast giants, true hip-hop heads will still love it. Take this chance to get to know “The Mad Scientist” a little better.