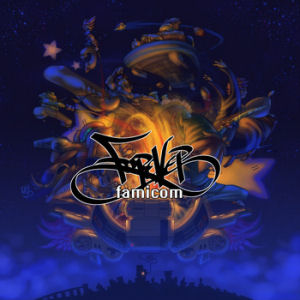 Almost one month ago Hip-Hop Shop interviewed Random a/k/a Mega Ran and producer du jour K-Murdock about their new collaborative album “Forever Famicom.” The project was born out of their mutual admiration for the video games of yesteryear, from an era where technological limits meant the box art the games came in often had little to do with the game you wound up playing. While some of you reading are too young to have ever experienced a video game that didn’t come as a shiny silver flat disc, old school heads from Atari to Nintendo to Sega (along with a dozen other underground consoles) remember CARTS – big chunky plastic blobs that pawn shop owners nicknamed TAPES because the format had the same limitations as 8-tracks: plug it in and PRAY it plays correctly.

Old school carts had another limitation – manufacturers could only cram so many expensive ROM chips inside to hold the game data, which meant you couldn’t get full symphonic soundtracks like today’s video games. Music had to be generated by the game console itself, which left you at the mercy of the quality of the chips stuffed inside it as well as how creative the composers could be pulling actual music OUT of it. In gaming’s earliest days that often meant hilariously bad or outright annoying melodies, especially given the people coding the tunes were often the game designer as opposed to trained musicians, but as Nintendo ushered in a new era of gaming in the mid to late ’80s, the technology in the consoles and the sophistication of the game producers led to an era that’s now fondly remembered for “chiptunes” gamers can still hum today – from the simplest Mario Bros. melody to the complex and often epic songs in the background of many role-playing games.

“Forever Famicom” embraces the nostalgia for gaming’s second era of home consoles, a time that blew away the simplicity of what could be done on Atari 2600 or Intellivision before it, yet still seems incredibly primitive compared to today’s high-powered consoles like Sony PS3 or the X-Box 360. It’s easy to argue that this is just a “throwback” retro movement, and if you like you can break out your Nintendo Power Glove and your Rob the Robot and relive the glory days, but “Forever Famicom” doesn’t just cash in on a trip down memory lane like a tired VH1 TV concept. Like the Transformers toys of the same timeframe, this album is more than meets the eye – modern-day hip-hop in disguise. When you play this album you discover that K-Murdock has pulled these old memorable tunes into today’s hip-hop soundscape, occasionally kicking and screaming in protest, until he beat them into submission with scratches and beats that give them a totally new sound.

Case in point – you don’t have to have played Faxanadu on the original NES to appreciate how awesome “World Tree” is. In fact, let’s be honest – it’s better if you don’t. The game’s music is quite honestly superior to the gameplay – left to right scroller that for my money was a poor man’s Zelda II, though if you fondly remember it more power to you. I have a copy that DOESN’Tgather dust (I’m anal-retentive about keeping my games in dust sleeves) but probably has a cobweb or two given how rarely I pull it out. Even if “World Tree” were a cartridge instead of an MP3, it would gather neither – this song’s high powered scratches by Damu the Fudgemunk and K-Murdock’s clever manipulation of the original game’s electronic melody go beyond interpolation into AWESOME. As Random raps, you’re transported from back in the day to the present like a TARDIS traveller, as he reminds you to “plug your headphones up and let us in/we used to get it in blowing on connector pins.” (If you have carts PLEASE don’t blow on them, it corrodes those said same pins, even if it makes it work better for short periods of time.) Or take “Dream Master” – a rap song based directly on a now sadly obscure NES classic where Random tells his life story in a way that transcends the game’s Nemo origins.

“Vowed to stay true when he dropped his debut
And did, so this got his little name up
And it was money in the bank, but money drew a blank
Every time the second LP came up
So he thought back to childhood
And how he survived in such a wild hood
Then he realized, they didn’t hate him
And whatever didn’t break him, that’s what made him
So he decided to combine his love for the games and raps
Open his soul up and let ’em in
Then he chopped up some 8 bit sounds, put it down
Now Random is now known as Mega Ran
Now his name’s all over that internet
Girls who didn’t care are now interested
And the best part of the story, comes at the end
But that part hasn’t been written yet”

Random’s been well-noted in past reviews for his ability to write raps that “keep it real” without being based on really fake pretences, and “Dream Master” lives up to that standard. He’s talented enough he could pen a rap about being the hardest G on the streets and it would be entirely believable, but talking about his mom buying him a Nintendo to keep him OFF those streets as a kid is a reality so many people know but so few are actually willing to verbalize. As more time goes by though and more people are either nostalgic for a simpler day of games where you only needed two to four buttons to control the action, and more people decide retro is a cool fad to get into, more hardcore rappers will come out of the closet and admit they spent as many hours playing “Secret of Mana” as K-Murdock and Random did – and those SNES beats cause Ran to proclaim you can Skype him if you’re able to and be a “Player Two.” The title is a clever pun on the fact that the game was one of those rare RPG’s NOT for one player alone – a second or even a third friend could join in.

The song is another example of how “Forever Famicom” works on multiple levels – some heads will get remember the chiptunes and get the inside jokes, while non-gamers will enjoy the quality of K-Murdock’s beats and Random’s rhymes. It’s not as though either one is a new jack at their craft – Doc has a ton of experience under his belt making his own shit along with Panacea hip-hop classics with Raw Poetic, while Random’s been steadily building up his name since we first got “The Call” in 2006. While people who are gamers will probably enjoy songs like “Galaxies” more just for the Metroid samples, the guitar playing of Matt Howatt and the rhymes of Random take it to a whole new level of cool that can’t be ignored – just like this entire release. It’s hard to argue with the price point either – 14 songs for $8 – but you don’t have to buy it first to find out whether or not you’ll dig their gamer vibe. Check out Hip-Hop Shop or listen to the Bandcamp samples and if old school chiptunes meeting new school attitude isn’t your thing you can take a pass on it. Somehow though, I don’t think you will.