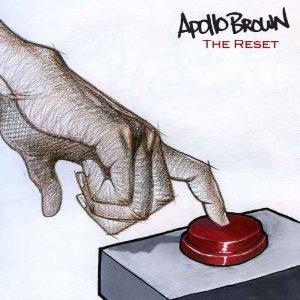 If the best hip-hop is born out of hard times and struggles, then Detroit is about to blow up. The Motor City has been getting kicked in the teeth for the past twenty years, and just when it seems like it has hit rock bottom, the bottom falls out again. Detroit suffers from the recession, foreclosures, a violent crime rate five times higher than average, and an unemployment rate of either 15% or 50%, depending on who you ask. Out of this mess comes some of the most promising hip-hop in the nation. Artists like Black Milk, Finale, and now Apollo Brown are making hip-hop that is gritty, urgent, and real.

“The Reset” is a remix album that contains 14 reimaginings of songs by the new stable of underground rappers. The MC’s read like a roll call of hip-hop’s recent underground resurgence: Oddisee, Sareem Poems, Rapper Big Pooh, Black Milk, Diamond District, John Robinson, Declaime, Finale, MED, Stik Figa, Magestik Legend, and more. All of these artists have contributed to the rise of real hip-hop in the past few years, a renaissance that reminds me of the good old days of Rawkus in the late 90s. This is hip-hop that is focused on beats and rhymes, rappers dedicated to the art who don’t feel the need to cash in on the newest pop trend in order to sell a record.

While “The Reset” is a remix album, it doesn’t include any radical deconstructions. From what I can tell, the songs are presented with a different beat under the original vocals. There may be some new verses on some of the tracks, but since I’m only familiar with two of the originals, it’s hard for me to say. Apollo’s conservative approach to the remix says something about his style. He’s a traditionalist, not an avant-garde visionary. He won’t be confused with Flying Lotus.

Apollo Brown’s bio makes a big point of his love of 70s rock like Journey and the Carpenters, but for the most part, this album is dusty soul. “Hunger” has chopped horns, “Lower That Boom” reconfigures soulful strings, and “Turn & Run” and “Odds Ain’t Fair” flip soul samples. His love of 70s AOR does show it’s head on “Balance,” which sounds like a Steve Miller sample, but still funky. Apollo’s beats hit hard, offering some serious trunk-rattling head nod. His piece de resistance is a remix of Diamond District’s “Streets Won’t Let Me Chill,” in which he uses the funky drummer sample, layered with a harpsichord. The beat adds some old-school heft to the District’s power track, while the harpsichord gives the song an eerie melody.

The MCs on this album are all good to great. The Left pays tribute to his hometown on “Real Detroit”; Stik Figa channels his inner poet on “Seasons”; John Robinson and Kenn Star lament a deceased friend in “Balance.” For the most part the music is serious and raw, detailing the struggles of life in the ghetto. It’s not all somber, though. Buff1 and Magestik Legend get their flossing on with “Brag Language,” and Declaime, Prince Po and Finale make some “Ghetto Soul Music.”

“The Reset” is an excellent introduction to a rising production talent. It is also a great overview of some of the better underground rappers, and proof that there is a place for real hip-hop in this world. Whether you’ve heard the originals or not, “The Reset” is worth picking up.