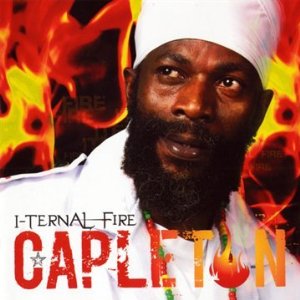 A long time ago during my college days I got my first exposure to Capleton through a remix of his hit single “Wings of the Morning” featuring Method Man. Given my near hero-worship of the Wu-Tang at the time, my love of the song had much more to do with Meth’s rap than Capleton’s crooning, though the catchy “there is no escape from King Selassie I” hook has stuck with me to present day. As such it was a pleasant surprise when Capleton’s “I-Ternal Fire” landed on my desk, a long overdue chance to get reacquainted with what the soulful Jamaican superstar had been up to in the last decade plus.

Doing my research before this review I found the artist born Clifton George Bailey III hasn’t been without controversy in the intervening years, having had at least two concert tours canceled due to protests over his music’s perceived homophobia. While I wouldn’t endorse the “batty bwoi dead” chatter of any Jamaican musician, it seems unfair to single out Capleton for these complaints given these sentiments are endemic to commercially successful reggae artists. Even Capleton has stated that his words are being judged outside their cultural context, so perhaps those who want real change should advocate for an educational shift toward tolerance instead.

The funny thing is you have to work REALLY hard to hear anything that sounds hateful or homophobic on “I-Ternal Fire.” While I don’t profess to be a fluent speaker of Jamaican slang, Capleton is not spending an inordinate amount of time using patois on the album. Songs like “Same Old Story” would be almost exactly the same delivered in English – they’d just lack Capleton’s naturally melodic accent. “Inflation gettin high, economical worries/so me tell the ghetto youth dem don’t get discouraged.” That’s the vibe you get from most of Capleton’s music – he’s always seeking to accentuate the positive and downplay the negative, preferring hope over cynicism and looking forward to a brighter tomorrow. He’s not afraid to pour out his heart over tracks like “I’m in Love,” recorded at Tuff Gong with a full in-studio band creating smooth island melodies so he can confess (and damn near scream) his undying affection for a beautiful lady.

Even Capleton songs which seem to have a violent title like “Global War” are not a call to take up arms, but rather a warning that “world crisis gonna lead to Armageddeon.” Capleton takes the U.S.A. and England to task directly as the leaders and nuclear powers who fail to do what’s necessary to stem the crisis he sees coming, calling for “better judgment” from all parties worldwide. Throughout the 15 song album, Capleton is offering the love of Jah and the “Blessing” of Selassie I to his listeners, offering music that you could either dance or meditate (or puff de herb) to. Even though Jamaica still has seriously difficult problems to overcome in terms of poverty, violence and the drug trade in the years to come, Capleton’s message is one of redemption through music and spirituality. His bearded visage peers out through the fires of his album cover, but as Capleton says himself he believes in a “purifying fire” which will remove sin and bring healing. “I-Ternal Fire” achieves those goals.