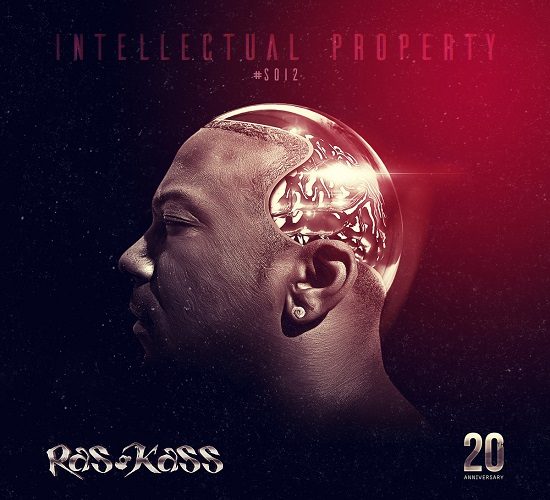 Approaching a 26-track Ras Kass album isn’t the most mouth-watering prospect for a part-time writer with minimal free time and a hundred records to listen to. But I continue to keep up to date with ol’ Razzy Kazzy, because he’s recently found some solid production to complement his lyrical delivery. After the Apollo Brown collaboration (“Blasphemy“) and the Semi Hendrix project last year (“Breakfast at Banksy’s“), Ras Kass has decided to mark the 20th anniversary of his overlooked debut “Soul on Ice” – a record that’s known more nowadays for being one of the most expensive CDs (and vinyl) in hip-hop – with a semi-sequel. Unfortunately, “Intellectual Property: SOI2” should in no way be compared to the original.

Ras Kass’ latest record feels too much like the mediocre projects he released in the late 2000s – the likes of “A.D.I.D.A.S.” and the more recent “Barmageddon”. A mediocre Ras Kass record is still not to be sniffed at, but after two good Ras Kass records, it’s inevitably a disappointment, particularly with that ‘Soul On Ice 2’ in the title.

“Intellectual Property” starts off well, with “And Then” being a five minute summary of Ras’ career post-“Soul On Ice”, drawing some light on the era where his shelved record “Van Gogh” didn’t see, well, light. KRS-One delivers a good verse on “Bardom” but it’s difficult to take anything he says too seriously given his stance on the allegations surrounding Afrika Bambaataa. The dude was my favourite emcee for many a year, but it hurts to hear him drop something decent with that cloud above his head. I imagine this track was recorded before KRS’ responses. There’s definitely a reliance on guests from the 1990s, with O.C., Bumpy Knuckles, Onyx and RZA all providing a nice throwback for fans. Well, the RZA contribution is a waste of his talents in all honesty, being nothing more than an extended shoutout to Ras Kass.

While the overall cohesion of “Intellectual Property” is bumpier than Freddie Foxxx’s knuckles, it’s not as if Ras hasn’t tried. The collaborations are remarkably entertaining in fact, with an interesting Sean Price feature on “Paypal the Feature” that uses an 8-bar verse as the hook. It feels like a nice dedication to Sean, a year after his death. “Kanye Moment” is completely different, with Ras Kass poking fun at Kanye by having a bit of fun with a C Dash beat that is nothing like you’d expect him to rap over. The best thing about it is some of Ras’ lines are his most potent – calling out “slavery rap, it makes me ashamed to be black”. Ras goes at stutter rap on “Downward Spiral”, an insane collaboration with Bumpy Knuckles and Onyx. Sticky Fingaz delivers a typically charismatic 8-bar verse (each line is hilarious):

Some of my favourite Ras Kass verses are from Xzibit’s first two albums, and the tracks that feature guest emcees do see Ras on cruise control. Outdone by O.C. on “Reverse Engineering”, who even brings the “Time’s Up” beat back at one point during his verse, Ras Kass’ latest record may feel like a bloated mixtape at times, but the good ends up outweighing the bad. Therefore, “Intellectual Property: SOI2” is a better piece of Hip-Hop than the likes of “Barmageddon 2.0” and “Institutionalized 2”, it’s just a shame that it is about ten tracks too many.