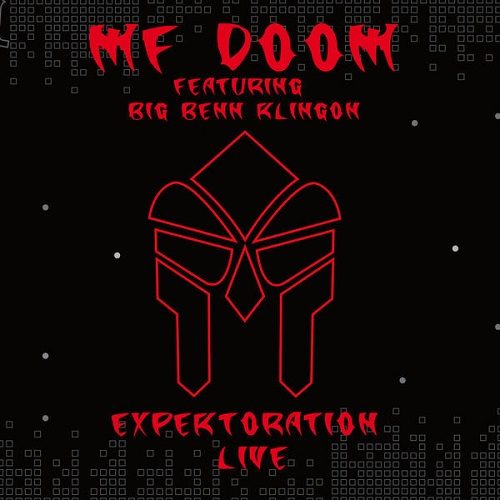 “Expectoration, or spitting, is a common side effect of speaking Klingon. Until you are used to it, keep a napkin or handkerchief nearby. Now, are you ready? Pay attention!” – Michael Dorn as Lt. Commander Worf

By most standards this might be considered the nerdiest introduction to a rap album of all time, but for the “Dead Bent” rapper who insists that you use “ALL CAPS” when you spell his name, there’s almost no better way to begin a live CD. Daniel Dumile has worn many faces in his hip-hop career, but he’s still best known as the Metal Face Villain, whose exterior appearance was based off the Fantastic Four’s archenemy Dr. Doom and whose musical stylings were punctuated by audio clips of F4’s adventures. He’s also well known for his love of brew, having dedicated more than a few songs to his unquenchable thirst for ale, while occasionally seeming to be literally spitting his loquacious flows totally inebriated on record. Dumile has managed to walk the fine line between rap anti-hero and total alcoholic much more successfully than the late great Ol’ Dirty Bastard, to the point one ultimately has to assume his salivary slurred speech is a permanent affectation and not necessarily caused by excessive consumption.

Even though recent released such as “Born Like This” insist that he’s permanently dropped the Metal Face moniker and wants to be known simply as DOOM, it’s actually quite appropriate to bring it back for this album. Why? Because “Expektoration… Live” is a compilation of live rap performances Dumile did before dropping the initials from his name. The first half of the album is one long 30 minute track celebrating the release of his album “MM.. Food” back home in New York after a successful tour – one which also included a canned food drive to feed children who go to bed hungry at night. Dumile and his crew of cohorts including Big Benn Klingon rip through a selection of his hits from this and other albums, dipping into the Madlib produced “Madvillainy” to mix in songs like “Accordion” and “All Caps” side by side with raps like “Kon Karne” and “Beef Rapp.” It’s safe to say many rappers couldn’t pull off a short but intense Villain-est Hits set this well, and Dumile’s slurred tongue never trips over his own vocabulary no matter how quickly things are changed up. The crowd reacts enthusiastically to each track and DOOM gives them the energy back two fold in return, always a winning formula for a live album.

After a brief interlude where Lt. Commander Worf tells us that now might be a good time to “replenish your napkin supply” we return for a second set that’s approximately 20 minutes long and no less intense than the first one. This time Dumile focuses on songs from his cult classic album “Operation: Doomsday,” opening up the presentation to the ultra smooth notes of “Go With the Flow” and transitioning seamlessly into the titular track “Doomsday.” All of your DOOM favorites can be found here, like the Scooby Doo laced “Hey!” and the Bobbito laced “Rhymes Like Dimes.” By the end of the set Dumile and his crew of Monster Island cohorts stomp off the same way they stomped in, full of piss and vinegar and hardcore New York hip-hop, leaving brassy horns and a beatbox to echo in the building as you exit. Worf leaves us with these words: “Once you have their money, you never give it back.” True indeed God. For those who spend their dimes to hear an old school MF DOOM live show, they won’t be wanting it back anyway. This isn’t the album to introduce the uninitiated to his unique and often oddball style and flow, but long time fans will appreciate this slice of history as proof that Dumile really does rap his own concerts and doesn’t send out impostors under his famed Metal Face.