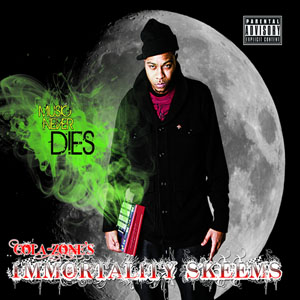 Cola-Zone is an MC/producer in his mid-twenties hailing from Fort Wayne, IN. Like all creators he would like to leave something behind that lasts, hatching “Immortality Skeems,” an album that’s been a few years in the making. Produced by Cola-Zone und Tomar ‘HQ’ Tyler with additional instrumentation (guitar, keys) from Rob Robinson, the release exemplifies the maverick spirit of local independent artists. On a larger scale, Zone was able to represent on the recent “Midwest Block Starz” compilation, his song “Optimus Grind” being one of the more creative contributions.

The album confirms the first impression. Naming himself after an angel called Kolazonta (The Chastiser), Cola-Zone’s music often recalls the bleak sci-fi soundscapes of Cannibal Ox’ indie classic “Cold Vein.” Appropriately enough, Vast Aire makes a cameo on “Trialz.” But Cola has no trouble going almost the entire distance by himself. As far as cautionary street songs go, “Your Advantage” is more remarkable than “Trialz,” because it looks at the gun problem from different angles, all over an entertainingly jazzy track. But the artist has more complex sound designs down pat as well, see “The Grave Is Empty,” which serves as the grand finale that underlines Zone’s ambitions. An underground piano loop and stuttering drums distinguish “Dat Noise,” where he stresses the bond between raps and beats as he argues, “Heat flamin’ out of MPC’s / If my beats weren’t hot I wouldn’t be an MC.” A staggering piano sets the pace for “Guidance,” which sees the rapper question and ultimately reaffirm his career choice:

“Which would you rather see:
A nigga that blow trees
compose beats and keep his peace?
Yeah, you would think
Or a nigga coked up
robbin’ old bitches comin’ out of Kroger’s
Like, ‘Damn, look what happened to Cola'”

“Optimus Grind” still grabs my attention with its industrial but melodic bassline and busy chimes. The music may be unusual, but the lyrical content is anything but as Cola’s pursuit of happiness is purely pecuniary:

“If money didn’t talk, these women’d lose they hearin’
If Bentleys didn’t cost, what would caked up niggas be wearin’?
Floss in ’87 Civics gettin’ the flyest bitches?
Sound like the script to a motion picture
If I directed bet you’d buy a ticket
Back to the message of the lec’
I use the loot, riches chasin’ bitches
Now I’m on the grind, rarely lose women makin’ digits
Hoes on to the green like crickets”

Throughout “Immortality Skeems” Cola peppers trivial observations and average subject matter with challenging beats and unusual imagery. Fancying himself as a cinematic musician, he early on (in the opening “Overture”) engages in movie metaphors:

“You can kill Zone but Skeems’ll never rot
I build dreams with ink in a widescreen letterbox
Here’s a independent flick for hip-hop, watch
We Sundance on these niggas for sayin’ they hot
cause they thizzin’ off that shit you pop
[…]
That’s so pathetic, y’all need directions
May this help you find the exit
The sound is epic, it’ll make you sit through the credits
You realize this is more than a record
But merely nothin’ less than 14 tracks of my life embedded
flashin’ right before resurrected”

A considerable part of the listening experience here is deciphering what he’s saying. That’s both a compliment and a critique because Cola-Zone doesn’t just use special phrasings, he also hasn’t the most authorative diction. This being said, rap like this doesn’t always have to make sense to the simple minded, and sometimes a compelling hook like the one for “Violet Rayz” (“I wish I wasn’t blind to the violet rays / maybe then I’d see the sunshine on cloudy days”) and an emotive beat is all it takes to make sense of a song. One of the album’s more captivating offerings is “Fear and Loathing,” which imagines “Hunther S. Thompson as a black man” and even seeks inspiration in L.L. Cool J’s trippy “Pink Cookies in a Plastic Bag.”

When Cola concludes, “I’m too witty to be livin’ this vain / which explains why I’m loathin’ in Fort Wayne,” you get the feeling that as an artist he isn’t completely at home in Indiana. While he shows confidence in his ability to “blow and break the odds” in the album’s first track, he stresses in the second one, “I need dough some time before this hip-hop shit get foreclosed.” “Incline” is in fact where he most thoroughly deals with his role in hip-hop:

“I’m like, somethin’ gotta give
Like, how is hip-hop so competitive
when everybody rap the same, sound like him?
And it’s gettin’ repetitive when I hear where I live
Cause Fort Wayne’s a small confinement
So what that mean? I gotta think small-minded?
I’m a 100 blocks outside this jack-in-the-box
You’re a joke, nigga, cause I’m laughin’ when your shit pop”

For any local rap scene, an album like “Immortality Skeems” is bound to be a powerful statement. For the rest of the world it’s a release worth your while if you’re into slightly poetic and abstract, traditional hip-hop grounded in real life. To be even more unique, it would have been necessary for Zone and his conspirators to get even more thrills out of the obscure samples (vocal and otherwise) and to make the final product more refined. Otherwise it’s a promising project. Let’s hope it isn’t really his last like he suggests. For now it’s available at all major digital stores.