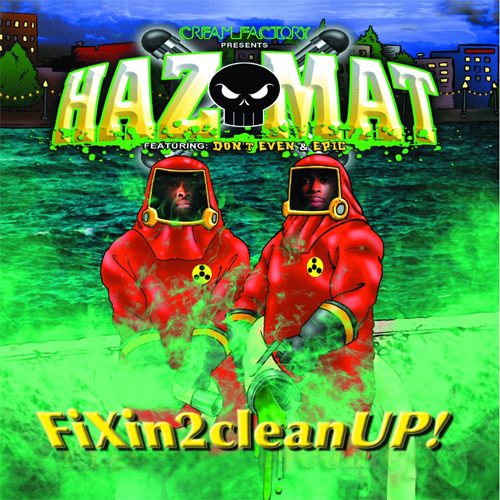 I am a hometown boy. I was born and raised in Northern Cali and I make sure to put it on my back wherever I go. So naturally, when I see other hometown heroes hustlin’, I follow them a little more religiously than I would others. For instance, I forget that I hate anything from Green Bay when it comes to Aaron Rodgers, who was raised in Chico and learned his craft at Cal. The thought that he could have been quarterbackin’ in the red and gold of the 49ers gives me ulcers, but I digress.

So when I listened to Haz-Mat’s “FiXin2cleanUP!” I tried to lay away all of my hometown leanings and give you an objective review based on my knowledge of what makes a good album. Being completely honest, I would find a decent listen if you’re a fan of the scene, but it’s not the best introductory album if you know nothing about the Bay, especially its street music.

Haz-Mat combines that new Bay slap with some of that old Bay mob swagger, which I find refreshing given some of the new artists we’ve produced lately. The problem with this release is consistency. When Haz-Mat stays true to its Bay roots, they tend to make good songs. When they try to go for some crossover appeal with more candy-coated songs, they don’t pull it off quite right.

For instance, when Don’t Even and Epic team up with LT on “They Don’t Really Want That,” they bring the chip on the shoulder that almost every Bay Area rapper carries with them on their releases. Producer e2music sets the table with a serviceable track that assaults the listener with hi-tempo horns and an aggressive melody. Epic brings the Town Biz’ with the first verse:

“They bout to get that, guarantee it cracks
Look now everybody is Hyphy I say The Town’s back
So you best handcuff your wifey or she will be snatched
Swagger got’em hooked and the game is known to be cold fact
And they won’t like
Think how they gon act
Epic & Don’t Even now breathing, HazMat has gone Plat!”

Epic has a unique nasal way of spittin’ that meshes well with the hard hitting beat. He stays within his boundaries and rides the beat without trying to do too much with it. Don’t Even has a flow that reminds me of Gizmo from The Federation, but without the over hyper delivery. He spits the verse well, but he ends up repeating his rhymes way too often for me to let it slide. For instance:

“But ask me if I care man and I say I don’t black
Cause they didn’t believe that we was gonna strike back
But now that we did what you think about that black
Oh by the way could I get the platinum plaque back!”

He delivers it right, but some diversity with the schemes would strengthen his overall flow. It’s still a banger to listen to, but the track preceding it, “Who Gotcha Jumpin'” feels like it was based on buzzwords like “crossover appeal” and “catchy hook.” e2music deviates from the Bay Area mob music he can do and starts getting into some club shit. The problem is that it’s not packaged correct, and you can really tell that Don’t Even and Epic are a little out of their element when it comes to making fools dance. The beat got a chaotic rhythm and some reggae strings that feel tossed together in some drunken stupor. It halts and jags at Don’t Even and Epic’s flow, and its pulled together by a hook that gets old faster than a YouTube celebrity.

Overall, it’s a nice addition to the Bay Area music catalog, but it’s definitely not something I’d recommend to someone who’s alien to the scene. It panders to everything I love about Bay Area music, but it’s not the best I’ve seen, and it has no “crossover appeal.” Diehard Baydestrians will like this album, but the average listen might need to find something easier to swallow.