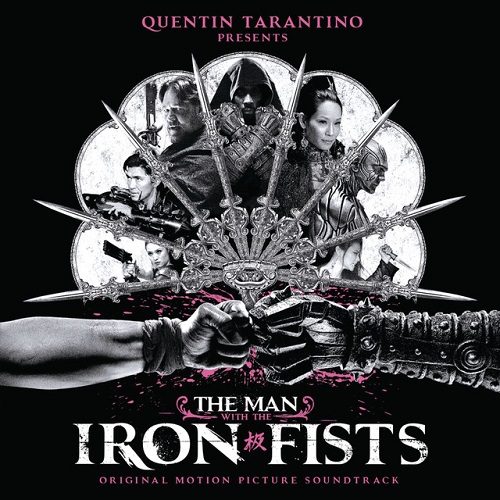 OST :: The Man With the Iron Fists

Unfortunately this Travis Barker song is not part of “The Man With the Iron Fists” soundtrack, despite being featured prominently in the advertising for the movie. It’s not even a bonus track. That’s frustrating given that RZA is heavily involved in all aspects this movie, including writing and directing it, and releasing the OST on his own Soul Temple imprint. From a corporate standpoint this shouldn’t have been hard to work out – Barker’s group (Blink-182) is signed to DGC, which is an imprint of Interscope, which is owned by Universal Records. Coincidentally this soundtrack for the Soul Temple imprint is distributed under the Universal Records umbrella. We’ve got a classic “left hand doesn’t know what the right is doing” situation here. Regardless things get out to a hot start with The Black Keys and RZA on “The Baddest Man Alive,” a track also co-produced by said same.

RZA: “Not bad meaning bad, but I’m bad meaning good
Say my name three times, and you knock on wood
Candyman hooks, I’ll terrorize your hood
Flashing macs on a cop the way a gangster should
I snatch food from the mouth of a tiger
Take a gasoline bath, then I’ll walk through fire
Bear hug a grizzly, suck milk from her titty
Take the sergeant hat from his head and use it for a Frisbee
Spit in a crocodile’s face
Have a menage a trois with two female apes
Then sleep in the barrel of butcher knives
I drink honey, straight from the beehive”

Wu-Tang Clan familia play a strong part in this soundtrack, which is exactly what you’d expect when one of the Wu’s founders is in charge. Even when there’s not obviously a Wu member on the song, such as with Kanye West’s “White Dress,” a quick look behind the scenes reveals that RZA splits the production credit with Mr. West. One can hardly complain given the song is one of West’s better efforts of late, putting aside his absurdly annoying champagne flossing for a well narrated tale.

West: “We was on fire, but they blew our flame
Ain’t no denyin baby, you have changed
Cause now your high heels clickin, your lip gloss glisten
Your hips starts switchin, you pissed off trippin
Cause even when we kissin, baby girl feel different
Friends all diss ’em like, NO HE DIDN’T
NO HE DIDN’T, is you talking about Kitten?
Is that bitch still strippin tryin to get a pair of Christians?
I swear to God that they got you goin crazy
But you play it off and say ‘How’s work baby?'”

The soundtrack’s songs work in dialogue from the movie, such as Talib Kweli’s smoking “Get Your Way (Sex Is a Weapon)” featuring Res. And if you’re looking for a revival of the traditional Wu-Tang Clan sound in group form, “Rivers of Blood” featuring Kool G. Rap and “Six Directions of Boxing” are as close to it as we’ll get in this decade – unless RZA can lock everybody in the studio long enough to finish an album together. For better or worse when you do an album that includes the WHOLE Wu familia though and not just the original Clan, you get branches of the tree like Killa Sin on “The Archer.” It’s not that Frank Dukes made a bad track or that Sin is a bad emcee, but his “these niggaz like March of Dimes rappers” punchlines don’t take an average track and elevate it or vice versa. And if you’re the hip-hop head who’s not into R&B, songs like Corinne Bailey Rae’s “Chains” and The Revelations “I Forgot to Be Your Lover” aren’t going to do anything for you.

Thankfully the majority of this album is a throwback to the 1990’s, when it felt like every soundtrack for a movie starring Ice-T or a member of the Wayans family was dominated by hip-hop. These days if a rap song makes a movie’s soundtrack, it’s almost an afterthought, as though they have to acknowledge some part of their audience are rap heads even though they’d rather not do so. Of course the downside of those soundtracks was that labels would force songs by relatively unknown artists on you for the exposure. I look back at “The Corruptor” and wonder what good it really did Caffeine, Jane Blaze or Truck Turner – and the answer is “not much.” At least most of the artists here are long-established in the U.S. with the exception of Frances Yip, who turns in the oriental flavor this martial arts soundtrack needed in a big way on “Green Is the Mountain.” At times it feels like a Wu-Tang compilation more than an OST, but it still works. It’s just a shame the song that embodies this movie to the point it was in every commercial wasn’t included.