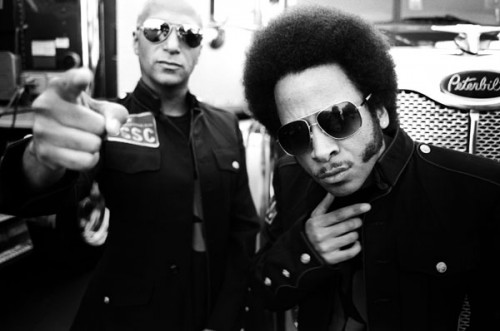 , and the band’s headlining gig on the Rock the Bells tour, Boots Riley sat down with us at RapReviews to tell us about what’s been going on with him musically, as well as which major social issue he’d address first if he was in office, and why we all may have received a call from him in the past, we just didn’t realize it and may have hung up on him.

, and you were one of the headliners for Rock the Bells. Let’s start with the album. Were you looking to make a full length, but wanted to get something out in time for Rock the Bells, or was this planned as an EP all along?

Boots Riley: We don’t really plan shit {*laughs*}. It didn’t happen with Rock the Bells, we just wanted to put something out right now.

AB: In what ways do you see The Ghetto Blaster EP

continuing what you and Tom Morello started with your self titled debut last year?

BR: I think we’ve gelled together more. On the last album Tom did the music by overdubbing the bass and guitar parts, this time we did it with the full band that we’ve been touring with for the last year. We did it all in small studios. The production wasn’t as polished, so it kinda has a rougher sound, which works a lot better for us.

AB: How do you think it would sound coming out of a ghetto blaster?

BR: I think there would be definitely a lot of bass and drums. It’s definitely rock, though. It’s not what I would be used to coming out of a ghetto blaster.

AB: You say you consider it rock, but you’re still rhyming on it.

BR: Yes. I’m talking about the music. I’m rapping on it, but I’m from Oakland, so if it’s got a guitar in it, people are gonna think it’s rock. That’s where the line is drawn.

AB: And as noted earlier you were one of the headliners for Rock the Bells last month. What kind of live show do you guys put on?

BR: That’s one of the things that we came together to do, kill the crowd. Both Tom and I, we’re not up there shoe gazing. I’m not up there just saying my lyrics. We’re bringing full energy. We go wild. By the third song every band member is covered in sweat from head to toe. After every show we are burned out, tired, breathing hard. We’re not up there just to look pretty. The shit is crazy.

AB: So people should be warned that if they wanna give you dap after a show they might want to bring a towel.

BR: Yes, exactly. We have never not killed the crowd. What I mean is, people with their hands in the air, jumping up and down, craziness going on, and people wondering what hit em. While they know all the words to the songs of whoever comes after us, what they will remember about us is the energy we put out there.

BR: We’ll have a new album out by the end of the year and it’s gonna be the soundtrack to a movie that I’m almost done writing that I’ll play the lead character in. The movie is a dark comedy with magical realism inspired by my time as a telemarketer. It’s called Sorry to Bother You.

AB: That’s something you don’t hear rhymed about a lot and it’s certainly not an easy gig.

BR: What’s funny is the place that I worked out, I worked there with Gift of Gab.

AB: So at any point in time I might have been talking to you or Gift of Gab?

BR: Yeah, he was probably the one who was talking so fast you couldn’t understand what he was saying.

AB: Are you at liberty to say who you were actually working for at that point?

BR: In the movie they’re selling products, but what I actually worked for was tele-fundraising, doing fundraising over the phone for non-profit groups, but it still was a lot of bullshit. Before that I also did stuff with the news, the San Francisco Chronicle, the Examiner. From the time I was 11 I was one of those kids that would show up at your door, knock on your door with tears in my eyes saying I might not be able to go to Disneyland because this is my last house and if I don’t sell this subscription I don’t get to go to Disneyland. That sort of thing. It was using my creativity for evil, basically.

AB: You’ve since moved on to use it for good.

BR: Yeah. Some would say.

AB: Moving from music to politics, we have a lot of problems going on right now. If you were in office, which issues would you want to address first?

BR: I’d want to address the issue of the wealth gap, because I think that would make the other problems easier to solve. Second, I’d work on pulling the troops immediately out of Afghanistan and Iraq. And thirdly… I could go down the list, so I’ma leave it there.

AB: How can we address the wealth gap?

BR: How you do that is you, and I wouldn’t do that as president because the president isn’t the person that would solve those problems. However, in the ghetto you have businesses that are making millions and billions of dollars that can afford to pay more. Whether you’re talking about McDonalds or Walmart, or any of those places, they can all afford to pay their workers $30 an hour and still make millions of dollars. Why won’t they do that? Because we won’t make them do that, and by “we” I mean the people that work there and the people that are around. They can do it, but they won’t by themselves.

BR: Which will then create other opportunities for employment. That’s something pretty quick that will happen. Just in those two places, the fast food industry and retail, if people were paid, let’s not even say $30 an hour, but $20 an hour. You would have a much smaller wealth gap, so much smaller.

AB: And people lining up to work at McDonalds.

BR: But that’s not gonna happen. There was one McDonalds, and it was in the early 90’s, I don’t know what happened to it. There was a small article that I clipped out and I carried it around with me. There was one McDonalds in Ohio that had a successful strike because I guess the people that worked there were families of militant union workers. They did a strike where they picketed in front and physically kept any scabs from coming in. That’s the only way to have a successful strike. There was a police fight, but the striking workers won because they had so much support. They won and at the time they got $18 an hour, which was amazing. That seemed like it should have been the biggest news in the world. It was just in this one local paper. Ask why didn’t that come up anywhere else. Even something attacking it. You’d think that the right wing newspapers would attack this as being an attack on free enterprise.

AB: Maybe they just didn’t want anyone realizing they had that kind of power. Continuing with politics, and power, do you think a third party ever become powerful enough to be a major force in this country?

BR: Yes, if they get corporate backing and do the bidding of the right lobbyists, but then will it really be a third party? {*laughs*} There are slight differentiations between the Democratic party and the Republican party, but the differences on the scale of what could be are so slight, even compared to other capitalist countries. Obama, in the bailouts that he signed up for, he could have easily reversed people’s foreclosures, and that would have done just as much of a boost to the economy as bailing out the banks. And usually when banks get a bailout like this the US is able to say we gave you this bailout so we don’t owe this much on the national debt anymore. Obama didn’t do any of that. They all have different ways of working for the same. They’re working for the same interests, they just have different strategies and they disagree on those strategies on how to best serve the capitalist class.

AB: Finally, after all the seriousness of this interview, what makes Boots Riley crack the F up?

BR: Eastbound & Down and Flight of the Conchords.