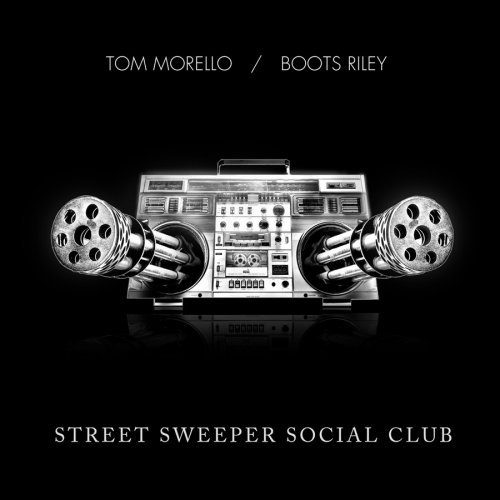 The announcement of this album hit me like a high velocity brick to the forehead during a riot. I was immediately dumbfounded as my ears rang and head ached with the possibilities that ensued. Tom Morello from Rage Against the Machine. Boots Riley from The Coup. This union is so obvious it’s stunning that it didn’t happen BEFORE. There may not be two artists whose music is more closely associated with political activism and social justice than the tandem making up Street Sweeper Social Club. Dictators and phony democracies alike beware, because “Somewhere in the World It’s Midnight” and these revolutionaries will not be televised.

The Street Sweepers are fighting three uphill battles in getting this war broadcast to the masses. Ironically what might have been perceived as the hardest battle turned out to be the easiest – getting mainstream media exposure. MySpace streamed the entire album for free, Late Night with Jimmy Fallon put them on TV, and print media from Rolling Stone to Spin all gave them ink. The publicity shatters the urban myth that you can’t make music with a message and get respect any more – the Street Sweepers have gotten plenty of it. The more difficult wars lie ahead. Reluctant fans of The Coup who expect banging hip-hop beats and Pam the Funkstress in control may not want to get down with the raging bass and rock guitar assault. Reluctant fans of Machine may wonder why Tom Morello decided to groove with Boots Riley instead of returning to the equally fiery rhethoric of Zack de la Rocha. Both cult followings eye their counterparts warily here, not nearly as sure that this combo is a good idea. They may want to take those figurative bricks I spoke of earlier and get quite literal.

“Well I got a new kind of squaredance rap
Gon’ talk smack, flash my gat
I’m fin’ to spit and hold my dick
and heat shit up like a thermostat
Grab your partner by the chaps
Give your partner a pimpslap
to symbolize, the ghetto trap
Step to the right, give three claps!”

“Promenade” is a prototypical Boots rap, combining a cutting social commentary with just enough humor to make it palateable, creating the crunkest country jamboree ever seen. “Everybody throw them bows/right upside your partner’s nose/By now you’ve got a bloody nose/Crabs in the barrel so the story goes.” The beat is much less typical for Boots, but Morello builds up the rock backdrop slowly and deliberately to warm up even the most negative naysayers until the background vocals of Steve Perry come in to ooh and coo. Stanton Moore’s percussion keeps things pulsing until a tambourine rattling like a snake ends the track at 2:30. “Fight! Smash! Win!” is far less subtle. Morello’s slapping bass is prototypical Rage from the very start, and Boots picks up the pace on his lyrical delivery to match the frantic musical backdrop. “Excuse me, I never learned to behave/My great great granny was a Carolina slave/She whispers in my ear sayin SPARK THE BLAZE.” Morello and Riley take her advice to the hilt.

As someone who has followed many variations of Rage over the years, including their entire span as band called Audioslave fronted by Chris Cornell instead of Zach, I’m more prone than some fellow hip-hop critics to feel the vibe here. “100 Little Curses” is the kind of headbanging hip-hop not seen since Anthrax and Public Enemy decided to “Bring the Noise,” but instead of a one shot these Street Sweepers inject eleven doses of Morello’s riffs and Riley’s rhymes. There’s nothing toned down about the performances of either one, and the latter in particular seems motivated by this new format, pledging on “The Oath” to “get their foot off my neck/instead, I shall demand my respect […] alright, motherfuckers?” Riley injects the concrete jungle and urban environment around him with personality all its own, making you think the ACTUAL streets are going to revolt and not just the people on them. It’s heady stuff, and Morello’s sonic assault is the engine that brings it thundering at you with more horsepower than a steamroller. “The Squeeze” is an apt song title as a result, with friends and foes alike warned to get with them or get crushed between the rock and the roll, “cause they vote with they guns/you know they vote with they guns!”

The question remains whether or not Rage or Coup fans will take umbrage to this new social club of likeminded activism. Objectively it must be said there are some problems with the presentation at times. Anyone who ever argued that Rage Against the Machine took the last word of their name too seriously, cranking out repetitive and noisy riffs lacking emotion will not be pacified by Morello striking out on his own. He’s the clear heart and soul of his group and brings his heavy as a Chevy rock grind with him to the Club. In fact without the lyrical “fuck you” that Riley injects it could at times become monotonous, and at times it does anyway – “Megablast” just makes me want to hear the P.E. track of the same name instead. On the whole it works more often than not though, as Morello and Riley have a genuine and unforced chemistry. Morello is already used to rhymes being laid down on his projects so some might accuse Boots Riley of simply being an interchangeable piece in a Rage puzzle, but these Street Sweepers have an agenda that’s far easier to follow and swallow than the often metaphorically cryptic lyrics of Zack de la Rocha. Not everyone is going to join the Club, but those who wander through their front door have the potential to be pleasantly surprised.