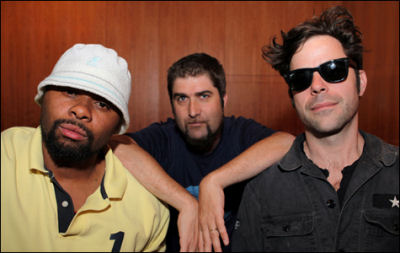 . The Motion Man collaboration with the Rondo Brothers (pictured L to R) just recently hit the streets, and RapReviews managed to catch up with the everywhere man for a few minutes when his travels happened to cross paths with ours. During our conversation Motion Man told us a little bit about working with the Rondo Brothers, the positive qualities of being a foreign globester, and why he has no qualms about linking up with people for projects.

Adam Bernard: You have a long history in music that dates back over twenty years. Having seen and done quite a lot, what qualities does a project have to have to make you excited to want to do it?

Motion Man: If the beats are right, I’m good. Writing is fun, so if I like the tracks I can create. Pretty simple for me! A swig of liquor gets me in the mood and I start writing down what comes to me!

AB: What excited you most about the prospect of doing your latest collaboration, The Foreign Globester

, with the Rondo Brothers?

MM: They have a lot of different sounds and levels to their music. They’re extremely creative, and it’s cool to be kept on edge. They’re very easy to get along with, too. Egos get checked at door. Also, I like them as people. We can hang out and have it be non-business related. I think we’ve built a relationship where we’ll always look out for each other. Even if we weren’t working on a project and I ran into some people I know that needed their services I would direct them in their direction. And these cats have jammed with some people, don’t get it twisted! {*laughs*}

AB: Who is this Foreign Globester character you play? You bill him as an underground hip-hop, world traveling, superhero of sorts, but what does that encompass? Why should we want to invite The Foreign Globester into our homes and possibly offer him a hot meal?

MM: If you peep the Globester album you’ll hear many sorts of different sounds and genre of music across the world that we’ve been influenced by, but with our own twist. It’s an iPod Shuffle that you don’t have to put on shuffle. The Foreign Globester wouldn’t eat at your house, though. Plus he’s always rocking a “scramble suit.”

AB: Which aspects of The Foreign Globester

do see in yourself, whichdo you aspire to have, and which are you really happy to have nothing to do with?

MM: When you move through the world foreign to everyone you start adapting and learning to blend in, showing out only when necessary. You enjoy the scenery as a fisherman walking the streets, and shop with the natives as a non-tourist. You look like you have a reason to be there and you’re not a target! They aren’t all, but they’re a few of the qualities needed for survival in a world that gave birth to you that no longer recognizes you as its child.

AB: You inject a lot of humor into your work, which is obvious to anyone who listens to the escapades of The Foreign Globester. How difficult is it to be humorous in hip-hop, to make a joke without turning into one?

MM: Well, I’ve always just been myself. I usually write things I can sit back and laugh at, but I’m not a comedian, and I’m not really sure what’s funny to other people. I just come out with what’s funny to me.

AB: I know a lot of artists prefer to do things by themselves because they don’t have to worry about anyone else’s opinion, but you do a lot of collaborations. What about the collaborative process do you enjoy and what do you feel you get out of it?

MM: I like working and if I run into an artist and I like what they do, and they like what I’m doing, it’s cool to see what you can come up with. I learn a lot from other artists. I’m not that uptight to where I have to have total creative control on a song. I can always agree to disagree and if it doesn’t work then so be it. That’s just never happened

AB: What do you think are the greatest changes you’ve made, both musically, and in life in general, since you first became a name in hip-hop?

MM: Well, I’m older now and I’m a lot more open to a larger variety of sounds in music. That’s why now you may hear me on something you probably wouldn’t expect, but that’s what I want now, where as before I wanted mostly ill hardcore hip-hop beats. This isn’t something new, though, this transformation has been happening to me for about 15 years now.

AB: Finally, tell me one thing you feel you haven’t done in music that you’re still aiming to do.