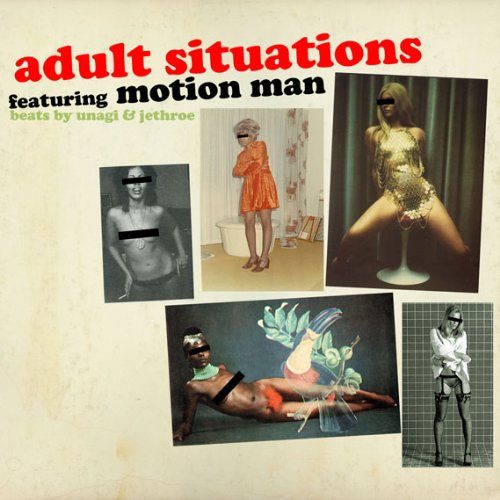 Paul Laster is a man in motion. In fact he may actually be moving too fast for his hip-hop career. Despite his membership in the critically acclaimed group Masters of Illusion and a well regarded solo album where he did things his OWN way, “Pablito’s Way,” Motion Man doesn’t seem to have achieved the notoriety of his oft-times collaborator Kool Keith. Previous writers have noted a great deal of similarity between the two, but the comparison falls apart given that Mr. Thornton is regarded as an eccentric hip-hop legend while Mr. Laster is barely regarded at all. That’s unfortunate really – he may not have Keith’s reputation nor Keith’s almost incomprehensibly large catalogue of releases but the few he does are invariably high quality. Keith’s flights of fancy lead him to artistic brilliance and failure in equal measure, while Motion Man keeps a tighter reign on his impulses and still manages to deliver creative solo CD’s.

“Adult Situations” continues the trend of Motion Man making albums from his own unique lyrical perspective while maintaining an overall quality to the finished product. As you no doubt surmised by now from the title and the cover artwork, this is an album about sex, and this draws another comparison to friend Kool Keith. While a Keith Thornton album about sex would usually involve him fetishizing giraffes or paying street whores to model for his private photos (between bouts of smearing feces on the wall) a Motion Man sex album involves SEX YOU CAN RELATE TO. Sure it’s funny and entertaining to take a walk inside the kinky mind of Kool Keith, but the majority of Keith’s fans are not going to the petting zoo to get their groove on any time soon. Motion Man on the other hand makes it entirely clear on a dozen different episodes/escapades that he’s cut from the Too $hort cloth. He’s speedier and more lyrical than Mr. Shaw, but at the end of the day they both want to lay down a rap and then lay a woman down in bed. The theme is clear right from the star on “Pouring You Mo Champagne”:

“Sick spitter, no pitter patter of feet
Stroke with her, if we get there, the latex’ll cover me
Over interject in your world
Ejaculatin make sure your toes curl, pourin you mo’ champagne
Look upon me young mami, I’m Kawasaki
Let the good times roll with speed, I feel you roll, what?
A lot of conversation your butt, got me stuck
You got the elegant stuff, pourin you mo’ champagne!”

Samples of Kool G. Rap, Nas and CL Smooth in the chorus complete the elegant beat produced by Jethro & Unagi. This is a high class way of getting ass. A few songs like “High School Reunion” and “Smile” feature guest star Lyrical C, who can hang with Motion Man but certainly doesn’t present any danger of outshining the main Man’s flow. He’s got the mack rap of a stone cold pimp without the high pitched lyrical delivery of a Suga Free, and shows how his suave can get women in bed on track after track. He may have said “You’re the Woman” to a hundred different girls, but each one undoubtedly thought SHE was the only one in Motion Man’s life:

“She said I’m cute, the most exotic in place
She took her tongue, connectin the dots on my freckled up face
I was astonished, oh how I over-accomplished
Perspirating over her build, anxiety acts, you’re too intense
Quit worrying, over her innocence
Yeah she kinky with it, freaky with it, luxurious, her aura immense
[…] Her legs are long, no Downy on the top of her arms
She wrap her hand, nicely rounded like the stem of a bong
I must admit, kinky’s ultimate work
Handicapped bathroom stall, I wanted to jerk
I’m not embarrassed, I don’t mind breakin off cash
Whenever you throw it down on a player, I’ll dip in my stash”