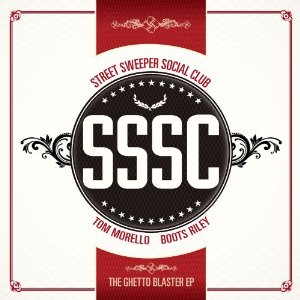 In case you missed the Street Sweeper Social Club phenomenon last summer, here’s a brief explanation: Boots Riley from The Coup and Tom Morello from Rage Against the Machine decided to form a supergroup to express their musical and political frustration. As one might have expected from the two, their music managed to both inspire and outrage audiences, and their services were soon in demand at rock and rap festivals alike eager to cash in on the sound. It’s not as though rap and rock collaborations are really anything new (we’re going on a fourth decade of the shit now) but Boots has been called everything from socialist to a commie by right-wing conservatives, who have been no less vitriolic in their condemnation of Morello’s group RATM fam over the years.

As a result of their extensive touring and performing, SSSC have added two new cover songs to their repertoire which can be heard on “The Ghetto Blaster EP.” Dare I say it? No one on the corner has swagger like Boots. That’s right, you’ll hear their take on M.I.A.’s “Paper Planes” on this EP, and I quite like it. I always enjoyed the original version, but the way Boots snarls the words “AND TAKE YOUR MONEY” gives it a whole new menacing edge, particular as paired with Morello’s energetically aggressive guitar playing. It gives one the feeling the Feds are literally coming to kick down your door and take your hard earned wages at gunpoint, which is undoubtedly the feel Boots wanted to convey. Their take on “Mama Said Knock You Out” may be even more intriguing though. While LL Cool J loyalists may consider remaking this hip-hop classic sacrilege, Boots pays tribute to Cool James in his delivery with the emphasis he puts on phrases, practically morphing into James Todd Smith in the process – only to shapeshift back to The Coup frontman and scream “I CAME BACK WITH A FUNKY RHYME.” It’s the shit y’all. The original songs are worthy of the SSSC standard though, particularly the title track:

The downside of any funky EP is usually that is just that – an EP. “Ghetto Blaster” is a tantalizing look at a group that many thought was a one time fad or union that is clearly relishing the attention they received and becoming more bold and daring as they continue to work together over the long haul. Those who wrote off the SSSC phenomenon may now want to reconsider as this deadly duo will be around for some time.