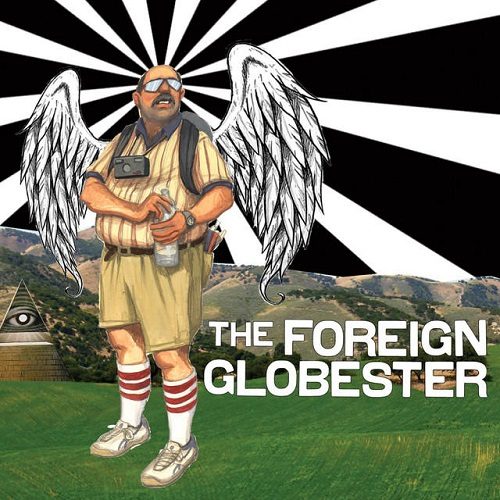 What happens when you collide and combine the creative chaos behind the Rondo Brothers (producers Jim Greer and Brandon Arnovick) with the mental energies of Motion Man? The answer is “The Foreign Globester.” It’s the latest greatest hip-hop get-together in the industry, only there’s a little twist – the Rondo Brothers probably aren’t known best for their work in hip-hop. Sure they opened for Prince Paul on his Handsome Boy Modeling School tour, but they’ve spent just as much if not more time jamming with The Rapture and The Cure. They got their start as two relatively unknown but like-minded producers in San Francisco, got the chance to work with Dan the Automator on a jam band project, and since then have branched out far beyond the hip-hop genre – while keeping one foot in the pool via friendships with nerdcore artists like Beefy T and MC Lars.

At first glance it doesn’t seem a natural fit for the Rondo Brothers to do a cannonball straight into hip-hop’s deep waters, especially given their partner Motion Man is a long time underground favorite still struggling to get his mainstream recognition from listeners and critics worldwide. As it turns out though Motion Man’s role is more the “silent partner,” offering direction to the Brothers and providing narration on “The Foreign Globester” where and when it’s required. On the back cover of the CD no songs credit him at all even though his narrator role does get mentioned below the tracklisting and songs without billed guest stars tend to feature his work.

Speaking of guest stars though, the list of contributors to this album could definitely be called eclectic and (let’s be fair about this) completely unknown to today’s skinny jean wearing Soulja Boy blasting hip-hop crowd. I’m not opposed to the high-pitched, comic book obsessed, internet G33K culture of rappers like MC Lars or his brother from another mother mc chris in any way – I just recognize it for the niche genre it is. The guest rappers here fit comfortably into that niche while being far less notable for their accomplishments. Poach Stevens brags about having “spinners on his spaceship” on “Rockership Flossin” – I’ll give him a thumbs in the middle for being mildly amusing. KrazyGlue is less satisfying on “Legend Has It,” sounding like a poor white hybrid of Motion Man and Kool Keith (no offense KG I just call it how I hear it). At least the production on this track is much more lush making it more listenable overall. The place where beats, rhyme and talent best link up on this CD is the grand finale “Cult Leader,” where Beefy T and MC Lars find inspiration in the topic of those who mesmerize masses:

“Shoko Asahara was a Japanese icon
He claimed he could levitate – the people said RIGHT ON
He wanted revolution – calm and sneaky yo
He formed a cult, called Aum Shinrikyo
He gassed the subways, with nerve paralyzer
on a Friday morning where none were the wiser
Goin to work with their briefcase and tie
in the sarin gas trap where 12 people died
David Koresh, thought he was the best
New religious prophet with that kinky group sex
Whack Branch-Davidian, brainwashed followers
Loved it when they’ll eat dirt, made them swallow more
crazy lies while they stack ammunition
In the Waco compound, the battle of attrition
ended with a gunfight, David burned it down
Laughing as the fire blazed like Nero’s smoking crown”

To this point the review might seem unnecessarily harsh, but it’s worth noting that to an open-minded rap listener used to unconventional beats and rhymes “The Foreign Globester” is a fairly satisfying experience. Some songs even come close enough to traditional hip-hop to not throw much of a curveball to the audience at all – “You Got It. I Want It” would fit perfectly into “Adult Situations” with little effort, and the up-tempo “Last Nite Ruled” is a fast paced fun stomping hip-hop romp through sex, drugs & debauchery. Ultimately it’s a little hard to figure out what the progenitors of this release were going for. If they wanted to make a strictly nerdcore hip-hop collaboration they could have done a good one, and if they wanted to do a progressive rap album with Motion Man they would have done a good one, but “The Foreign Globester” is an uncomfortable mishmash of the two that’s occasionally entertaining but ultimately too schizophrenic for most consumers.