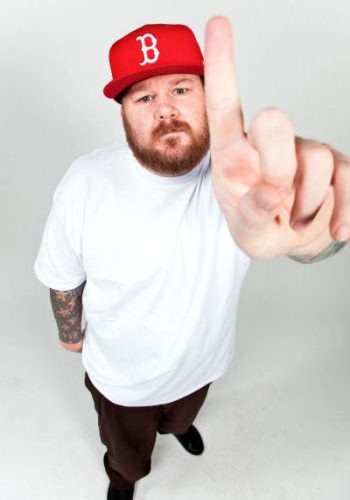 Both physically and musically Big B is a large man. He has to be to fit in all the genres that have influenced him and come out in his work. Big B’s latest effort is Good Times and Bad Advice

, and RapReviews caught up with the very busy Suburban Noize emcee to find out more about his good times, the bad advice he’s received, and some of his non-musical artistic endeavors.

Adam Bernard: Tell me about your latest effort, Good Times and Bad Advice. Do the two always go hand in hand?

Big B: Not necessarily. I have had good times listening to people’s fucked up advice and now it’s time to do it my way. Most people that try to give you advice are people that failed and think they have all the answers.

AB: In the spirit of your album’s title, what’s the best time you’ve ever had, and what’s the worst advice you’ve ever been given? And please tell me, whatever the latter was, you didn’t take it!

BB: The best advice would be just to be myself and do what I do. I’ve had so much bad advice over the years I can’t even single out one thing. I’ve seen far too many artists that chase after whatever is hot at the moment and try to cash in, and they tell you to do the same. That type of success only lasts while whatever trendy is in. I’m trying to go the distance and have a catalog of music that people will enjoy for years to come.

AB: You work with Everlast, Cisco Adler and Scott Russo on this album. That’s quite a bit of diversity. Are the songs you do with each of them tailored to their style, or did they find a way to tailor what they do to your style?

BB: I’ve always been proud of the fact that I’ve never paid for collaborations I’ve done. I’ve had everyone on my record by becoming good friends with these guys over the years, so it made sense to have them on this album. Some of them we just jammed together and hammered out a song, others the track was already written and they just came in and added their own flavor to it. It really was dependent on how much time we had together.

AB: Like your previous efforts, Good Times and Bad Advice

has a rock influence. With that in mind, do you consider yourself rap-rock, or something else entirely?

BB: I make feel good music with a hip-hop flavor. This is the kind of music that a person can kick back, drink beer, and BBQ with their friends to, but at the same time it can be the perfect music for a party. I feel that I have written an album that I can look back on and be proud of, and that can stand the test of time.

AB: What do you feel the rock influence provides that you might not have if your music was strictly rap?

BB: I’ve always been a fan of all genres of music so that is what my music has become. It’s kind of a melting pot of all sort of different styles. I’m a fan of Johnny Cash, Social Distortion, Eric B. & Rakim, Biz Markie, for sure Everlast. I went to a lot of punk rock shows as a teen, but the first big one was the Beastie Boys. Enough said. Obviously all those influences come together to make my music what it is.

AB: How much of a role does honesty play in your work?

BB: it’s everything. If I’m not honest and making myself happy then I might as well get a 9-5 job, because I would just be going through the motions. With this album I am in a different place and I wanted to be known of more of a songwriter. If my fans don’t take to the change then I guess they were never really fans in the first place. I write my music as an outlet for me, I don’t write music thinking what would the fans like. It’s the fan of this album that will use my music as a voice for them when they hear me sing about something or a situation that they can relate to.

AB: When you look at the entire Subnoize roster, do you think of yourself as different from the rest of acts?

BB: I’m different, but Suburban Noize has one of the most diverse rosters out of any label. They have hip-hop, rock, metal bands and alt-rock groups. I fit in perfectly because my music is a little bit of everything and is not confined to one genre. I’ve done the major label thing back in the day and it just didn’t work out. Major labels want you to be whatever is hot at the moment. Suburban Noize doesn’t tell you to be anything but yourself and write the music you want to write.

AB: In addition to your music, you were also a regular on Inked on A&E. How did you end up becoming a part of the show?

BB: I’ve been good friends with Carey (Hart) for years and have worked with him to build the Hart and Huntington name. When A&E wanted to make a show around what we built, it made good sense at the time. It was a great look for all of us involved because it showed what we were building.

AB: From your rhymes to your tattoos, art is clearly a big part of your life. What are some of your other artistic endeavors that people may not know about?

BB: I enjoy building cars! Not just any cars, but classic cars and hot rods! One thing most people don’t know about me is that I used to work at a body shop. I always try and stay busy, even when I’m not out on the road. I’ve got a clothing company called Controversy Sells that I’m involved with and I have a lot of input in the designs that we put out.

AB: Finally, the title track from Good Times and Bad Advice is going to be used for MSG’s summer advertising campaign. As a Knicks fan I must ask, when are these “good times” going to arrive?

BB: I am from the West Coast so I can laugh at that question.