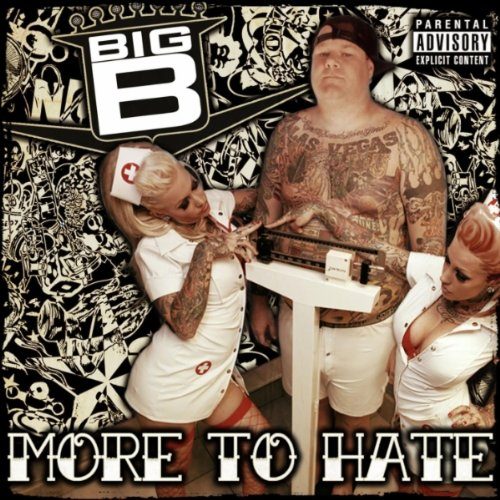 “Big B, yo remember the name
You can love me or hate me but it’s still the same
My music still gets made, my bills still get paid
Still run this shit with no radio play”

Big B is a seven year veteran of the rap game dating back to 2000’s “Menace to Sobriety” with OPM. You would think somebody who’s been banging for that long would be better known in the mainstream but “no radio play” definitely goes down as one of the most accurate things a rapper has said on wax. “No video play” would also be apt. “No club play” would have been equally fitting. Other than other Suburban Noize releases reviewed on this website, I can’t remember seeing Big B anywhere. What’s really odd is that his Wikipedia page mentions he was on the second season of A&E’s “Inked,” a show I’ve actually watched from time to time, and I don’t remember seeing him there either. It’s not as if he’d be an easy guy to miss – he’s an overweight white man with more ink on his arms than in the Gutenberg Bible and a giant tattoo of the Cadillac logo on his belly. Even in a loud and colorful place like his hometown of Las Vegas, Big B is the kind of man who would stand out in a crowd.

As noted on both the title track “More to Hate” and the above quote from “White Trash Life,” Big B aims to be the hip-hop representation of in his own words “this white boy shit” and the man who is “the underdog in the land of the hardcore.” Now there’s two sides to this coin which both deserve to be looked at. One side is that Big B’s not claiming a street credibility that would come off as entirely phony, not trying to make hip-hop music to be accepted by the ghetto, and it’s easy to respect his version of white boy punk rock rap as a result. After all when your record label is called Suburban Noize you’re not trying to fool anyone – you’re representing a walk of life that has nothing to do with hip-hop’s roots in the concrete jungle. B’s honesty is refreshing to a fault.

The other side of that coin is that his honesty gives his music true authenticity, which enables you to actually relate to songs like “Counting Pennies,” but that doesn’t necessarily make Big B the most pleasant artist to ever flow over a beat. Calling Big B’s vocals “gruff” would be the biggest understatement of the year. Listening to him rap you would assume he downed two bottles of tequila and smoked a whole box of Cuban cigars before ever recording session. This doesn’t allow for much vocal tone fluctuation or decibel emphasis in his delivery. He can either speak softly or speak loudly, and he tends to do the latter way more than the former. B shouts his way through songs, occasionally trying to warble an off-key line or two, and his singing is definitely poor cousin to his rapping. On a positive note B does exhibit good breath control in the studio, and his diction is fairly clear compared to some similar contemporaries like Dirtball and Everlast. The problem is the latter two have much more pleasant vocal tones on their raps than B does.

“More to Hate” is an interesting record, but it’s not the easiest record to listen to. The musical production can support Big B’s gruff vocals in some cases such as the club oriented “Looky Looky” or his duets “Million Miles” with Tech N9ne and “Living on the Edge” with Sen Dog. It’s obvious Big B has been paying his dues for a long time, getting little to no mainstream exposure in the process, and that he has earned the respect of a lot of credible hip-hop artists in the underground for his honest rhymes and passion for delivering them. Unfortunately for B “More to Hate” is destined to be a niche record, as is the rest of his catalogue past present and future. B gets all the credit in the world for not pretending to be anything he’s not, but even a reviewer as open-minded as I am has a hard time picturing fans of Nas, The Game, Jay-Z or Scarface getting down with Big B’s gritty and gruff voiced white boy rap rock.