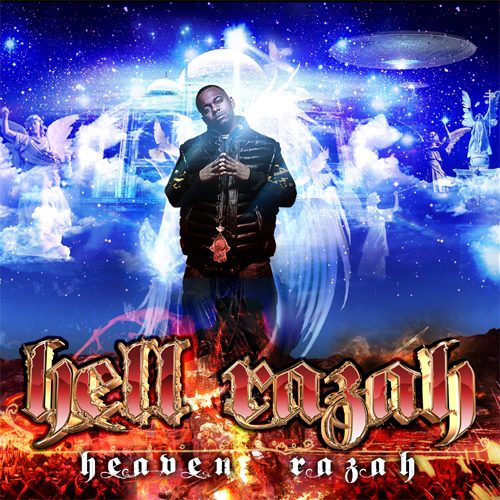 In April of 2010 rumors surfaced online that former Sunz of Man member and long-time Wu-Tang affiliate Hell Razah had suffered a brain aneurysm and was in a coma. Ominously Razah’s Twitter account fell silent at almost the exact same time and hasn’t been updated since. When Razah’s label Nature Sounds sent out the following tweet, it all but confirmed our worst fears: “Please keep @Razah_Rubiez in your prayers. He’s a strong brother who needs privacy while he focuses on his recovery.” Speculation on the internet has been rampant ever since – what really happened to Razah, what does this mean for his recording career, and how is he doing these days?

Sorry – “Heaven Razah” won’t answer any of those questions. HR either had enough material recorded for Nature Sounds to compile it into an album and release it, or he recovered enough to finish the album he had started. To be perfectly honest and possibly offensive (and I do apologize if it is) I’m not sure I’d be able to tell the difference between his flow before and after brain injury. That’s not to imply Razah’s not an intelligent emcee – in fact he clearly takes his time and thinks about the meaning behind each word he spits for both himself and his listening audience. He takes after fellow former Sunz of Man member Killah Priest a lot in that respect – in fact they often sound like brothers from different mothers. What sets Razah apart is how SLOW he is. Priest may at times sound like he’s spitting drunken monkey fu, but Razah sounds like he’s binging on a cocktail of methadone and vodka. Each syllable falls from his vocal chords like it was locked up in jail for decades and had no idea what to do when finally freed.

Razah may have gotten slower with each passing year, but that didn’t stop 2007’s “Razah’s Ladder” from being very well received. Long time fans find Hell Razah’s deliberately slow delivery charming – it’s the hip-hop anthesis to artists like Talib Kweli who collide with bars packing maximum information density onto every beat. As such it was honestly quite shocking to hear the first single leaked off his latest album “Heaven Razah” at such a fast tempo musically AND lyrically. Even odder was that the Godly rapper was spitting raps with a man widely regarded as so offensive he got kicked off a major label – the infamous R.A. the Rugged Man. I suspected he might be on “Return of the Renaissance” before I even heard it, because the name reminded me of the infamous underground track “Cunt Renaissance” he did with Notorious B.I.G., though I conceded it could also be a coincidence. Playing the song left no doubt though:

Razah: “Rensaissance ’76, some say heavenly sent
My pitch got my enemies sick
Now I’m back independent as Prince, a young black industry pimp
that’ll flip more money that’s spent
More flows for your memory chip, when I empty a clip
I don’t miss like the Kennedy hit
I’m Max Julien, the millionaire mind inside a hooligan
Got chicks that’s Peruvian that slip toolies in
clubs and parties, the project Marcus Garvey
Turn the hood to the woods or a dark safari”

Rugged Man: “Yo, your physician got you worse crackheads
Man with the plan get you needed them damn meds
The corporations controllin the airwaves
They on your brain, you ain’t nuttin but their slaves
The Feds readin your Twitters and your Facebooks
They be tappin your cells, trackin your smells, put you back in your cells
On TV every politician flip flop
And it don’t stop, amateur porn sites, bitches lick cock
Planned Parenthood debases, the sterilization
of so-called genetically inferior races
Nazis usin eugenics to kill black babies
Well better me and Heaven Razah take it back to the 80’s”

As amazingly rapid-fire as Razah’s delivery is, the problem is he’s upstaged by the even speedier and completely unapologetically crass Rugged Man in the second half of the song. Thankfully that’s not the case on the rest of the album, though let’s be clear about one thing – if conspiracy theories are not your cup of tea then “Heaven Razah” may not be either. Razah has always been an artist who sees nefarious agents around every corner, the illuminati plotting against humanity in shadow governments shrouded in secrecy, and the opening to “Negro Angelitos” claims with no hint of whimsy or humor that the steeples of church buildings are actually rockets or missiles in disguise “ready to launch” at a moment’s notice. He’s deep in this shit:

“For the love of my people, I draw blood prophecies of Ezekiel
When I write lightning strike at the top of the steeple
Demons fleeing outta windows of the buildings of evil
I’m having Obidiah dreams of America’s eagle
Sing a song while I stand in the midst of Lebanon
El Raziel Metatron, the messanger God
Sun shine off the iPod and light up Mars
[…]
Let her run and tell the Romans that I send my condolence
How I drink out of Miriam’s Well, may the truth prevail
To have justices face unveiled
Heartless harlots of Josiah, daughters of Zion
Forgot about the first law, slept with a python
A six point star on the top of my right arm
The great grandson of David, Rebekah’s favorite”

Good luck trying to untwist the different layers of mysticism, Egyptology, science fiction and Christianity twisted up in a Hell Razah rap. He’s just as likely to claim to be saved by an angel as to be beamed up to heaven by a UFO. “They watchin us” says Razah. Who is watching us? Nobody – and everybody. I’ve often wondered if even Razah understands the point he’s trying to make, but that doesn’t make his music any less fascinating or interesting to listen to. Only an artist as intricately wound as Hell Razah could sample from “The Mack” and flow over symphonic strings about 10 commandments taking him straight to Atlantis before the sun sets over Planet X on “The Book of Heaven Razah,” which he of course claims was written on Papyrus paper. “It’s like the devil signing Jesus to a record deal.” He offers these random statements in an almost stream-of-consciousness fashion, at times sounding supremely profound, and at other times like a babbling fool who just happened to stumble across something sounding wise by accident. You can’t ever be 100% sure of which.

“Heaven Razah” is undoubtedly one of Razah’s most well produced and complex albums, layered up with hard hitting beats and pop culture dialogue snippets. You have to be willing to swallow a bit of BS lyrically on songs like “Medical Kush” and “Cinematic,” but at the same time they’re balanced out by cuts like “A Brooklyn Tale” featuring Shabazz the Disciple and “My Testimony” featuring Darnell McClain. When Razah can be kept focused and on topic he ranks as among rap’s most fascinating and powerful hip-hop artists. At other times he lives up to the words of “Brooklyn Tale” when he says “the money and the fame just drove him insane.” Maybe they did quite literally in his case, but I can only hope that in the time since his tweets went silent his mind did not as well. Though he can’t decide for five minutes at a time who or what is responsible for the ills of the world, his passion for bringing the truth to light as he sees it whatever that might be is always an interesting listen. Hopefully we can all look forward to more of Razah’s rubies.