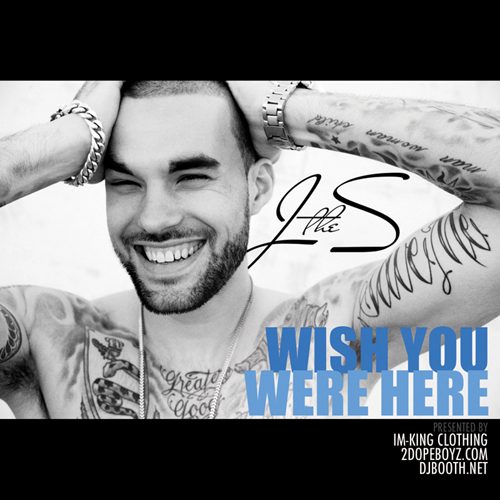 J the S’s path toward a hip hop recording career was a fairly unconventional one; after spending his early years in the West Indies, he moved with his splintered family to Massachusetts and bounced around multiple cities in the Bay State and Vermont. Following a series of mixtapes, his 2010 free “street album” “Wish You Were Here” arrives as a prelude to his upcoming debut “The Last Days.” “Wish You Were Here” features fourteen new tracks with all original production and numerous collaborations.

J the S sports an East Coast delivery and swagger, embodying his hunger on the impressive opener “Middle of the Storm” and the thought-provoking “Can We.” Production comes from numerous producers, and the beats are consistently good. Although the music ranges from bouncy and horn-heavy to rumbling and street-ready, the arrangement and sound are strong throughout. The most notable contributor is acclaimed Australian beatsmith M-Phazes, who lends upbeat, energetic tracks for J the S to mold. “The Last Party (Remix)” is a rich party jam with a clever concept. M-Phazes’ beat has choppy trumpet blasts and descending trombones, and the notable team of J the S, Nipsey Hustle, Dre Robinson, Danny McClain, and Jadakiss spit intriguing rhymes about a last supper of sorts. Jada’s closing verse is a highlight. J the S’s best performance is found on “Eyes Wide Shut (Prison),” where he reveals,

“My pain, my rage
Shit, my mother got a boyfriend my age
At least he treat her right and don’t beat her
Like that other motherfucker
Me and pops hustle ’til them fuckers come to cuff us
My grandma prays for hope in the sky
My dogs with their guns roll in a line
It don’t take an Einstein to notice the lies
Wise up, open your eyes”

“Started off in the West Indies ’til some political corruption
Forced us off with some criminal charges
My father, we moved to Nevis, but it was harder
So now I’m back in the states, Springfield, Mass
At my grandparents’ place
And to Greenfield where I hate the small-mindedness
Made me feel like an outsider kid
Then to VT for a short stint before my parents officially split
Where would I go? Lickety split
Family and friends in the Bean came as a team
Never looked back, fuck that, love that
Had somethin’ to say, I found a way to say it
They say life is a game, I found a way to play it
And we can rap ’bout the perils of the hustle
If you ain’t strivin’ for a way to change it, shut your face kid”

At his worst, J the S strays into the proverbial with his celebration of lavish living like on “Marvelous.” I like to think that “Handcuff Sex” and “Peeeuuwwm” could have been omitted in favor of some more substantial offerings. He often references his extensive body of tattoos, like on “The Painted Man,” and I’m afraid there’s only so much that can be said about one’s body art.

The second half features a string of high-profile collabos beginning with “The Buy In” featuring Crooked I and Rich Rivera. “Bury Me” has a funky dance track and echoing chorus by Annie Lee, and Greater Good impresses on the posse cut “Hurt ‘Em.” The closer “Change” is thoughtful and well-produced.

Is J the S a star in the making? Well, it’s hard to say. He’s fairly charismatic, a decent lyricist, shows some mainstream sensibility, and appears to have at least a few useful connections with established rappers and producers. One of the reasons it’s so tough to forecast based on a new artist’s mixtape or “street album” is that you have to assume he’s saving his best material for his debut album. In any event “The Last Days” ought to be worth a listen when it arrives.