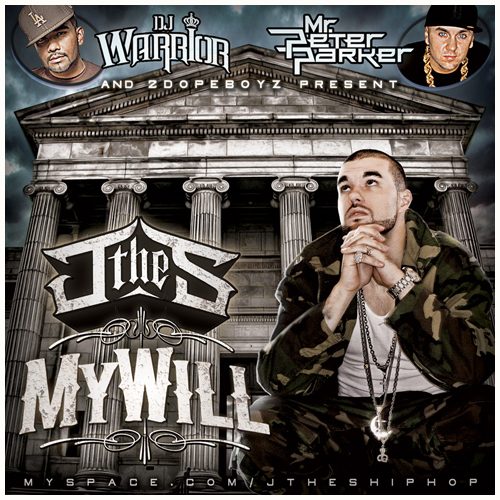 Just looking at the back cover of “My Will,” the street album has a lot of good things going for it. For one, it’s endorsed by 2dopeboyz.com, easily the best website for quality hip hop exclusives. It also has a guest list that includes B.o.B., Saigon, Kool G Rap, Emilio Rojas (formerly Raks One) and Donny Goines. The production credits feature a lot of unknowns but I was still quite excited to listen to the tape and hear what this J the S character has to offer.

I’ll avoid cynicism (for once) by using the word underwhelming, and instead describe my reaction as surprised. For one, I realized that J the S is in fact that white rapper who had a single with Ras Kass a few years back. No idea why he changed a strange name to a wholly inconvenient one, but I recall that particular single being pretty good so I was still engaged with the album. The opening, titular joint has kind of innovative subject matter, dramatically reading his will as if he might get killed before he adlibs it © Loso, in case you ain’t know so. Raf Moses’ production is a kind of rock/boom bap that works quite well because of the song’s humble length and Jake’s ability to keep up with the tempo. Next up is “Oil,” a title that puzzled me but excited me because it was followed by “featuring Saigon.” It turns out my worst fears were confirmed: it really is a song about gasoline. The chorus is kind of unintentionally hilarious, sounding too much like “Lean Like a Cholo” to take seriously. But miraculously, the track is made worth listening to thanks to Saigon’s short verse:

“The O is for the obviousness
The way they blatantly lie to the people proves Illuminati exists
The I is for Islamic nations they attack
Al-Qaeda did 9/11, so why are they in Iraq?
The L is for the love of the lootin’, what it can do to people
When money’s the root of evil, or is it Lucifer’s needle
He injects it into the vein of the seeds
Then they grow up wanting more than they need, it’s called greed”

Unfortunately, the album doesn’t have enough of these kinds of saving grace verses to save it from repetitiveness and poorly written hooks. It becomes bogged down for a while by J the S’s average solo tracks, especially “Automatic,” a failed attempt at using a sped-up voice to accompany him on the chorus. What’s amazing is that there is a great variety of producers contributing hereâ€”from Matty Trump to Reality to Special Blendâ€”and yet not a single beat is truly memorable an hour removed from listening. This often leaves Jake by himself in keeping things interesting, and he simply doesn’t possess the exceptional flow or lyrics to do so. The thing is, J the S is from fucking Boston, where in the hell are the DJ Premier and Statik Selektah beats?

Even so, there are a few highlights among the ordinary, including reliably entertaining verses from Emilio Rojas and B.o.B., the latter declaring “you know what they say, misery loves invitations” in his typical post-Aquemini Andre 3000 mimicry (I’m jokingâ€¦kind of). Also, J the S decides to save his personal best rapping for the last track (“These Tales”), humorously starting his second verse: “Half of these crooks, are backwards like Japanese books.” Too little, too late, but consistently average is a hell of a lot better than consistently bad.