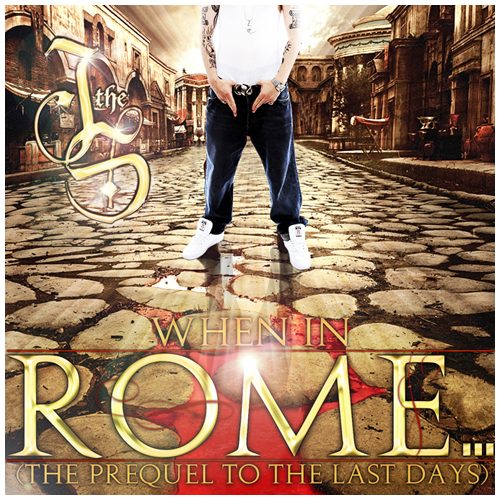 When I first encountered J the S, it was on a DVD that I received at Boston’s UndergroundHipHop.com retail store. He was then known by a different pseudonymâ€”Jake the Snakeâ€”which, for legal reasons, was changed to his current one (damn you, WWE). What I heard was dopeâ€¦a young cat spitting street tales over a very soulful instrumental. (He also had a briefâ€”albeit hilariousâ€”tale about Jedi Mind Tricks’ Jus Allah sleeping on his couch.) Thus, I made sure to keep an ear to the streets and check for this Boston native’s official debut.

Though I apparently will have to wait (the mixtape’s cover promises that this is indeed the prequel to J the S’s first official LP “The Last Days”), this mixtape does its job in that it holds me over well. “When in Rome” has a handful of high-profile underground guest spots (Skyzoo, Joell Ortiz, and Ras Kass) as well as recurring collaborators (The Greater Good, Annie Lee), though one wishes that he worked with some better known producers. Mind you, some of the best beatmakers in the game are homegrown, in-house talent (see Lupe’s personal producer Soundtrakk, or even Nas’s homie L.E.S.). But the beats are, for the most part, disposable. The intro, “Right of Passage,” sounds like a discarded concept for an ESPN SportsCenter theme song; and “Pump” and “No Love” sound like poor imitations of Dr. Dre and DJ Toomp, respectively.

However, J’s primary concern is lyrics, and he’s definitely got a lot of potentialâ€”his storytelling and wordplay are definitely on point, and he has a bright future ahead of him. Peep, for example, his collabo with Ras Kass. Ghostface hook-biting aside, he does drop an entertaining sixteen:

“Now I ain’t know about candy paint cars and ice grills
I’m East Coast, I go hustle with them mic skills
How to rock a hoodie, and pull the ill chick in the spot
And get my foot in the door, and we pickin’ the lock
A young kid flippin’ off the cops
Who was jealous ’bout the money they was getting off the block
Like my pops, and now the legacy passed down
We all coutin’ G stacks, the Hennessey passed ’round
My friends watch the news, see they enemies clapped down
They cheerin’ like a sports game; It’s all pain that fuels me
An old cat scooped me and schooled me
Said, “Snake, don’t be distracted by the pussy and the jewelry
(I know) Now my focus is clear
No more cigarette smoke in the air, approach holdin’ a beer
Got a drinking problem, runs in the family
Mom and Dad are crazy, the son of insanity”

J’s definitely got skills. And despite the lackluster production, he still manages to shine throughout the tapeâ€”peep the “Get Low Remix” (where he claims that he’s “fresh as a bleeding fetus”â€”not a pleasant image, but still a dope punchline) and the reflective “Roll, Light, Smoke,” which also happens to be have one of the best beats on the album. All in all, J the S has a bright future on the horizon. But before he can can successfully DDT the game, he needs the proper boom-bap to back his bars.