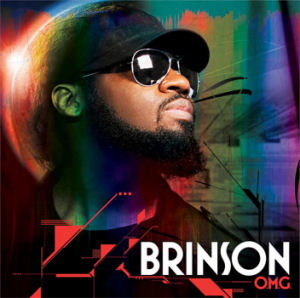 If you expect Brinson’s “OMG” to be a shallow reflection of the text-craze that has invaded rap lately, you’ll be pleasantly surprised. “OMG” stands for “Oh, My God,” not the blasphemous, but common, expression of surprise, but instead it literally reflects Brinson’s awe for his god. Yes, Brinson is another gospel rap emcee trying to evolve the genre. Gospel rap has long been seen as amateur rap whose fans are more forgiving due to the message being conveyed. Brinson and fellow contemporary gospel rappers have been making a concerted effort to expand the appeal of the music through incorporation of current trends. For a secular rapper, this would be considered selling out, but with the purpose of spreading their message further, Brinson’s pop-rap oriented tunes are more accepted within his intended audience. “OMG” isn’t a complete success, but blends gospel rhymes with secular beats well enough to appeal to fans of the genre.

“Don’t Rap No More” gets to the point right away as Brinson proclaims “if you ain’t trying to save souls, don’t rap no more” over C-Life’s menacing southern crunk synths. It’s a surprisingly aggressive take on gospel rap as Brinson seems to cockily exalt himself above secular rappers. “Beastmode” gives us more of the same as Brinson balances his love of God with his confidence in his own skills and his wish to stay away from the perils of the street life. “Going God” continues the street rap/gospel rap blend as Brinson proclaims:

“I wrote it for the block, but they bump it in the church, boy
Diligent, heaven sent, I got that work, boy
Word in my belly, undershirt, boy
I’m back on it, it’s the water walker
Spirit led, daily bread, that tongue talker
My homie’s up north, like a New Yorker
I’m talking heaven, the whole thing, and not partial
I’m pointing out them flames, call me the fire marshal
Swinging round your hood, Peter Parker”

The main problem with Brinson’s brand of gospel rhymes is that it is highly unoriginal. Each verse is a combination of secular rap techniques, dope boy rap phrases, and gospel rap clichÃ©s. If he isn’t claiming he’s “got that work” like the Big Tymers, Brinson is busy putting together a weak Drake punch line. It’s not bad at all, but it also fails to rise above average. Brinson shows signs of life when he isn’t stuck copying secular trends. “Green Grass Theory 80/20” has one of the oddest titles I’ve seen, but the smooth vocals on the hook and Brinsons’ straightforward preaching form a smooth, soulful southern jam. “Dirty Laundry” finds Brinson doing a good job evoking paranoia and struggle in living the righteous life over a moody, dark beat courtesy of C-Life. The rest of “OMG” oscillates between extremes. Brinson declaring “every knee will bow and every tongue will confess” is a little too fire and brimstone for my taste, but the smooth, pop influenced vibes of “Breaking Down” do a great job of celebrating Brinson’s faith without becoming overbearing. Perhaps the only truthfully bad song on the entire CD is “Over The World,” which straight rips a TI song on the beat and throws some off-pitch autotune on the hook.

Brinson’s message is clear in almost every song found on “OMG.” With the exception of two unnecessary skits, the album stays on track with its Christian message. Because of this, it is unlikely Brinson’s music will appeal to a large number of rap fans. On its own, it is just not that good as music and its Christian message is overbearing to those who do not adhere to the religion strongly. For those who dig Christian rap and high energy beats, this CD will likely fulfill both desires without compromising either.